'It Was A Master Stroke' 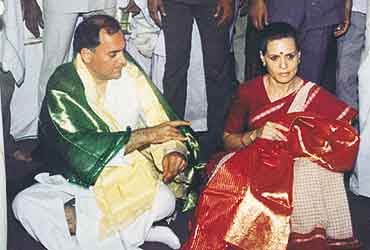 outlookindia.com
-0001-11-30T00:00:00+0553
For over 35 years Sonia Gandhi has been trying to be Indian, discarding her upbringing, dress and food, laboriously learning Hindi and picking up so many little Indian customs that Rajiv Gandhi swore she knew more about being Indian than he did. She even slammed down the phone on her mother when she dared to suggest that Sonia move to Italy after Rajiv’s assassination. And yet, it was by doing what many would call a most un-Indian thing—going over the heads of her political advisors and renouncing the prime minister’s job—that she proved once and for all that an Indian can be born anywhere, even in a remote Italian corner called Orbassano.

Hours before her renunciation, which many say is her—and India’s—finest hour in recent politics, a worried group of historians, jurists, economists and social activists got together in Delhi to make a last-ditch attempt to prevent her from stepping aside because of what they feared was a BJP plot to divide the country into real and not-so-real citizens. "Objecting to Sonia Gandhi’s right to become prime minister because she is foreign-born," points out historian Tanika Sarkar, one of the 500 who attended the meeting, "is not only against the Constitution but against the very heart of our culture of inclusiveness. It is the same issue the Sangh parivar is raising against Muslims and Christians, abbreviating citizenship and making some more of a citizen than others."

"It’s a silly issue," agrees Bengali writer Sunil Gangopadhyay. "We Indians go and settle all over the world, and they face no such limitations. It’s against the law and against our traditions. Sonia Gandhi may have started out as a foreigner but she became an Indian." The problem, according to Gangopadhyay, is that "half of Indians, including my own wife, don’t recognise that. She feels that we were under foreign rule for so long and doesn’t like the idea of being ruled by a ‘foreigner’".

Film-maker Shyam Benegal blames the BJP’s propaganda mill for planting the seeds of this "absurd" idea into the minds of people. "Once a person has been given citizenship, how can he or she be a foreigner? And yet, when the BJP says something like ‘We are a nation of one billion people and couldn’t we find an Indian-born person for PM?’ you begin to doubt whether this may in fact be true."

Some, like historian D.N. Jha, point out that all Indians are, in one way or another, of foreign origin. "Historically, none of us can claim to be Indian in the real sense of the word. Even the word Indian is not Indian but of Greek origin. We are all foreigners in India—from the Aryans to the Kushanas to the Arabs, the migrations from the East and Southeast, the British...."

Besides, as Sarkar points out, "this debate that the BJP was trying to raise violates the very values of the freedom struggle. The independence movement was not against foreigners. What about Annie Besant, A.O. Hume, Sister Nivedita, Nellie Sengupta, all foreign-born and yet who played an important part in the struggle. It was against colonialism and those with imperial aims. Even Indians can serve imperialist purposes."

Agrees Kannada writer U.R. Ananthamurthy, who plunged into politics this elections as a campaigner for secular parties: "The BJP is a typical example of how you can cultivate emotional hostility towards foreigners and at the same time be intellectually servile to America. It’s funny how most families I meet in Bangalore aspire to send their children abroad, while here is foreign-born Sonia who is a true Allahabadi. " Moreover, he says, "it’s a most un-Hindu way of looking at it, this whole business of foreign origin. As far as the common people are concerned, Sonia is a widow who lost her young husband. This feeling goes so deep in our culture that no BJP propaganda can change it".

It was Sonia, according to Ananthamurthy, who turned out to be more Indian than most Indians. "Tyag, renunciation, is held as the greatest value in the Indian ethos." In fact, according to him, her being a foreigner was never an issue. The question topmost on most thinking Indians’ minds was: Does she know India? "It takes a lot of knowing. And a sense of identity—you need to belong somewhere but not be totally identified with any particular caste or sub-group. Sonia, like the the rest of the Nehru-Gandhi clan, is not rooted enough—a great qualification for a prime minister."

Film-maker Saeed Mirza agrees that Sonia’s foreign origins may have something to do with how wonderfully "unfettered" she is by the usual baggage of being Indian. In a way he is grateful for that: he would not otherwise have been witness to what he calls "that moment of grace in our scoundrel times".

"I have never seen such a thing in my life, someone turning down the PM’s seat," enthuses Mirza, "I’m a cynic but I think she meant it. We live in a graceless age where the line between the underworld and overworld has been obliterated; but this was a moment." She touched a chord, Mirza says, that wiped out the "ridiculous" way the BJP was trying to play up her foreign origin.

There were others who were equally moved by The Moment. Says playwright Girish Karnad: "This luminous gesture of her self-sacrifice will stand out—she is the Great Mata now. And the dignity with which she did it cleared any doubts I had about her abilities. It was a master stroke. I couldn’t have scripted it better." A sentiment echoed by Benegal: "It makes for a great movie. What a wonderful plot. You rarely see this sort of thing."

And playwright Vijay Tendulkar: "She has convinced me about her sincerity, it is heartening to see someone trying to meet the challenges." Also Gangopadhyay: "With that single gesture, she has risen above the Nehru-Gandhi clan and can be bracketed with the Mahatma himself." Even the usually sceptical Ramachandra Guha admits "it was her finest moment, very human and touching". The social scientist, though, won’t go as far as to bracket her with the Mahatma or even Nehru. "But she certainly came out better than her mother-in-law, who imposed Emergency rather than step down. She has done herself proud."

"She has done us proud," insists Benegal. "We have shown the world that you can be an Indian by commitment."

But there are those who warn that politics is not about theatre. Says historian Irfan Habib, "The real message that has gone out is that the new government has succumbed to pressure. Sonia’s gesture may have raised her status among editors but the real fact is that the BJP’s writ is still running even after losing the elections."

Khushwant Singh, while conceding that Sonia Gandhi did the "sensible" thing by stepping aside, still wishes she could have been PM. "Our credit would have gone up enormously in the world’s eyes."

Just who won on the foreign origin issue may not as yet be clear, but of one thing everyone is certain: "One Indian won by her renunciation, another Indian—Atal Behari Vajpayee—lost his chance in history by his not disinterested silence."