'It Was A Defining Moment, I Went To Art School' 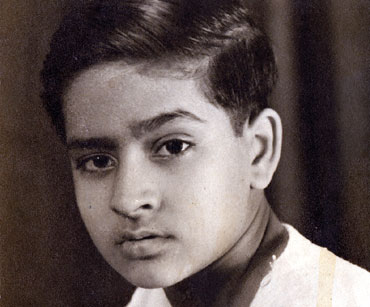 outlookindia.com
-0001-11-30T00:00:00+0553
Art started off in my life quite literally as an accident. At the age of eight, while on a holiday in Pahalgam, I fell into a river. I was saved but my leg was so badly injured that I spent the next two years in bed, undergoing a series of operations that did little to help me walk but resulted in my going deaf as well. By the time I was 13, my father was seriously concerned about my education. He brought me books to read, but since I hadn't yet got to the class where they taught English, the books were in Urdu and far beyond my age.

Then he heard of a new school for the deaf and dumb in Delhi. He took me there. But all the children there were born deaf and dumb and used sign language. The headmaster who became close to me noticed that I talked less and less and was resorting to sign language. He advised my father to pull me out of the school.

I was back at home. It was at this time, lying idly in bed, that I began doodling. My doodling was perhaps no different from other children's at this age, but my father was desperate. He decided to put me in an art school he'd heard of in Lahore, some 100 km from home. I was 13, and it was the turning point of my life.

When the British decided to start art schools in every state, their aim was laudable. But no self-respecting middle class man would wish his son to go to art school because there was no prospect of earning a livelihood from it. My school consisted almost entirely of orphans and the impoverished. The school fee was a mere one rupee and you received little education, but were given free paper and other material for drawing. Students came there to learn how to paint signboards.

Luckily, my elder brother Inder was in college in Lahore. I spent as little time in the hostel as possible—going to his hostel as soon as I woke up, having my breakfast there, and going to school from there and returning to his room till it was time to go to bed. Inder became my guiding light, and I absorbed Marxist ideas from him, his friends and teacher, Faiz Ahmad Faiz.

I learnt politics at my mother's breast, almost. She was a kind of foster mother to Bhagat Singh, and the songs she sang as she churned buttermilk were revolutionary songs. I was there with her when she went to see Bhagat Singh before he was hanged. Brought up in a household where people talked nothing but politics, I thought I'd grow up and become a freedom fighter. Or a lawyer, like my father.

At school, with hardly any friends, I soon grew disheartened. My father tried to cheer me up by getting me a book of Abdul Rahman Chugtai's paintings set to Ghalib's verse. Chugtai was a superstar among artists, with his own printing press where he printed books of his paintings. There was not a cultured family anywhere in North India who hadn't heard of him. "If he can make it, so can you," my father told me. I decided soon after that to join Chugtai as an assistant, one of four or five other students. I became determined after this that I would become a painter and not a graphic artist like the rest of my classmates.

It was at this time that I encountered Amrita Shergil for the first and only time. Sometimes, when the pain in my leg was unbearable, I used to go to browse in a bookshop across the road from my school. The painter Roop Krishna lived above the bookshop. One day as I came out of the shop, three or four paintings came fluttering down from the balcony above. An instant later, Amrita came tumbling down the steps, furious. Later, I learnt Amrita had sought Roop Krishna's advice on her paintings. He thought they were no good and asked her to try and paint Indian themes. But Amrita, who had a very high idea of her own genius, started to quarrel. Roop Krishna, famously short-tempered, cut short her diatribe by flinging the paintings out on the road.

'Having Lived On Watery Gruel, School For The First Time Meant Three Meals'