It Takes A City To Clothe A Village

Kapda or makan? A group called Goonj addresses the basic issue of clothing in remote India. 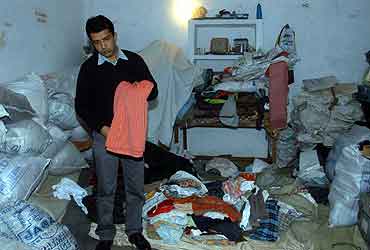 outlookindia.com
-0001-11-30T00:00:00+0553
It's 10.40 pm on New Year's eve: Anshu K. Gupta stops his car outside aiims, alongside a row of sleeping bodies curled up against the cold. His friends and he step out. The car boot opens and out come blankets, folded within each are a set of trousers and woollens. Silently, they place the packages beside the sleeping and return to their cars. Mission accomplished, they drive on to repeat this anonymous drop-off. At 3.30 am they make their last stop by the Modi Mills flyover, on the south-eastern fringes of Delhi.By 5 am, January 1, Anshu and his friends get home, their final midnight run of 2003 complete.

"The biggest problem in our country is still roti, kapda aur makan," says Anshu, founder of Goonj, "yet something as simple as donation of clothes can solve at least one of the basic issues." Goonj's Vastra-Daan programme harks back to one of the oldest forms of charity in India, counted among the nine punyas or good deeds. But what really prompted Anshu and his wife to initiate the project in 1998 was the fact that, for those who don't even make it to the shanties of shining India, clothes pretty much double up as shelter from the elements as well.

Beginning with 67 items of clothing from their closet, Vastra-Daan today transports over 5,000 kilos of clothes per month across India, with help from 300 volunteers. Wondering why we only swing into action when disaster strikes, Anshu asks: "Why do we forget that half our country does not need a disaster to be helped?" Extending the recycling circle beyond the maid, driver and watchman, Vastra-Daan reaches blankets and clothes to the destitute in distant villages. "It takes only 97 paise to transport an old sari from Delhi to Kalahandi," says Anshu, who sources plastic gunny bags at cut price from grain merchants and crams trucks to the hilt before dispatching the packed goods.

To match donors to recipients, Vastra-Daan asks local ngos to send photographs and information about deprived village communities, political/economic refugees, or victims of natural disasters. The request is then carefully processed. For instance, donation camps for post-riots Gujarat were held in West Delhi, from where all salwar kameezes were dispatched to Muslim centres, while the saris were sent to Hindu centres to maximise aid utilisation.

Their experience with recycling garments has also taught them a lot. Salwars often arrive minus the waist cord, which renders the garment useless. Compensating for this, Goonj supplies a 1.5 metre cord along with every outfit. Shoes too are transported tied by their laces, or fastened together to ensure that pairs don't go astray in transit. Nothing goes waste. Rags, scraps, torn clothes and flimsy spaghetti tops, are all turned into bags or pattis—mats that kids in village schools can use as seats.

Goonj today has collection centres in almost every major metro. Minus any funding, it survives by using one-side used paper for correspondence and by selling newspapers (donated by corporations, schools and colleges). Yet, even with minimal running costs, they are still unable to process the sheer volume of desperate requests. If you would like to sponsor a Rs 40 seating patti or donate woollens, blankets, school uniforms or toys, contact Anshu K Gupta at J-93, Sarita Vihar, New Delhi 110044, Tel: 011-2697-2351, Mobile: 98681-46978 or email him at anshu_goonj@indiatimes.com.