Will his junior home minister’s doings be Narendra Modi’s undoing? 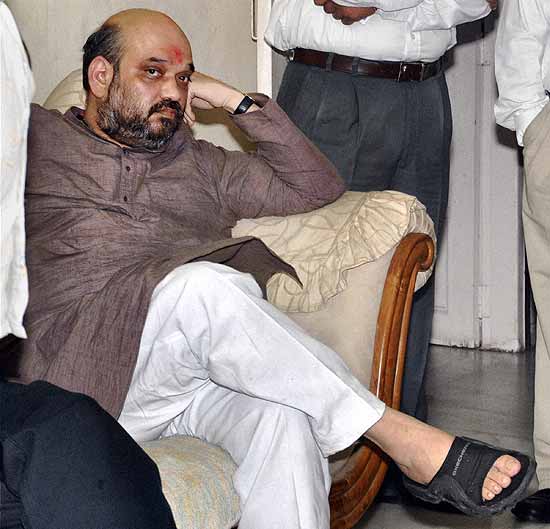 Not even in his worst nightmares would Gujarat chief minister Narendra Modi have imagined that his protege and minister state for home Amit Shah would go to jail facing charges of criminal conspiracy, twin murder, extortion, abduction and destruction of evidence in the ‘staged’ killing of gangster Sohrabuddin Sheikh and his wife Kauser Bi in November 2005. Shah, who surrendered on July 25 after being chargesheeted by the CBI, has been Modi’s junior home minister since January 2003 after the Gujarat strongman’s landslide victory in the assembly polls after the 2002 riots.

For Modi, Shah was crucial in many respects as he was handling all the important cases related to the 2002 riots apart from managing the home and law departments. He is supposed to be to Modi what Modi is to Advani. “In a way, it’s a big setback for the CM because Amitbhai was indispensable for him. He was seen as Narendra Modi’s shadow,” says a secretary in the government.

The case against Shah began rather innocuously. On November 26, 2005, the Gujarat anti-terrorism squad (ATS), headed by DIG D.G. Vanzara, called a press conference in Gandhinagar to announce the killing of “LeT operative and dreaded terrorist” Sohrabuddin in a police encounter by a joint team of the Gujarat and Rajasthan police. Vanzara, who as the DCP of the Ahmedabad crime branch prior to his ATS posting had already carried out more than a half-a-dozen encounters in which 15 people were killed, claimed the terrorist was on a mission to “kill Gujarat CM Narendra Modi” and was intercepted on Ahmedabad’s outskirts where he was killed in a gunbattle.

Things, however, took a new turn in March 2007 when a probe by the Gujarat police established that Sohrabuddin’s killing was a fake encounter. The police admitted this before the Supreme Court in reply to a petition filed by Sohrabuddin’s brother Rubabuddin. A month later, Vanzara, Rajkumar Pandian of the Gujarat police and M.N. Dinesh of the Rajasthan police were arrested.

However, after more twists and turns, the apex court, which was monitoring the probe from the start, indicted the Gujarat police for botching up the investigation and handed it over to the CBI this January. Six months on, the agency has established that extortion was the main motive for killing Sohrabuddin. His wife Kauser Bi and his accomplice Tulsi Prajapati were killed to eliminate the two key eyewitnesses to the encounter.

The 2,000-page chargesheet filed by the agency before a special CBI court in Ahmedabad on July 23 names 15 persons, including Shah, for serious offences like abduction, criminal conspiracy, murder and extortion. According to the CBI, Shah and his trusted police officials—Vanzara, Pandian and Abhay Chudasama—were running an extortion racket in Ahmedabad and used Sohrabuddin, an underworld operative, to extort money from businessmen and builders. Patel brothers Raman and Dashrath, victims of the racket, in their testimony before a magistrate under section 164 of the CrPC, admissible evidence in court, stated: “We were falsely implicated in a firing case, staged-managed by the police with the blessings of Shah. We were first asked to name Sohrabuddin as the person who executed the firing at our Ahmedabad office and subsequently we were accused of hiring the underworld to settle personal rivalries. To settle the matter, we paid Rs 60 lakh to Vanzara, Rs 40 lakh to Abhay Chudasama and Rs 70 lakh to Amitbhai Shah, on whose behalf his middleman Ajay Patel collected money and delivered it to him.”

The CBI has established that the shooting at the Patel brothers’ office was staged by Chudasama, who sought Sohrabuddin’s help. The latter got the job done through Prajapati and Sylvester.

The ATS also picked up Zahid Kadri, another businessman who knew Sohrabuddin, and subjected him to torture. He was let off only after he paid Rs 40 lakh. Kadri too has given his testimony before a magistrate.

After DCP Chudasama’s arrest this April, the CBI summoned Shah’s associates and middlemen Ajay Patel and Yashpal Chudasama, chairman and director of the Ahmedabad District Cooperative Bank. In their video-recorded statement to the CBI, both have admitted to their role in extortion, bribing and threatening certain witnesses in the case. Patel also admitted that he received Rs 70 lakh in three instalments on Shah’s behalf and had the money delivered to Shah.

To make the case against Shah and his trusted cops watertight, the CBI has adopted the following strategy:

With the noose around his neck tightening and the CBI questioning him at length, more skeletons are likely to tumble out of Shah’s closet. Whether Shah reveals any links with Modi to imply the CM was in the know of the extortion racket he and some top cops were running is a moot point. But it’s already stirred a political hornet’s nest.

More from A Special Correspondent