It Isn't Easy, Breaking The Diet 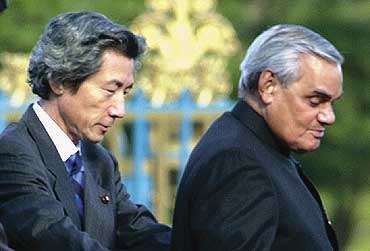 outlookindia.com
-0001-11-30T00:00:00+0553
Indian and Japanese flags flapped in the winter wind last week on the road leading to Tokyo's swanky New Otani Hotel. Inside the plush banquet room, Indians in colourful pashminas mingled with Japan's who's who at ambassador Aftab Seth's reception for Prime Minister Atal Behari Vajpayee. Bonhomie and camaraderie was in the air. A Japanese artiste presented a flawless Bharatanatyam recital; sashimi and chaat were part of the buffet spread; and Vajpayee's speech received exuberant applause. For a few fleeting moments, it seemed the Indian prime minister was indeed making waves in Japan.

But the reality outside was starkly different—the first visit by an Indian PM in a decade triggered little media coverage or public dialogue. The Japanese were too busy obsessing over the birth of a princess to crown prince Naruhito and princess Masako, after a long wait of eight-and-a-half years. Otherwise too, the visit was mistimed: Vajpayee arrived a day after the Diet (parliament) closed for the winter, losing a glorious chance to address it and hog the headlines.

The visit was a delayed (a trip in February 2001 was put off due to the Gujarat quake) return to then Japanese prime minister Yoshiro Mori's visit in August 2000—a call that broke the logjam between the two countries, post-Pokhran II. Strategically, Vajpayee's visit coincided with Japan's decision to look seriously for the first time at South Asia. The prime minister's visit was billed as an advertisement for modern India, hungry for business and in the vanguard of the software revolution sweeping the world.

Politically, Afghanistan cast its looming shadows—both countries reiterated in a joint declaration the need to work together in the global fight against terrorism. India and Japan also resolved to hold regular exchanges between their defence, economic and finance ministers, as well as maintain regular parliamentary contact.

However, the ghosts of the 1998 sanctions weren't completely forgotten. India assured the Japanese that it would not block efforts to build an international consensus on the Comprehensive Test Ban Treaty issue. The declaration noted India's efforts at evolving a national consensus on the CTBT. In pursuance of the lifting of sanctions imposed post-Pokhran, Prime Minister Junichiro Koizumi offered to assist in the Ganga-Jamuna clean-up project, and announced the release of the third tranche of 56 billion yen for the Simhadri power project in Andhra Pradesh and the Delhi Metro. (The second tranche had been released after protracted negotiations last year.)

This could be perceived as a thaw in the bilateral relationship that had frozen in May, 1998 after Japan imposed harsh sanctions in response to Pokhran II. Fresh ODA (overseas development assistance) was capped, with humanitarian aid the only exception. The extent of this can be seen by the fact that in 1997, India had received 132.7 billion yen in ODA which dropped to 11.5 billion yen in 1998, and zero in 1999. For a country which experienced Hiroshima and Nagasaki, Japan couldn't but punish India for going nuclear. "No politician in Japan can support the nuclear policy," says a South Asia defence analyst. "Japan must always take the moral high ground."

For India though, Japan's stand reeked of hypocrisy, protected as it is by the US nuclear umbrella. "This is not about double standards," the analyst says. "It's the real world, and in the real world neither India nor Japan understand each other's security concerns." He says that Japan, surrounded by nuclear neighbours like China, Russia and North Korea, feels India's 1998 nuclear test and Pakistan's response to it has triggered a new nuclear race in the region. And it believes this could undermine Japan's security concerns.

Nevertheless, the sanctions were lifted on October 26, more because of the US. "Japan's foreign policy has to follow the US policy," says Yoshimi Ishikawa, a Tokyo-based political writer, who works closely with Indian leaders to promote better ties between the two countries. "With the Afghan war, the US needs the Indian government to support its policies. The Japanese government followed suit and lifted sanctions, possibly at the US' request."

What's important is that Japan has now started to focus on South Asia, and Tokyo considers New Delhi to be important for maintaining the balance of power in South Asia. Mori made a second visit to India in October this year, as Koizumi's special envoy, not merely to renew the invitation to the Indian PM to visit Japan, but also to discuss cooperation in the reconstruction of Afghanistan. In November, Japanese finance minister Makiko Tanaka visited Pakistan and announced $300 million in aid to it over two years. Similarly, Koizumi initiated an Anti-Terrorism Special Measures Law allowing Japan's self-defence forces to provide non-combat cooperation to the US outside the area "surrounding Japan". On November 9, two Japanese destroyers and a supply ship sailed from the Sasebo naval base for the Indian Ocean, in what was Japan's first foray into the area since World War II.

"There is so much international involvement in the area that the Japanese don't want to be left out," says Kyoko Inoue, a research coordinator on South Asian affairs at the Institute of Developing Economies. In February, Japan expects to host the next conference on Afghanistan; Indian participation is being sought on this. Japan has also sought support from the Indian navy and coastguard presence in the Indian Ocean, for maintaining safe sea lanes for Japanese ships carrying oil from West Asia.

The issue of Kashmir also came up, albeit indirectly. "We spoke of terrorism, including state-sponsored terrorism," said minister of state for external affairs Omar Abdullah. "The Japanese side recognises that India has been fighting terrorism for two decades now." This in itself marks a change from 1998. Then Japan had projected Kashmir as the underlying cause of the N-tests and even talked about a Tokyo conference on Kashmir, with Japan playing facilitator. India had responded furiously then. Mori broached the issue again during his October visit but was again rejected.

"The Japanese don't know enough about the Kashmir issue," says Inoue. "India has to be the first one to make the point, strongly so, that it is one of the victims of global terrorism. Most news these days is about Pakistan and Afghanistan. India needs to take the opportunity (of Afghanistan) to correct Japanese understanding of the issue or risk being skipped over."

Meanwhile, on December 9, Vajpayee and his disinvestment minister, Arun Shourie, met with a delegation of prominent Japanese business leaders and academicians. The latter told their Indian suitors that the main problem in trade relations was poor engagement at the popular level. They pointed out that out of 14.5 million Japanese who travel abroad annually, nearly 3 million visit China and only 150,000 go to India."We suffer from a lack of information," Ishikawa told the Indian delegation. "There are no ads for Indian tourism, we never read about Indian politicians. All we know about India is that it is a land of curry and rice."

Shourie suggested the Japanese tourist traffic to India be raised to 0.5 million over the next year, by taking advantage of the connection between Indian places and Buddhist history. He also tried to exploit Tokyo's growing nervousness about China to woo the industry here. "You should not be feeding what, in your apprehensions, might be a security problem one day," he said, adding, "you aren't strengthening a potential rival when you invest in India."

But if the much-celebrated Mori visit is any yardstick, don't expect much. As Masashi Saito, chairman, Japan System House Association, a 180-member group of IT companies says, "I exchanged about 300 business cards (during Mori's visit)," he says. "I invited Indian firms to exhibit their products at the Japan trade show. But even after one year, I have had no success finding an Indian business partner to promote Indo-Japan software trade." Adds Wipro Japan country head, Shreedhara Shetty, "When Indian IT firms enter Japan, they always compare it to the US standard. Japan isn't well advertised among young Indian software engineers. Our students are only dreaming of the US."

Taxation is another problem, While most taxation treaties cover royalties, dividend and interest, the treaty between India and Japan includes a fourth area, a rather vaguely defined category of technical services. Because Indian software services are interpreted as technical services, companies incur an extra tax burden in Japan. During Vajpayee's visit, Japan promised to review this issue.

Shetty isn't too optimistic. "Whatever profits we make will be nullified in the long run if both governments don't resolve the issue," he says. "It took them almost nine years to sign the tax treaty, it will take as long to modify it."

At present, Indian software exports to Japan remain at a pretty dismal level. According to the Japan External Trade Organization (JETRO), in 2000, 62 per cent of India's software exports amounting to $3.7 billion were to the US; Japan and North Korea combined accounted for just 3.3 per cent or $197 million. Other arenas of bilateral trade tell a similarly sorry tale. In 2000, Indian exports to Japan, primarily of food, raw materials and diamonds, were $2.5 billion, or only 0.51 per cent of Japan's total imports. In the same year, China's exports were $30.4 billion or 6.3 per cent of Japan's total imports (second only to the US). Japanese FDI in India (approvals, not actuals) amounted to Rs 9,935 crore between 1991-2000, as against the US FDI of Rs 50,379 crore for the same period.

These figures would look more cheerful, analysts agree, if the vast abyss of language and culture between both countries were bridged. During Mori's visit to India in 2000, an Eminent Persons Group was formed, comprising academicians, scientists and business heads from both countries. The group met twice this year and filed a report addressed to both PMs. According to some Japanese members of the group, 50 per cent of the proposals were about improving cultural ties; 45 per cent about economic ties; and only five per cent for improving political and diplomatic ties. Ninety-five per cent of the time that should have been spent on developing concrete proposals was wasted on agreeing on procedural matters with the Indian side.

Ishikawa sums it up well. "We can name about 40 American politicians, about 20 Chinese politicians," says Ishikawa. "Only a few Japanese people can even name the Indian PM." Perhaps the best advertisement for modern India isn't the prime minister but middle-class Indians, culturally curious and technologically savvy.

To Kabul, And Back