"It Is Utterly Senseless" 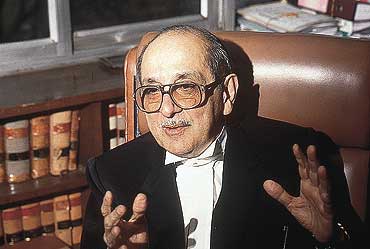 outlookindia.com
-0001-11-30T00:00:00+05:53
Eminent lawyer and Rajya Sabha MP Fali S. Nariman finds it incredulous that issues like Ayodhya continue to be raised at the expense of the tax-paying public. In a country beset with major challenges, the VHP's latest move is another bid at raising a non-issue. Excerpts from an interview with Outlook:

What do you think of the government's move to refer the VHP's demands on undisputed territory to the law ministry?
I think the PM is trying to save the situation and is pouring cold water on the VHP demands, which is trying to stir up a hornets' nest. It is wise not to let these issues take centrestage. The Babri Masjid demolition itself was a disaster, now to follow it up with all this is utterly senseless.

Is it advisable to bring in an ordinance on the undisputed land?
Not at all and I do not think the government will do anything of the kind either. After all there are scores of title suits pending in various courts relating to the Ayodhya dispute for several years now. To bring in an ordinance would be to bypass the entire judicial process. I do not think the government can do that.

What's your opinion on the timing of the VHP demand?
Difficult to say. All I can say is with many burning problems of the day, including one on the border currently, there are people still willing to raise such contentious issues. It beats the imagination.

Is there a way out?
If a compromise can't be reached, the only way out is a legal remedy. It may take some time, but ultimately it will have to be acceptable to all parties concerned. And since all parties have approached the courts, it is only fair that we wait for a decision from them. In a democratic, secular country, the rule of law is above all and should be respected.

Gun To The Temple