Unperturbed by the accusations, the retired Supreme Court judge spells out why he is convinced that the fire inside the train at Godhra was an accident. 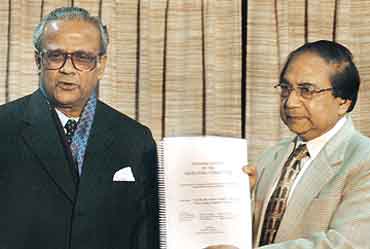 How do you react to allegations that you deliberately submitted the report on the eve of the Bihar elections so that Laloo Yadav could derive political mileage?
I am not a politician. I do not analyse events and circumstances on the basis of who will draw political mileage out of them. I am not concerned. The terms of reference of the committee clearly say that a report is to be submitted within three months. A request was made for an extension of the term which was granted. But since I was asked for a report by January 15, I submitted an interim report on January 17. I did what I'm expected to do. Nothing more, nothing less. I'm not bothered by what people say.

Why is it necessary for you to probe the Godhra train incident when there is a full-fledged commission of inquiry for the very same purpose?
The government (the railway ministry) had a statutory obligation to probe the Godhra incident within 48 hours of the fire in the Sabarmati Express. This probe should have been ordered within two days from February 27, 2002. But the Commissioner of Railway Safety deemed it fit not to conduct a separate inquiry on Godhra because an inquiry commission had already been set up. What is strange is that the inquiry commission was set up on March 6, 2002, almost eight days after the incident in Godhra. The Railways should have ordered an inquiry within two days, which they did not do. On February 27, when the Godhra accident happened, did the Railways know in advance that the inquiry commission was going to be set up on March 6? How can that be cited as a reason not to order a probe which is a statutory obligation?