The former CJI is worried that a solution to corruption seems nowhere in sight. 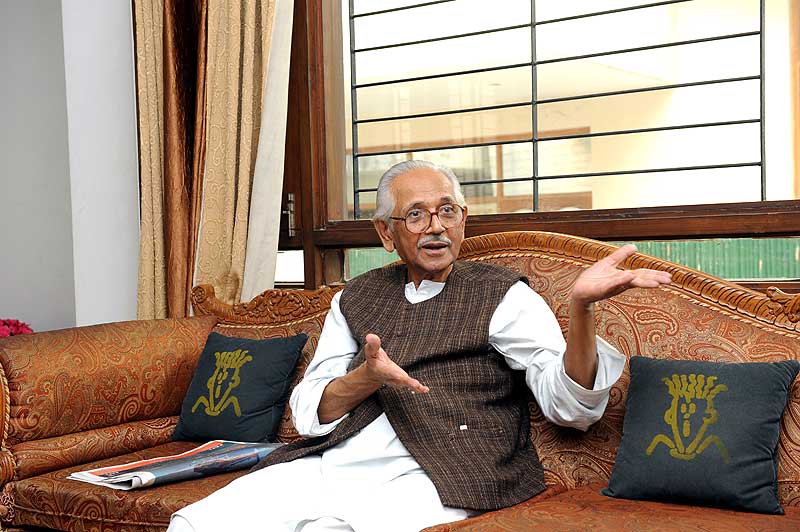 Jitender Gupta
Anuradha Raman November 12, 2012 00:00 IST ‘It Is Not Enough To Be Honest And Be Oblivious To Corruption’

Though he retired 15 years ago as Chief Justice of India, J.S. Verma continues to be a sought after man, perhaps because he spares none in his belief that those in authority should live by the standards expected of them. As the mood in the country turns cynical with fresh charges of corruption unravelling every day, Verma says he is worried that a solution is nowhere in sight. Excerpts from an interview with Anuradha Raman.

With your reputation as one of the most honest judges the higher judiciary has seen, why have you kept yourself out of the present movement, India Against Corruption?

I was requested by the Bhushans to join the movement much before Anna Hazare came to Delhi. I didn’t agree with their methods as, to my mind, movements should strengthen democratic institutions. I told them that if we knew the institutions that are corrupt, we should protest in front of them. Also, under Article 253, it is Parliament that can enact laws. It is with this belief that Justice Venkatachaliah and I shared our views on Lokpal before a parliamentary committee...and most of them appeared to agree with our view.

Your presence could have given the movement more heft.

I can be responsible only for my conduct. As I see it, those levelling charges are now facing charges themselves. Each passing day, fresh allegations are being traded by everyone. To be part of the movement, I would have to be responsible for everyone’s conduct which would have been difficult.

Doesn’t it worry you when institutions like the judiciary or the government face charges of corruption?

Katju appears to be a wild man... being appointed even as he demitted office as SC judge, it’s questionable.”

I am more harsh on the judiciary than the government as I feel those who judge have to impose exacting standards on themselves to be able to dispense their responsibilities. I am also conscious that I am alone in this as I feel, before speaking up, one must have the moral authority to do so. It is in this context that I said that there is a conspiracy of silence to suffer and tolerate corruption. When I was in the Supreme Court, even the registry was free of corruption. What I am saying is when one heads an organisation, besides being honest which is a prerequisite, one has to be an efficient administrator too. It is not enough to be honest and be oblivious to corruption.

Are you referring to the prime minister here?

Dr Manmohan Singh is honest and is known to be honest. But it is one thing for him to be honest, and another to tolerate corruption around him. The very least expected of an honest man is that he exert moral authority in dispensing responsibilities. If you can’t stand up, you must step down.

In the past you have spoken about corrupt judges in the SC. You also shared your views on a particular judge, Justice M.M. Punchhi, in your correspondence with then PM I.K. Gujral? The reference keeps coming up whenever there is talk of corruption in the judiciary.

I spoke only when I felt hurt by the former PM’s observations in his book that I had remained silent in the entire episode. My letter to him made it amply clear the views taken by the collegium and also demonstrated my willingness for any inquiry initiated by the executive in the matter. It was not in my hands to conduct an investigation. In the absence of any investigations, my views or those of others remain in the realm of allegations. In a similar manner, I was hurt by Justice A.M. Ahmadi’s comments in the Ayodhya case when the Bharatiya Janata Party asked for our view and he gave the impression that the bench was divided on communal lines. Nothing could be further from the truth. If that was the case, it is surprising Justice Ahmadi should still refer to my order whenever the topic crops up for discussion. Also, I have a strong position on those judges who take up arbitration matters after retirement. I head the self-regulating body on broadcasting and don’t take a single paisa for it. I was invited by Harvard immediately after retirement, I declined. I do not think judges should take up arbitration cases after retirement.

The media too now faces charges of corruption in the form of paid news.

After the Radia tapes disclosures, there are no holy cows anymore. But let’s not throw the baby out with the bathwater. Look at how even cub reporters reported responsibly on the 2010 Ayodhya verdict. This was also made possible because we came out with a code for media on how to report on sensitive matters. We’ll soon be joined by former cec S.Y. Quraishi at the News Broadcasting Standard Authority and we have other highly professional people too. Even the i&b ministry refers cases of violation of guidelines by the media to us for examination. Much of the corruption being highlighted now is through the media.

Press Council chairman Markandey Katju says there is no such thing as self-regulation and that there should be a media council to regulate press and TV?

Katju appears to be a wild man when he refers to organisations like the Medical Council or the Bar Council as examples of how things ought to be regulated. He should choose his examples with care. The Medical Council had a Ketan Desai as head. And the Bar Council has never initiated any action against its errant lawyers. Moreover, for Justice Katju to be immediately appointed even as he demitted office as Supreme Court judge, questions can be asked about the manner of appointment.