It Is All Or Nothing

To be effective, the Kelkar Report has to be implemented in toto. Will it be? 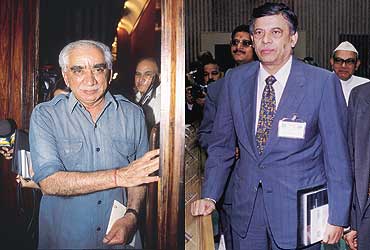 outlookindia.com
-0001-11-30T00:00:00+0553
Its lukewarm reception shows how snail-pace reforms have cooled off even the most sensation-hungry newsperson. But special advisor to the finance minister Vijay Laxman Kelkar's recent report on direct taxes has a lot of soul-stirring stuff similar to Raja Chelliah's report in the early '90s. Not the least of which are the two proposals to tax agricultural income in the states and exempting three-quarters of the middle-class assessees from income tax.

But that's exactly the problem. If accepted in toto, as preferred by Kelkar, the prescriptions may have major implications on government revenues as well as on the existing tax regime for corporates and individuals. Already, North Block is jittery about the possible impact of the report on the Indian psyche and a tussle has ensued between bureaucrats who favour the report and those who feel that the proposals cannot work. Finance minister Jaswant Singh has been caught in a Catch-22 situation, where he wants to be seen as pro-reforms but is restricted by stark financial realities.

No one doubts that the Kelkar report is in the right direction, albeit a little too ahead of time. As Mukesh Butani, national director, Ernst & Young India, points out, "The report identifies that the cost of collection has to be minimised for efficient fiscal administration. It recommends a simplification in the existing policy, replacing multiple exemptions and deductions with rational tax rates." But in India, something so good can never be politically palatable.

In fact, Kelkar's main proposal to remove exemptions and tax incentives has already been described as "anti-poor" by the CPI(M). And it could further alienate the BJP's main supporters, the middle class. His advice wouldn't gel with the FM's declared intention to put more money in the pockets of the common people. Even for corporates, a one-time withdrawal of exemptions would affect investment in long-term projects in infrastructure as well as corporate cost and profitability, impacting industrial recovery.

But Kelkar has a point. According to him, "The taxation system is now in the grip of an exemption raj like the economy was earlier under the licence raj, which leads to leakages, unaccountability and lack of transparency. The series of ad hoc exemptions and other tinkering has only served to clutter the culture of compliance." Butani too feels "the net cash take-home for small and medium taxpayers will not be adversely impacted" since the number of exemptions have already come down drastically.

Not too many people agree with them. Tax expert and NIPFP professor Amaresh Bagchi says scrapping exemptions on long-term savings is definitely retrograde and unfair. "This goes against the very idea behind exemptions for PF and similar instruments, especially PF, which was made a compulsory contribution so that the low-earners can save. You cannot tax their allocation towards future security."

Also, their removal has to be staggered to minimise the impact on the salaried class, he feels. Adds Gurinder Singh, CEO, Parasmoney: "Exemptions and incentives are used by tax administrations all over the world, especially in the corporate sector. Systems in the US or Australia are much more complicated, though asean nations have moved towards streamlining." But he feels Kelkar's proposals will work "only if the taxpayer has enough choices".

Critics are also unsure of the rationale for allowing those who earn up to Rs 1 lakh to go out of the tax net, as proposed. For, it goes against the government's decision to widen the tax ambit. In addition, the proposed tax rate of 20 per cent as the first slab is seen to be a bit too high. Many feel that a beginning could have been made at 15 per cent, with two more slabs of 20 and 30.

But Kelkar was more driven by the intention to simplify the income-tax regime. States the report: "Potential taxpayers at the lower end are frightened not by the entry rate, since the average tax continues to be low, but more by the compliance and enforcement procedures." In fact, though people earning up to Rs 1 lakh account for three-quarters of the returns filed, they ended up paying less than 20 per cent of the total personal income-tax in 1997-98, the latest year for which figures are available.

As for corporate tax, the effective tax rate on a sample 3,777 companies in 1999-2000 was 21.5 per cent as against the then statutory rate of 38.5 per cent. This remained stagnant at 21.9 per cent in 2000-01 even as the statutory rate rose to 39.55 per cent, says the report, quoting Comptroller and Auditor General findings. Clearly, there is enough evidence to suggest that corporates get away by paying lower taxes.

Still, scrapping the exemptions will rankle. For instance, the changes in depreciation norms for firms could mean a variation in rates by 30 to 40 per cent. And the tax liability could go up by 10 to 15 per cent in the initial years. Though this won't be permanent, it will affect cash flows of those who have invested in plant and equipment. To neutralise this, says Butani, the Minimum Alternate Tax should be abolished simultaneously.

Economists are also sceptical of the success of the proposal to tax farm income, though it's a welcome move. Past reports have concluded that at least Rs 1,000 crore of government revenues are lost in the cities due to the exemption on agricultural income. But, in 1972, when the Raj Committee made a similar suggestion, its implementation did not yield much. As Bagchi puts it, "We still don't know the revenue generated due to those proposals."

More important, are the proposals revenue-neutral, as believed by Kelkar himself? Not much, at an individual level. While the government's loss from the rise of the threshold limit and removal of standard deduction is estimated at Rs 13,000 crore, it could be a bit exaggerated. For one, over half the tax comes from the income bracket of Rs 1-4 lakh, which comes to Rs 17,000 crore, and only slightly less from above Rs 4 lakh. So, letting go of the smaller taxpayers will have minimal impact. If the exemptions are removed, the government will net more from the upper-income brackets.

In the corporate sector, though, the government is looking at a clear loss. Says Butani, "Across the economy, for most taxpaying firms, the cut in rates to 30 per cent implies a 14 per cent decrease in the burden." But, he adds, "phase-out of the exemptions/ deductions and alignment of the depreciation rates must be coupled with ways to cut litigation and compliance costs of taxpayers, which can then neutralise any adverse impact on profitability and tax costs".

Sums up Parasmoney's Singh: "There's no point in giving an exemption without a clear objective. By the same token, there is no use simplifying a tax system for the sake of convenience and populist notions." What is important is to veer towards a system that improves compliance but reduces tax burden. And somehow involve the people and other policy-makers in the process. Or else, even the good proposals can be rejected outright. In the case of Kelkar, the FM will be quite hard pressed to accept his recommendations after the BJP itself has decided to woo back the middle class.

A Mild Sparkle Of Hope