If not East Bengal, perhaps West Bengal? All I want is to be with people of my culture, to write in my language. 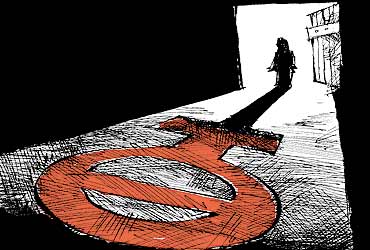 outlookindia.com
-0001-11-30T00:00:00+0553
What is my crime? My crime is that I have found that Islam does not consider woman a separate human being. Man is the original creation and womankind was created secondarily for the pleasure of man. Islam considers woman a slave, a sexual object and a son-producing machine. The Hadith says that two prayers that never reach the heavens are: those of escaping slaves and of women who frustrate their husbands at night.

Islam considers women psychologically inferior. In Islamic law, the testimony of two women is worth that of one man. In a case where a man suspects his wife of adultery or denies the legitimacy of the offspring, his testimony is worth that of four witnesses. A woman does not have the right to charge her husband likewise. Women cannot inherit property equally with their brothers.

And after all the rights and freedom, after getting all the sexual pleasure and pleasure of being the masters, men will be rewarded with wine, food, and 72 virgins in Paradise, including their wives on earth. And what is the reward for a pious woman? Nothing. Nothing but the same old husband, the same man who caused her suffering while they were on earth. It became clear to me that the male of the species had written the holy Quran for its own interest, its own comfort, its own fun. Then I studied other religions, and I found they, too, oppressed women. Far too many women are trafficked and sold into slavery. Men throw acid on their bodies, burn their faces, smash their noses, melt their eyes, and walk away with impunity. They are beaten, flogged, stoned to death. Women are raped, then accused of having allowed the rape, and the rapists are set free. Violence against women in not a crime in my country.

Nobody taught me to protest, but from an early age I learnt the importance of fighting against oppression. I wanted to write books so that I could change this. Wanting to do something constructive, I wrote about the need for women to understand why they are oppressed and why they should fight back. For centuries, women have been taught that they must not speak out against their abusers. Through my writings, I tried to encourage women to fight for their rights and freedom. My voice gave women the chance to think differently.

That did not please the religious fundamentalists, of course. They grew enraged when I said that religious law, which discriminates against women, needs to be replaced by a secular law with a uniform civil code. Before long, hundreds of thousands of extremists appeared on the streets and demanded my execution by hanging. A fatwa was issued against me, setting a price on my head. The government, instead of taking action against the fundamentalists, took action against me. I was charged with blasphemy. An arrest warrant was issued. I had to go into hiding, and later, in 1994, forced to leave my country. Since then, I have tried to go back home many times, but with no luck. Instead of being able to live where I was born and brought up, I had to go and live in western Europe, where I was condemned to a life term as an outsider. How to express that hopeless, helpless feeling: a stranger in my own country, and a stranger in the West.

My only hope now is West Bengal. I have never distinguished between the two Bengals. For me they are inseparable. My parents were born in undivided India, not I. But I did feel the pain of partition. Nearly a decade ago I wrote: "India wasn't a scrap of paper that it could be torn into pieces. The people who fought in 1971 wiped away the two-nation theory, proved that Muslim unity was a myth"; "we are extending our hands towards each other and between us stands the monster of religious boundaries". For this, I was called a traitor in Bangladesh. The torture of innocents inspired me to write my documentary novel Lajja. When I spoke about Hindus being oppressed, Muslims called me a plaything of Hindu fundamentalists. When I received a prestigious literary award in India, I became an outcast in the literary circle of Bangladesh. They called me an agent of raw. I didn't even know the meaning of raw then!

Since I started writing, I've faced lies and constant character assassination. Religion is the biggest obstacle in the path of freedom of women; but whenever I say this, I fall into the clutches of fundamentalists. They were angry with me from the beginning but gradually I found even moderate Muslims became my enemies. When I was forced to leave my country, I kept hoping the situation would improve someday and I'd finally go home. But I couldn't have been more wrong.

No matter which party came to power in the last 12 years, the government's agenda remained the same as far as my fate was concerned: I was barred from entering my own country. The political parties thought alike: if they allow me in, they would be labelled anti-religious and lose votes. Western Europe has given me asylum. That's given me some security, but it's not home. Repeatedly I tried to return to Bangladesh. Not being able to do so tore me to bits. Then I found the other Bengal. If not home to East Bengal, perhaps I could go to West Bengal, to Calcutta, a place that was almost home? But that wasn't easy either. India's doors stayed shut for me for six years, from 1994 to 1999.

The door finally opened—if you can deem it thus—in November '99. I was granted a tourist visa. Any tourist with a European passport can get a visa from an Indian embassy abroad. But my case was different. My appeal had to be sent to Delhi and a visa came with endless caveats. If I wanted a visa for three months, I got it for perhaps three days. After a few visits, I tried for anything that would let me stay here longer: citizenship, if not that, a residential permit.

Was I asking for too much? I am not taking anyone's job. All I want is to live a writer's life. As a writer I crave for my language, to live with people who share my culture—is that so unjustified? Western Europe saved my life; I can't help but hope India will save me as a writer. There are writers who can write in exile, living in a country where no one speaks her language or understands her culture. I can't. There are many who leave their own country willingly. I haven't.

As a writer, I need India for many reasons. In Europe and the US, I may find asylum but I will always stand apart as an outsider, either because of my colour or culture. Here in India, no matter which city or state I travel in, I don't ever feel like a foreigner, I merge easily into the crowd. I need that melting down in order to be able to write.

India is a vast country. From the beginning of history, innumerable people ended up in this cul de sac. Some have visited and then left, others have stayed, sending their roots firmly down. India has always warmly embraced every stranger, people of different colours, languages, religions, ethnicity and opinions. The door was ever open to an outsider. With hundreds of languages and cultures, India is unique in its generosity to the stranger. So why is there no place for me?

I've never asked for political asylum from India. All I want is to be able to live here. I might breathe in a distant land somewhere, but my heart is in Bengal. So why is my appeal to live here dealt with politically? Some argue that if India were to grant me citizenship, then her relationship with Bangladesh would worsen. As if I were a common criminal wanted back home that India is harbouring! Fact is, Bangladesh doesn't want me. So if India gives me a home, why should it concern Bangladesh at all? When I stay in Europe and America, does it worsen their relationship with Bangladesh? Instead, I imagine Bangladesh heaving a sigh of relief if India grants me shelter, like going to an aunt after fighting with your mother.

I can't help recalling those days when authors from the West joined together to save me. They not only put pressure on their own governments but also prevailed on the European Union to save a writer from oblivion. It was thanks to their efforts that governments in the West were compelled to save me from being hanged. Then followed a kind of tug-of-war between various countries. Norway, Sweden, Germany, everyone wanted me to live with them. Granting me residency or even citizenship was a prestige issue for them: it would ensure them fame.

I don't know who decides whether or not I stay in West Bengal. Some say the government wants to please the Muslims. Some say it's the intellectuals who're afraid, or jealous. Did West Bengal ever love me? Yes, she did. Annadasankar Roy, a famous free thinker, once said affectionately that "Bangladesh is Taslima's mother and West Bengal her aunt". When I talked of women's rights, I got a hard kick from Bangladesh and a kiss from West Bengal. Actually it's not the country which kicks or kisses, but the people. I have noticed that the number of secular and rational people here is far more than in Bangladesh.

And just as I love East Bengal, return again and again at its door even when I've been thrown out, just so do I love and return here to West Bengal.