It All Comes Under One Cap

The Sachar report on Muslims has set UPA on a solution hunt. What are the options? 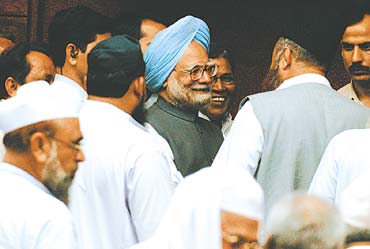 The ruckus over the 'religious census' in the armed forces thrust the Sachar panel into the public eye in a rancour-filled context. But its full report on the status of Muslims, chock-full with startling facts, has fired a genuine debate. In the air are many proposals, even a creative use of affirmative action. The facts—which the report will formally bring to light when it is presented later this month—are well-known: Muslims fare worse than even the SC/STs in education, and trail the OBCs in employment, economic status and landholdings. That they are represented well below their demographic share in government jobs and the lower judiciary. And, ironically, the only place where they are over-represented is in the country's prisons.

The UPA government is oath-bound to redress this. After all, its common minimum programme (CMP) had promised to look into "how best the welfare of socially and economically backward sections among religious and linguistic minorities...is enhanced". The Sachar committee's constitution was perhaps a first step—such a reorientation of policy had to be grounded in fresh socio-economic data. The panel's findings, PMO sources said, will now help "initiate a national debate on the subject...and hopefully move the discussion from talk of fundamentalism and terror to a focus on improving the socio-economic condition of the Muslim community".