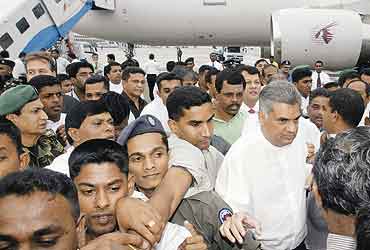 outlookindia.com
-0001-11-30T00:00:00+0553
It was a drama reminiscent of a banana republic: the prime minister is on a foreign tour, a general stages a coup, and its people continue to live in sullen silence. But the script of last week's political drama in Sri Lanka had some vital differences. It wasn't a general but the country's president, Chandrika Kumaratunga, who decided to precipitate a national crisis, sacking three senior cabinet ministers, proroguing Parliament and declaring a state of Emergency. And all this when Prime Minister Ranil Wickremesinghe was in Washington.

On November 7, though, three days after Kumaratunga's brinkmanship, people's power was on display in the capital, Colombo. More than 100,000 people thronged the airport to receive Wickremesinghe returning from his jaunt abroad. As people cheered him lustily, the PM promised, "Parliament will be resumed in order to get the peace process going." It didn't quite come to that as the president withdrew the Emergency on Friday morning averting a showdown.

Perhaps Kumaratunga hadn't envisaged such popular upsurge at the time she invoked national security to impose Emergency. The general secretary of Kumaratunga's People's Alliance, D.M. Jayaratne, cited the LTTE's counter-proposals of establishing an Interim Self Governing Authority for the Northeast (ISGA), and the government's refusal to dismantle new LTTE camps in Trincomalee, as factors endangering national security.

Most analysts here think Kumaratunga's gameplan was to divide the ruling United National Front (UNF), invite a faction to join her People's Alliance and appoint her advisor Lakshman Kadirgamar as prime minister. But this plan was promptly squashed as about 130 MPs pledged their support to Wickremesinghe. As Labour Minister Mahindra Samarasinghe put it: "The president has boxed herself into a corner."

What prompted Kumaratunga to precipitate the crisis? It is, some say, linked to the peace process. Wickremesinghe claims to have the popular mandate to negotiate a settlement with the LTTE; Kumaratunga feels the government has overlooked the LTTE's violation of the ceasefire agreement, and that the Constitution has vested in her the "plenary powers" to interfere in issues pertaining to national security. This conflict over the Constitution prompted her to move the Supreme Court, which ruled in her favour. According to this school of thought, Kumaratunga prorogued Parliament as she was apprehensive of Wickremesinghe impeaching her.

Underlying it is quite another story—of influencing provincial elections scheduled early next year. Currently, the UNF holds only the Central Province, and the PA the remaining six provinces. Control over these provinces, as well as over the police, the armed forces and the media, is considered vital for winning the presidential election in 2005, and the general election in 2006. Thus, Kumaratunga moved in now because finance minister K.N. Choksy was expected to present a poor man's budget on November 12, including a hefty salary hike for public servants and agriculture subsidies. Such a budget would have rendered it impossible for Kumaratunga to topple a government riding the crest of popularity.

Says an irate MP of the All Ceylon Tamil Congress, Gajendran Ponnambalam: "The PA could not have shaken the government for another 20 years and that is why Chandrika has done this." Her real intention becomes clear, points out finance minister Chosky, through her decision to sack the mass communication minister. "What role has the media played in disrupting national security?" he asks.

PA parliamentarian A.H.M. Fowzie, however, differs, saying national security has deteriorated because the government hasn't stopped the LTTE from harassing Muslims in the east. "This could lead to Muslims taking up arms," he warns.

With Sri Lanka witnessing peace over the last two years, and the economy booming, its citizens favour a resolution of the LTTE problem. Wickremesinghe may have people's power, but Kumaratunga has the backing of the Constitution. It isn't surprising why most want them to resolve their differences through talks.