Many strands of political Islam are deemed 'fundamentalist', no thanks to the Bush-Sharon axis 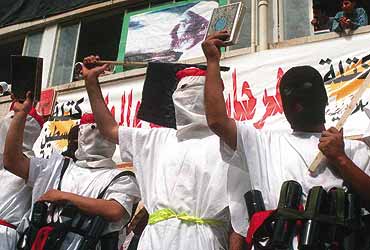 outlookindia.com
-0001-11-30T00:00:00+0553
In the aftermath of the September 11 attacks, President George W. Bush was careful to emphasise that America was waging a war against global terrorism, not against Islam. However, America’s pursuit and prosecution of its broad-based war against terrorism, and the rhetoric and policies of the administration that have accompanied it, reinforce the belief among many Muslims that the Bush administration is at war with the Islamic world. Several factors have contributed significantly to a widespread anti-Americanism that cuts across Muslim societies: the broadening of the US-led military campaign’s scope beyond Afghanistan; use of the term "axis of evil," with the threat of action against Iraq to remove Saddam Hussein; subsequent calls for the US to reconsider its policies towards long-standing allies like Egypt and Saudi Arabia; and, importantly, the continued "pro-Israel" policy of the Bush administration and Congress during the current Palestinian-Israeli conflict.

The lack of balance in rhetoric and policy, in words and in deeds, of the Bush administration has reinforced the perception among many Muslims of a Bush-Sharon, American-Israeli alliance. While the president and his officials held Yasser Arafat fully accountable for suicide bombings, they praised Sharon as a man of peace, quietly acquiescing to Sharon’s continued reliance on a massive and widespread use of force. Thus, US policy has transformed its war against global terrorism into a perceived war against Islam.

Domestically, the aggressive policies of attorney general John Ashcroft and government agencies in raids and arrests of Arabs, Muslims and Muslim organisations have often looked more indiscriminate than focused. The number of cases of detention without trial and the closure of Islamic organisations, without public evidence or timely trials and convictions, have raised significant questions about the erosion of civil liberties.

At the same time, the administration has failed to speak out against anti-Islam/Muslim statements by several prominent Christian Right ministers, including Franklin Graham (son of the prominent evangelist Billy Graham and the minister Bush selected to deliver the prayer at his presidential inauguration), Pat Robertson, Jerry Falwell and Jerry Vines, a number of whom are long-time Republicans and subscribe to a militant Christian-Zionist theology. This has raised serious concerns about the extent of their influence on the Bush administration. The latter, in fact, consists of members of the Christian Right in senior government positions, including Ashcroft and President Bush himself.

As the war against global terrorism unfolds in future years, the continued tendency of many to see Islam and events in the Muslim world through the prism of terrorism reinforces the tendency to equate Islamic fundamentalism and terrorism with all Islamic movements, failing to distinguish between non-violent and violent, democratic and anti-democratic. Like the Cold War, this perception of a monolithic threat enables governments in West Asia, Central Asia and elsewhere to crush any and all opposition, legitimate as well as illegitimate, labelling all as radical fundamentalists or terrorists.

While the West has had centuries to make its transition from monarchies and principalities to modern democratic states, a process that was marked by revolutions and civil wars, the Muslim world has struggled with several centuries of colonial rule followed by authoritarian regimes installed by European powers. If we ask why much of the Muslim world today is underdeveloped or unstable, we must remember that most modern Muslim states are only several decades old and that they were carved out by European powers. Arbitrary borders have fed ethnic, regional, and religious conflicts in Lebanon, Iraq, Nigeria, Pakistan, Kashmir and Indonesia.

In addition, Europe and later America forged close alliances with authoritarian regimes, tolerating or supporting their non-democratic ways in exchange for their allegiance during the Cold War or to ensure our access to oil. Not surprisingly, Muslim rulers have been plagued with issues of identity and legitimacy. The artificial nature of many modern states and the weak legitimacy of rulers have resulted in non-democratic governments. When useful, some rulers use religion to legitimise themselves and their policies. At other times, as during the aftermath of crises like the Gulf War of 1991 and September 11, 2001, they also use the threat of "Islamic extremism" to justify increased suppression or repression of any and all opposition to their undemocratic rule.

Judaism and Christianity in pre-modern times supported monarchies and feudal societies. Then, as a result of the Reformation and Enlightenment, debate and revolutions moved to accommodate modern forms of democracy. Today, in many parts of the Muslim world, many debate the relationship of Islam to democracy, call for greater political participation, the rule of law, government accountability, freedoms and human rights.

However, reactions to democratisation in the Muslim world remain divided. Some, from King Fahd of Saudi Arabia to ultra-conservatives and extremists, argue that Islam has its own mechanisms and institutions, which do not include democracy. Others believe that democracy can only fully be realised if Muslim societies restrict religion to private life. Still others contend that Islam is fully capable of accommodating and supporting democracy. Engaging in a process of reform, they argue the compatibility between Islam and democracy by reinterpreting and using traditional Islamic concepts like consultation between ruler and ruled, community consensus and the public interest to support parliamentary forms of government.

Muslims and governments in the Muslim world today face critical choices. If western powers need to rethink their policies, mainstream Muslims worldwide will need to more aggressively address the threat to Islam from religious extremists. Governments that rely upon authoritarian rule will have to open up their political systems. Societies that limit freedom of thought and expression produce a sense of alienation and powerlessness that often result in radicalisation and extremism.

A deadly global radical minority has wrought havoc, primarily on their own societies, from Algeria to the southern Philippines, and prey on the oppressed, alienated, and marginalised sectors of society, appealing to real as well as imagined injustices. Short-term military response to bring the terrorists to justice must also be accompanied by long-term policy that focuses on the core issues or causes that breed extremism—from authoritarian and corrupt governments to US policies in Palestine-Israel and the broader Muslim world.

The war against militant Islam presents formidable religious obstacles that must be overcome: the ultra-conservatism of many ulema; the more puritanical, militant, exclusivist brands of Islam; the curriculum and training in those madrassas and universities that perpetuate a "theology of hate", the beliefs of militants who reject not only non-Muslims but also other Muslims who don’t believe as they do. Indeed, as examples from America, Israel, Bosnia, Sri Lanka, the Muslim world, India and elsewhere have demonstrated, Christianity, Judaism, Hinduism and Buddhism also struggle with theologies of hate within their communities. The Muslim jehad (struggle) will be religious, intellectual, spiritual, and moral. But there must also be a more rapid and widespread programme of Islamic renewal that not only builds on past reformers but also follows the lead of enlightened religious leaders and intellectuals today who more forcefully and more effectively engage in a wide-ranging process of reinterpretation and reform.

The aftermath of September 11 challenges governments, policymakers, religious leaders, the media and the general public to all play both critical and constructive roles in the war against global terrorism. The process will have to be a joint partnership which emphasises the beliefs, values and interests that we share in common; that addresses more constructively our differences and grievances; and builds a future based upon the recognition that all face a common enemy, the threat of global terrorism, which can only be effectively contained and eliminated through a recognition of mutual interest and the use of multilateral alliances, strategies and action. The US cannot expect to simply set the course that others must follow.

(John L. Esposito is professor of religion and international affairs at Georgetown University and has edited The Oxford Encyclopedia of the Modern Islamic World, besides having written 25 books on Islam and politics.)