Jamaat-e-Islami is no longer anathema for the NC. Why are the Abdullahs wooing a faith-based outfit? 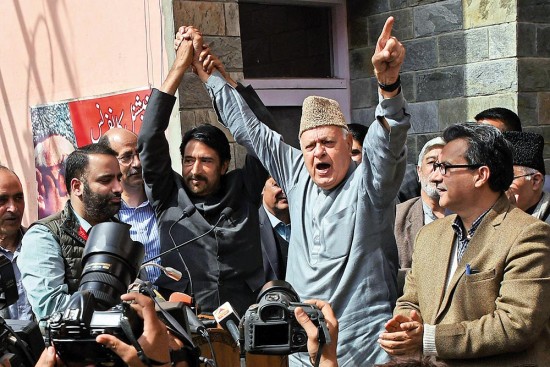 When a flamboyant and seasoned leader seeks vote from a conservative organisation, the political desperation seems obvious—however strong the denial comes. As two parliamentary byelections in his native Jammu and Kashmir draw close, senior politician Far­ooq Abdu­llah is increasingly invoking Islamic sentiments in a bid to woo the Jamaat-­e-Islami that his iconic father so fam­ously detested all his life.

Six months short of turning 81, this could well be Dr Abdullah’s last poll battle, observers believe. The former union minister, who headed the troubled border state five times, is contesting as the candidate of his National Conference party in native Srinagar that goes to polls on April 9. Three days later is a byelection in Anantnag, also in the Valley.

Dr Abdullah’s electoral opponent is far less known: Nazir Ahmad Khan of the Peoples Democratic Party (PDP) ruling the state. That has not stopped the NC veteran, whose party is in alliance with the Congress, from wooing the Jamaat in a way, commentators say, is bringing back a political recluse to the mainstream of society. More so, when the contestant’s father, late chief minister Sheikh Mohammad Abdullah who founded the NC in 1932, had been a harsh critic of the Islamist outfit that has today lost much of its public clout.

The Abdullahs—Dr Farooq and his ex-CM son Omar—have been calling this bypoll as an “ideological struggle”, raising the campaign pitch. In an April 3 speech, Dr Abdullah asked people not to forget a crusade of justice Prophet Moses waged against Pharaoh and his armies. “Truth, justice and honesty will always tide over suppression, brute force and tyranny,” he said with reference to the prophet-messenger in the Quran. This plea for support of “our brothers in the Jamaat” was made before...