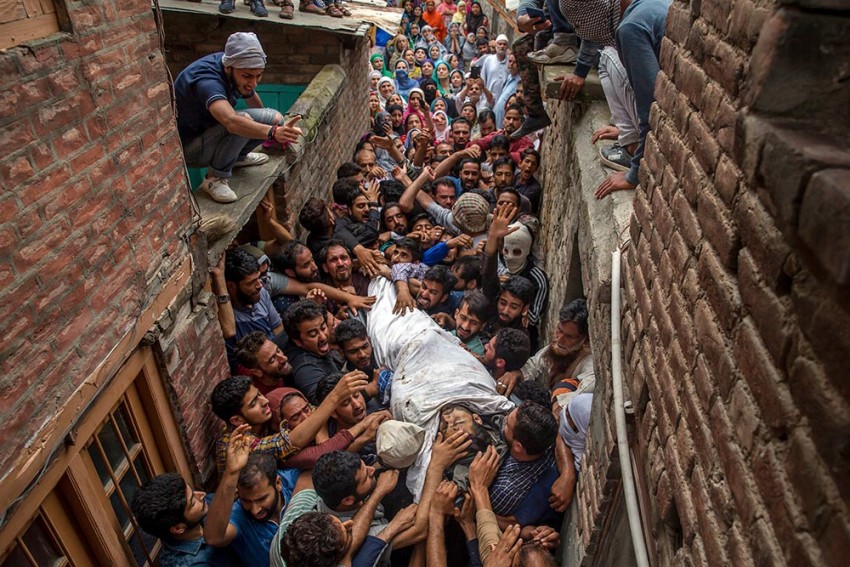 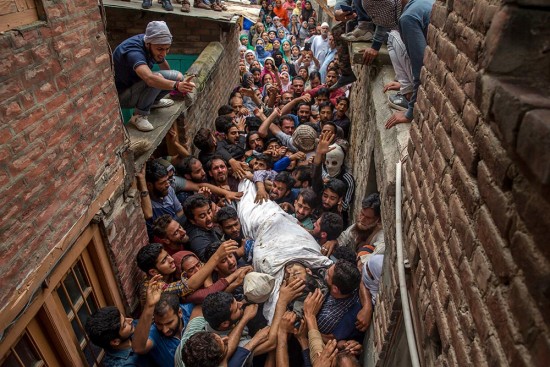 Soon after Sajad Ahmed Gil­kar’s body was brought to his home in downtown Srinagar on July 12, youths who led the fun­eral procession of the young militant did something unprecedented in the history of Kashmir’s insurge­ncy: they waved black flags. The colour, representative of the Isl­amic State terror group, has brought to the fore new ideological faultlines in the restive Valley, where Pakistan’s national flag is a usual sight on such occasions of loud protest.

At Nowhatta, men demonstrating support to 26-year-old Sajad and his separatist ideology also shouted slogans hailing Hizbul Mujahideen militant Zakir Musa. Exactly a month before it, 23-year-old Musa had proclaimed that Kashmir struggle was all about Shariat and shahadat (martyrdom). What’s more, the Pakistani flag, he proclaimed, doesn’t fall within the “pure realm” of the Quran-prescribed Islamic guidelines “because there is no Kalimah (declaration) insc­ribed on it”. The militant conglomerate of United Jihad Council distanced itself from the statement, prompting Musa to announce his departure from the 1989-founded Hizb.

Kaw Mohalla witnessed loud protests ahead of the last rites of its son Sajad, who sec­urity personnel had killed along with two other militants the previous evening at a hamlet in Budgam district of central Kashmir. That encounter at Red­bug was on specific information about the presence of certain ultras, according to the police. Five days later, ano­ther funeral of a militant in Pulwama district was mar­ked by waving of the same black flags. The body of Jaish-e-Mohammed’s Mukhtar Lone was shrouded in ISIS flag at the procession in Amurabad, inclining obse­rvers to suspect whether there is a new worry taking over the Valley since the burst of insurgency in 1990.

Some analysts tend to look at it from a different angle, saying the vanishing of Pakistani flags at such funerals could imply a message of disenchantment with the establishment in Islamabad. Writing paeans about this on social networking sites, they note Nowhatta has been the first case of people throwing away Paki­stani flag at the funeral of a militant, INS­tead holding black ones. “This happened in Old City, which has always remained pro-Pakistan (since 1947),” notes an obs­erver. “Black flags inscribed with Kali­mah don’t necessarily mean it is the ISIS, but a signal to Pakistan that it hasn’t done enough for Kashmir. And, yes, that other forces can replace it in Kashmir.” Ano­ther category of observers chose to des­cribe the waving of black flags as a sign of an “ideological shift”.

The police believe the black flags will fizzle out soon. “Kash­mir has never acce­pted this kind of an ideology and Kashmir will never accept it”, says Inspector General Munir Ahmad Khan, deri­ving optimism from rec­ent protests that rocked Kashmir after the lynching of deputy supe­rint­endent Ayub Pandith. “Everyone condemned it. People spoke without fear of reprisal. It gives a lot of hope.”

Analysts feel that black flags are a message to Islamabad for ‘not doing much’ for those seeking independence.

As for the July 11 Redbug encounter, Budgam Superintendent of Police Tej­inder Singh says it started after security personnel launched a cordon-and-search operation following a definite tip-off about militants in a house. “They started firing at us. We halted the operation for the night. The gunfight resumed in the morning. The trio was killed,” Singh tells Outlook. The government forces had made an announcement for surrender, but the militants, with one rifle and two pistols, didn’t accept it, he adds. Besides Sajad, the deceased were Hizbul district commander Javed Sheikh and Moha­mmad Aquib Gul, 22, also of the Hizb. Aquib was from posh Sanatnagar, having no history of throwing stones at forces on the streets­—he was an engineering student who left home on June 27. Sajad, with a decade’s record of stone-­throwing, had left home on June 29.

The intervening night of July 11 and 12 has left a deep scar in the minds of Redbug villagers, who had to flee their homes ahead of the encounter. Middle-aged Mohammad Ramzan Mir is among them, having his house reduced to burnt walls that now bear writings mirroring the fury of a young generation. After the she­lling and firing, only the walls of the brick house stand intact—the fire on the night burnt down everything, including the copper utensils in the kitchen.

Ramzan, 55, says he came to learn that three boys had entered his house and that the police and the army had cordo­ned off the picturesque village. “I was cutting wood along with other labourers,” he says pointing towards tree trunks on the ground in vast open field having walnut, poplar and willow trees outside his house, now an ashen frame. On the walls of the burnt house, youngsters have INS­cribed ‘Pakistan Zindabad’, ‘Hizbul Mujahideen’ and ‘Burhan Wani’ (the Hizb militant killed in an encounter a year ago). “I have nothing to do with the writings,” says Ram­zan, who has six daughters—all unmarried. “These youngsters came in large numbers and wrote whatever they wanted. How can I stop them?”

None in Redbug claims having seen militants ent­ering the village or their bodies after the encounter. “We are not like south Kashmir. It’s very peaceful here,” says Ramzan. “When a cordon was laid around the village, we followed the forces’ instruction and moved out. We came back the next day by when there was no firing. What happened in between…we don’t know.” A village boy says the bodies of three militants were lying on the mosque ground—not in Ramzan’s house. “I saw it on the internet. The bodies were lying close to a cart. That place is close to Ramzan’s house, across the brook,” he adds.

Ramzan and other villagers totalling around 520 say they had been living a good life and would never participate in protests. “Yes, there were few militants in our area, but that was in the early 1990s,” says the headman of the village, where July-August is lean season when its men work as labourers, taking a break from mainstay as shawl weavers and artisans. “We have never participated in any protest in recent past.”

On the critical evening of July 11, mason Nazir Ahmed Gilkar got a call from an unknown number when he was in Pampore town, 15 km south of Sri­nagar. On the other side was his son, Sajad. “It was 7.48 pm. He told me that an encounter is about to start—and sought my forgiveness. He told me he made us suffer for long,” he recalls. “Then Sajad said he wanted to talk to his mother. I said I am not at home. He said ‘please ask mother to forgive me’.” That was the first and last time Nazir heard his son’s voice after the youngster disappeared on June 29. The night over, he was to see Sajad’s body.

That day, Sajad’s two uncles rushed to Budgam to get his body. Manzoor Ahmad and Imtiyaz Ahmad say the police forced them to visit one police station after ano­ther, denying the body for long. Finally when they got it, a senior police officer asked Nazir about the route the funeral was to take. Soon, a curfew was imposed in the Old City. “Police didn’t allow us to have his funeral prayers at Jamia Mos­que,” says the father.

Even as new hardliners are keen to describe Sajad as a militant by conviction, his family believes continuous torture by the police forced him to join militancy. “Had we known he will join militancy, we would have done anything to stop him,” says Nazir. Chimes in Imtiaz: “All we know is that some unkn­own people took over the body of our son, shouted slogans and brought the flag. We presumed it as an Islamic flag. That is it.” Today, the household is concerned that the police have smeared their son’s name by linking him with the July 22 lynching of DySP Pandith. 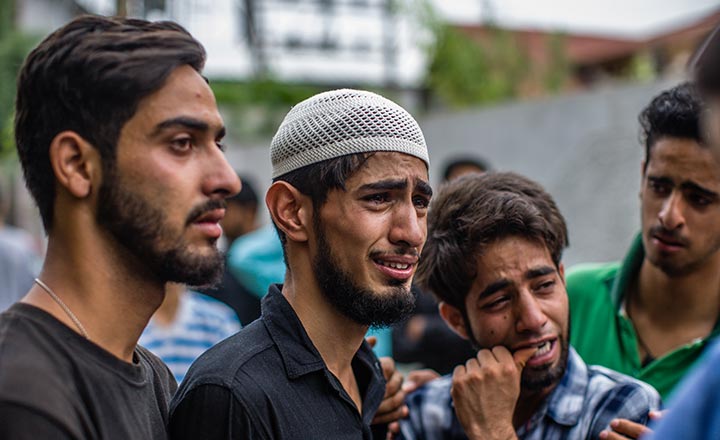 The police did come up with a statement to that effect on the day of the Redbug encounter. Sajad played key role in the DySP’s murder—and went underground after the incident to join the Hizb, a police spokesman had said. “He was also involved in grenade attacks on CRPF at Now­hatta this April 2, on a CRPF camp SafaKadal on June 11, and a grenade attack on a pol­ice party at Khanyar on April 30,” he said, claiming Sajad’s involvement in att­acks on Abdul Qayoom in Barzulla on May 24 and an army convoy near SKIMS Medical Col­lege, Bemina on April 1.

Since 2008, Sajad has been in and out of the police station. “Last year,” recalls Manzoor, “when he was not at home, the police dragged his father from the byla­nes of this mohalla then bundled him into a gypsy.” Sajad, according to his lawyer Mir Urfi, was last booked under the Public Safety Act (PSA) in July last year and was released this January. Since then, he was regularly coming to the court for the hearing of cases against him. He was booked under the PSA three times since 2008. The family says Sajad, after coming out of the jail, had become silent and rarely went out. “We don’t deny he was stone thrower, but the police should spare us from the torture of involving him with the lynching,” says the father.

The lawyer is also puzzled. Urfi says Sajad’s name doesn’t figure among the accused in the June 22 FIR June 22 at Nowhatta police station in the case on the lynching of the DySP. “There are four cases registered against Sajad. He was regularly coming for the hearings. He was present on June 29 as well for a hearing,” she says.

The police say Sajad had, along with Aquib and Javed, disappeared after the Pandith lynching. “He was not present in the court on his hearing date; otherwise we would have arrested him,” says Inspector General Munir Ahmad Khan, known for his counter-insurge­ncy operations and aptitude. Many in Srinagar feel the killing of Sajad and Aquib has the potential to drive boys towards militancy as is the case in south Kashmir, But Khan doesn’t agree. “Neither militancy nor protests supporting it will rem­ain for long—be it in Srinagar or South Kashmir,” he says.

For past two decades, Srinagar has rem­ained the hub of separatist protests; but the state capital hasn’t seen militancy from its youngsters, who throw stones but seldom pick arms. The last militant from Srinagar to have been killed was Sajad Ahmad Khan—in Rajouri district of Jammu in 2010. He was from Firdous Abad in Batamaloo of the state  capital. Intelligence sources say only eight youths from Srinagar have joined militancy. That is a figure officials dismiss as negligible.

By Naseer Ganai in Budgam and Srinagar

Then A Mundhra, Now A Mallya