When Cupid lurks in every tehsil and every taluka, St Valentine is not so "foreign" after all. 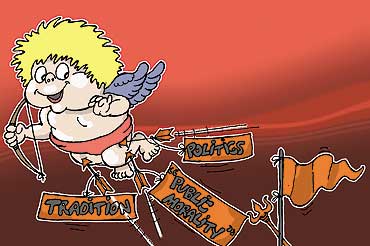 outlookindia.com
-0001-11-30T00:00:00+0553
Will love conquer the RSS? Romantic love has always been the dangerous enemy of traditional societies, especially ours. When 15-year-old Vishal, a Brahmin, fell in love with 16-year-old Sonu, a Jat, their parents killed them for violating the social order. As the Manusmriti thunders: "A Brahmin who takes a Sudra wife to his bed will (after death) sink into hell." But love knows no caste nor creed. Love upsets the social status quo. No wonder Bal Thackeray and his Sainiks say love is a "foreign concept" and hate Valentine’s Day and Valentine’s Day cards. No wonder youths belonging to the abvp take out marches against the "love culture".

Love might infuse some destabilising democracy into a feudal and fossilised society. When the poet Baz Bahadur fell in love with his Hindu queen Rani Roopmati, he wasn’t thinking of the dictates of his religion.

Love transcends politics and leads a pracharak and a sanyasin into the jaws of media gossip and public scandal when there should be no reason for either. Why should Uma Bharati and Govindacharya or for that matter anyone else apologise? Why should they bow and cringe to the geriatric Powers That Be and balk at the mention of the word "love"? Because they stand to lose their so-called public morality. They could lose their usp. They could lose the sanction of tradition and the blessings of the parivar. They could lose their popular legitimacy, their "sacred" leadership status, even their political careers.

King Dushyant fell in love with Shakuntala even though she was a poor hermit’s daughter. In Silappadikaram, Kannagi loved Kovalan even though he betrayed her. When Cupid lurks in every tehsil and every taluka, St Valentine is not so "foreign" after all.

In Kusht Basti, an economics grad becomes the Second Coming