Is Oesophagus The Pharynx?

The Class 12 biology textbook thinks so. Errors like this are aplenty in the 238 NCERT textbooks reviewed. 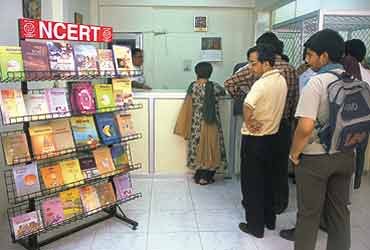 outlookindia.com
-0001-11-30T00:00:00+0553
The aftershocks of the changes the NDA government introduced in children's education just refuses to subside. As academics dig deeper in the rubble left behind, it turns out that history textbooks were not the only ones subjected to inaccuracies. Books on other subjects—ranging from biology to mathematics and geography—are riddled with so many errors that no permanent solution is in sight for the next two years. In effect, children from classes 1 to 12 are forced to study textbooks that the National Council for Educational Research and Training (NCERT) itself believes are poor in content and factually incorrect.

The NCERT realised the extent of the problem after a group of experts drawn from the Jawaharlal Nehru University (JNU), Jamia Millia Islamia, Delhi University and NCERT's in-house academics reviewed about 238 textbooks of all subjects other than history. A separate committee had already reviewed the much-talked-about history textbooks and found them unsuitable for distribution to students. These books would be withdrawn from the next academic session in schools. But the factual errors, problems of language and conceptualisation in the other textbooks open up yet another front for the council.

Here is a sample of what Class XI students are currently studying in their biology textbook:


Besides the factual errors and spelling mistakes, many irrelevant topics have been introduced in the Class 12 Introductory Microeconomics textbook. Dr Girish Mishra in his review of the textbook mentions some of these :


Dr Mishra questions the inclusion of statements which he feels are of "doubtful nature". This is what a "doubtful" statement reads like: "The problem of unemployment is largely due to our huge population size. A more careful thinking says that, sometimes a part of the problem is contributed by the presence of trade unions".

Now, this is something the upa's cm may not have. No wonder the experts expressed their dismay in a short note. "During the review, the members found some books that were so faulty in terms of content and perception that they wanted to recommend their discontinuation forthwith since improvement through corrections was not possible," said Prof Karuna Chanana, chairperson of the group of 23 experts in the note to NCERT. However, the council cannot discontinue the textbooks despite such bloomers. The reason: NCERT has a stock of these books which is worth Rs 51 crore. "The stock has to be exhausted. It is not a happy situation at all," says Prof Krishna Kumar who has recently taken over as the director of NCERT.

So, for now, the errors found by the experts would be compiled. They will be circulated in the form of errata along with the books to the students next year. It is still not clear how a student of Class V, in whose mathematics textbook experts have found mistakes in 204 out 268 pages, will be able to deal with the magnitude of the problem. However, there will be new editions of four English textbooks for classes 11 and 12, a Hindi book for Class 7 and two sociology textbooks for Class 11 and 12.

These errors have confused students as they defy all logic. For example, if a numerator is put where the denominator is in maths for Class 5, then the student may find it impossible to solve the sum. Similarly, in biology it does not help if parts of the digestive system make their way into a description of the circulation system.

One view is that the Rs 51 crore that have gone into making the books should not be the reason for "such trash" to be unleashed on children. "Why should the children suffer because the NCERT has managed to collect a stock of books?" asks Prof Arjun Dev, former head of the social sciences department in NCERT. Prof Kumar agrees that the council had no business piling up so many books. He explains why it happened: "The NCERT was not constituted as a printer and publisher of textbooks. It is a body for educational research and training. But over the years, instead of capacity-building for such educational activities in other states, the council has taken it upon itself to print books and sell it to other states."

For the time being, Kumar is concentrating on evolving a national curriculum framework with the eventual goal of establishing a National System of Education. Well-known NGOs and leading scholars from various disciplines are part of this exercise. "The first implications of these developments will hopefully be visible by the beginning of 2006," says Prof Kumar.

For the time being, the policies of the previous regime continue to haunt children in the form of badly brought out, error-ridden textbooks.