'Is It For Another Riot?'

Muslims view Tehelka's sting with suspicion, they'd rather get on with their life 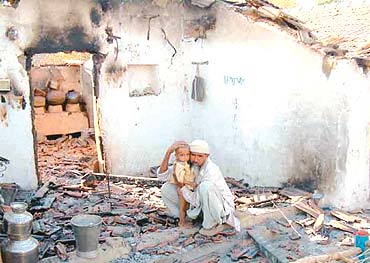 outlookindia.com
-0001-11-30T00:00:00+0553
Given the heightened communal realities of Gujarat, the Tehelka sting has not had the effect people outside the state may have imagined. For one, as political commentator Achyut Yagnik puts it, "There is no question of shame in Gujarat." He laughs as he goes on to add, "We Gujaratis have no remorse. We'll say, why are outsiders condemning us? Is it because you are jealous of our development? Face it, this state is very anti-Muslim at a deep level." Activist Gagan Sethi too is quite blunt when he says: "Naming and shaming does not work inside Gujarat. It works outside. That is why many people have asked here whether Modi himself got the operation done."

But it is the people who suffered the most, the Muslims, who remain highly suspicious of any attempt to retell the events of 2002. Most of them just want to get on with their lives, now in resettlement colonies. In the Narul resettlement colony of Ahmedabad, one has to walk across open sewers and kuccha roads to meet people who live without drainage facilities. Comprising largely of former residents of the now infamous Naroda Patiya area, people do not want to give their names till they have checked the visitor out. But Mohammad Yusuf, who works with tiles and chips, did respond to the Tehelka sting, saying, "I watched the programme and wondered why they were showing this before Diwali. They must be planning another riot before the elections." Iqbal, a small contractor, said the same thing: "We know this happened. I ask why are you taking pleasure in our pain before the elections."

Shabnam, a young girl who spent months in camps but now works as an activist, says she cried when she watched individuals bragging about killing and raping Muslims. "Then I thought that they must be so happy to see this again. They feel they were great men to kill us. That is why I was disturbed and unhappy." Still, there are some Muslims who do hope that the material has some legal purpose. Yusuf Shaikh, a Baroda resident, says: "It is pointless to show all of this unless we can nail those people. Now the tapes must be used to prove a conspiracy to mass murder."

Muslims in Gujarat live in the face of so much prejudice and ostracism that they do not respond with the natural outrage expected of people. They just want to get on with their lives, with their heads down. They want to make sure no one comes to kill them again. Given the twisted reality of many Hindus condoning the marginalisation of Muslims (besides the ones who actually raped, killed and burnt), the response of Gujarat's Muslims is to see motive and evil intent behind what appeared a perfectly innocent attempt to recall the horror. They don't want that.

And God Save The Messiah

It's Only Symptomatic People Who Spreads COVID