Is It Baba Black Sheep Once Again? 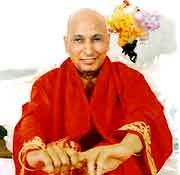 Yet another super godman has been discovered in the political constellation of the capital. Known as Jalandharwale Baba, he’s currently said to be the most influential godman in Delhi—a veritable Chandraswami part II. Guruji has an impressive list of followers, including Union cabinet ministers, senior cops and bureaucrats, former judges, industrialists and sundry politicians.

L.K. Advani and family, Arun Shourie, Uma Bharati, Rajnath Singh and Maneka Gandhi, industrialists R.K. Khemka and S.K. Birla, and top cops Kiran Bedi and K.K. Paul have all been spotted at Guruji’s palatial kothi, at Empire Estate near Mehrauli, reportedly donated by nri Sudha Ahuja, a die-hard follower. Advani’s private secretary Deepak Chopra plus family too drop by. Ex-PMs H.D. Deve Gowda and Chandra Shekhar are said to have been introduced to him by the latter’s political advisor H.N. Sharma.

Mayawati’s private secretary is a frequent visitor. The buzz is that Guruji had promised her the CM’s job in UP. Congress MP Rama Pilot and Delhi MLA Kiran Choudhary hover around the ‘ashram’. Also seen are controversial UP bureaucrat Neera Yadav and a sprinkling of eminent Delhi babus.

The clean-shaven (and tonsured) Guruji is gorgeously attired in embroidered silk, bright satin and brocade, studded with gems on special occasions. He attends few functions, sometimes appearing in high-powered weddings. During darshan, he sits on a chair, while his followers sit on the floor, including the high and mighty. A favoured pair is allowed to hold on to his feet.

Guruji is a man of few words. He often communicates through gestures, dismissing some devotees with a flick of his hand, while summoning others with a snap of his fingers. Not much is known about his antecedents, but he’s believed to be from Malerkotla, Punjab, where he was reportedly known as Nirmal Singh. But these days, Jalandharwale Baba is clearly the latest godman incarnate for the mandarins of power.