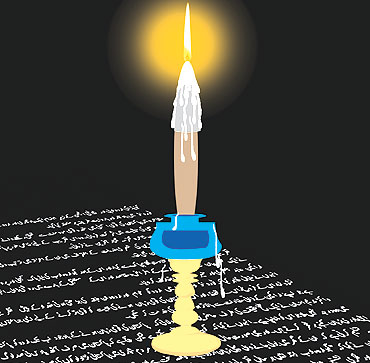 outlookindia.com
-0001-11-30T00:00:00+0553
If creative persons have a deep need for appreciation, then nothing facilitates it better than a mushaira—a gathering of poets face to face with a live audience, reciting their latest compositions and getting immediate response. Koi mere dil se poocche tere teer-e-neemkash ko/ Yeh khalish kahan se hoti, jo jigar ke paar hota (Someone ask my heart about your half-slung arrow; would it have festered so had it pierced right through?) The shama placed in front of him, Mirza Asadullah Ghalib would have first read this couplet at a mushaira in the first half of 19th century. For many gathered there, the words would have pierced right through. And they would have made it their own and quoted it profusely.

Mushaira is a living tradition, perhaps even older than the Urdu language in the subcontinent. It's a tradition that came to India in the 1600s, from the Arab world and via Iran, at a time when speakers of Arabic, Farsi and Turkish came to a subcontinent that already had a vibrant and varied tradition of verse. In those days, when the written word was accessible to but a few, when there was no mass media or television, it was in gatherings like this that ideas and poetry were disseminated.

When Urdu commenced its great literary journey, it travelled all over the subcontinent. In the beginning, Urdu poetry was written in metres native to Farsi poetry. Poets would be given a certain metre for their compositions, which were to be recited at what were called tarahi mushairas. At other times, smaller nashists, which in today's language would be drawing-room gatherings, would be organised for poetry on either a single mauzoo (theme) or tarah (metre).

The early mushairas would have centred on ghazals, or sets of well-rhymed, well-metred couplets in which each couplet would be complete in itself in both thought and substance. It was only towards the latter part of the 19th century that the nazm, which is like the English poem and weaves itself around a single thought, was accepted in a mushaira. And even later, with the Progressive Writers Movement, that the azad nazm or free verse made an entry into the world of Urdu poetry and that of the mushaira.

Interestingly, there was another world of poetry in the zenana, which probably started from Lucknow. Women had their own small nashist in purdah, at which women poets would recite to each other. Begum Hazrat Mahal, Nawab Wajid Ali Shah's wife, was a poetess who would hold regular nashists in the royal harem. Way before women started participating in public mushairas in the 1950s, men dressed as women would recite poetry with feminine sensibilities. It has been recorded that during British times, a burly poet named Pehelwan would dress up like a woman and read his poetry by the name of Nazneen.

The tradition of mushaira reached its peak during the time of the last Mughal emperor, Bahadur Shah Zafar, in the first half of 19th century. The Red Fort of Delhi was the venue of numerous mushairas, at which many leading Urdu poets of the time—Ghalib, Dagh, Tufta, Zauk, Momin and the emperor himself—would take turns at reciting their compositions.

During the struggle for freedom, mushairas became a platform for inquilabi poetry. The 20th century saw the flowering of progressive writers as well as ustad shayars like Allama Iqbal. Humour and satire was always an essential component of a mushaira and remains so to this day.

Post-independence, the mushaira—public yet intimate—encountered the mass media. While the Red Fort revived its historic links on behalf of the modern Indian state—hosting poets from all over the country on Republic Day—radio and television became the new vehicles for taking the legacy of the mushaira to people across the country. And over the years, many private organisations have stepped in to provide a new platform for this symbol of our syncretic culture.

The Jashn-e-Bahar Trust has organised aalami mushairas for the past ten years. It brings together Urdu poets from all over the world, to present the latest in contemporary thought to thousands of lovers of Urdu poetry. At its recently concluded session, it attracted Urdu poets from places as diverse as China, the US, England, Afghanistan, Saudi Arabia, Pakistan, as well as all parts of India. At this gathering, Chinese poet Zhang Shi Xuan recited an eloquent tribute to the power of Urdu poetry: Toot jata hai qalam, harf magar rahta hai/ Paon chaltey magar, naqsh thhahar jata hai (The pen breaks but the letters remain, the feet move on but the imprint remains.)

(The writer is the founder of the Jashn-e-Bahar Trust.)