Home  »  Magazine  »  Arts & Entertainment  » EXCLUSIVE documentary: The world before Her »  Irony And Steel

Inside the Durga Vahini and its complexed take on femininity 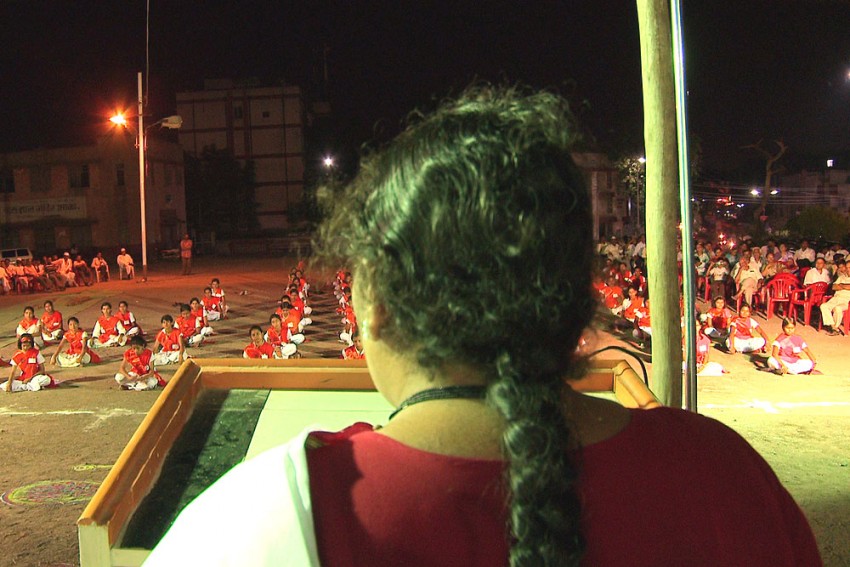 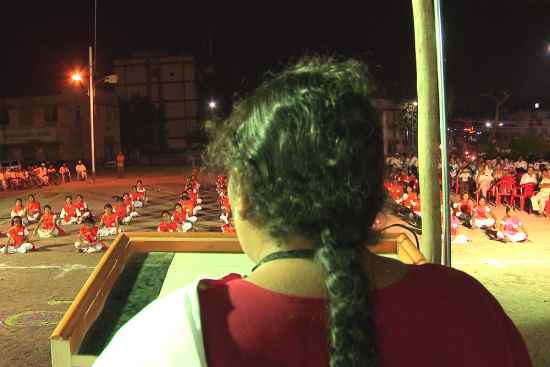 There’s a chilling scene  in Canadian filmmaker Nisha Pahuja’s documentary The World Before Her. Prachi Trivedi, a brawny, bushy-browed counseller with Durga Vahini, the women’s wing of the hardline Vishwa Hindu Parishad (VHP), talks about being beaten with a hot iron rod by her father. There is a fiery rebellion in her eyes, yet, eerily, a gratefulness. “Knowing I’m a girl child, he let me live,” she says. “In a traditional family, people don’t let a girl child live....” Juxtaposed against her story is that of Pooja Chopra, winner of the 2009 Miss India pageant. Pooja’s mother left her father when he said he didn’t want another daughter. Pahuja’s film alternates between polar opposites: the ‘aspirational’ world of beauty pagea­nts and that of the Durga Vahini. Two dubious means of empowering women.

The 2012 documentary, finally releasing in India this week, focuses on two young women taking part in two very different training camps—Prachi at the Durga Vahini’s camp, and Jaipur girl Ruhi Singh in a run-up to the Miss India contest. What makes the film arresting is the rare peep it offers into the Durga Vahini, established in 1991 by Sadhvi Rithambhara. It’s the first time a Durga Vahini camp has been filmed, and it took Pahuja close to two years to convince the VHP. Says Pahuja, “On the first day, someone objected, but relented with restrictions. We weren’t allowed to film certain sessions.” 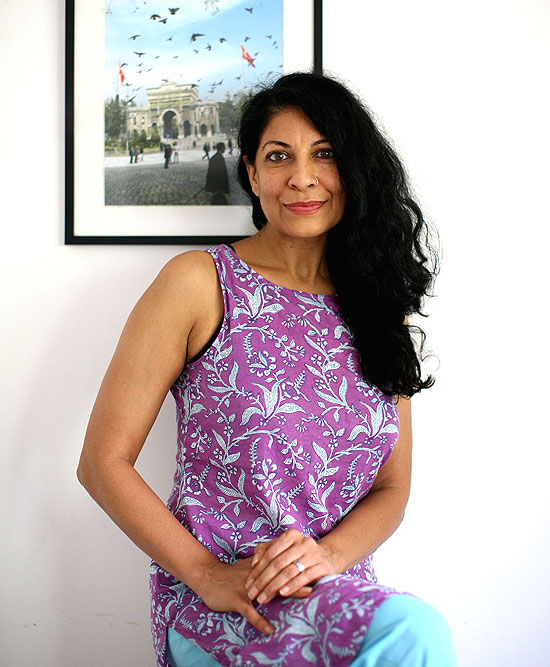 This rare footage is the soul of the film. Teenaged girls being made “spi­ritually and physically saksham (capable)” to fight threats to their culture; learning martial arts and shooting to safeguard ‘Hindu values’—while being told of the essential “weakness” of women. Some complex characters open up fascinatingly. For example, Prachi doesn’t want to marry, but her father believes she must for religious reasons. The way she argues with him shows even the most indoctrinated are capable of raising questions and thinking through issues. Prachi now lives away from her family and works in a legal firm but still believes in the Durga Vahini’s tenets. Contrasts like this make Pahuja’s film fascinating. “But it’s not contradictory for Prachi,” says Pahuja. “The dualities coexist in her. She’s comfortable with them.”

Following are excerpts from the screenplay, focusing on the Durga Vahini  portion, a glimpse into the brainwashing and mass hypnosis young women undergo at its camps. 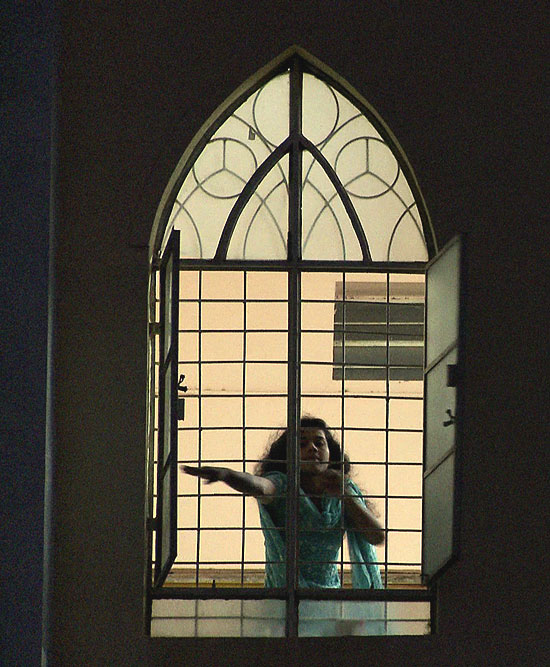 Exterior. Building. The lights turn on. A woman opens a window.

Super: Over the past 20 years, Hindu nationalism has become a pervasive cultural and political force in India.

Super: This is the first time a film crew has been allowed in a camp.

A woman speaks to the girls.

Durga Vahini chief Malaben Rawal (in Hindi): Your transformation into tigers begins here. Spiritual and physical awakening. We’ll awaken your strengths. Every day you will undergo physical training for a couple of hours. When you train for two and a half hours in the heat, you’ll believe in yourself. If you face an attack, you should be strong enough to defend yourself. There is a saying: “Those who can defend themselves can defend the nation.”

Durga Vahini camp—Prachi instructs the girls at the  camp.

Prachi Trivedi (in Hindi): Hurry up, I’m not going to repeat myself. Move this way. You, move back. When I tell you to move back, it means to get in line with me. Move forward. 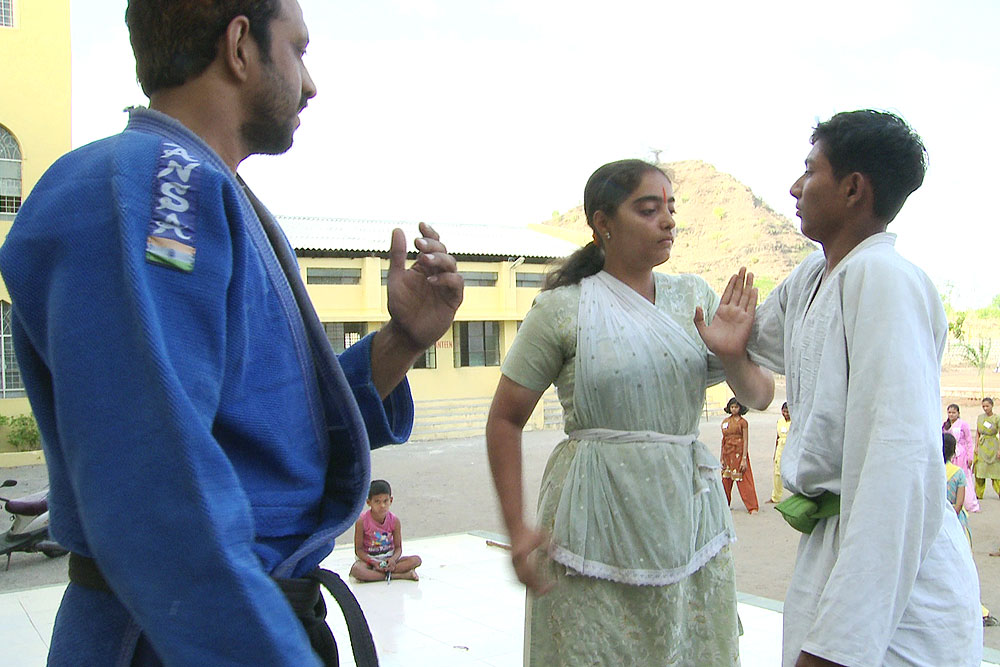 Prachi (Hindi): I don’t like girlish type girls. Speaking all nonsense. Even if she’s not physically strong, she should be mentally mature. And there are some girls here I feel like slapping them...banging them out from here, but this is not my camp, so I don’t have the authority.

Prachi (Hindi): Quarter turn right. You should be facing this way.... Why are you looking behind? Look ahead.

Yogita (Hindi): They live at home, they’re not used to discipline. So you have to shout and get angry. Nobody can say, “I’m not in the mood so I won’t do it.” You have to do it. If every person is disciplined, then society will become disciplined as well. 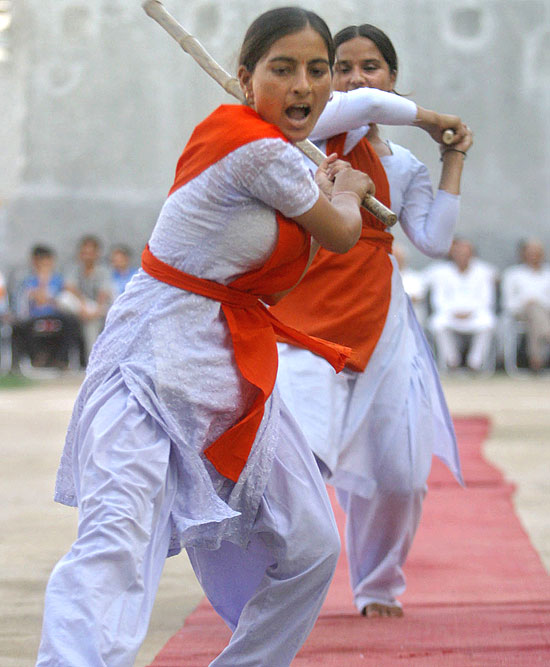 Malaben Rawal (Hindi): What’s the point of all this? Our girls don’t even know who they are anymore. What do girls think about? They think of actresses like Priyanka Chopra. You girls are from the villages, but there’s a different attitude in cities. Today Aishwarya Rai and Sushmita Sen wear skimpy clothes in front of the whole world, pose in front of the cameras, walk the catwalk, answer a few questions, bat their eyelashes and become Miss Worlds, endorsing foreign products, and millions of Indian girls buy these products. And who do they give their money to? Foreign corporations. Are you seeing the picture? And they talk of culture. Where has the self-respect of Indian women gone? We don’t know who we are any more. Remember, if there is a supreme religion in this world, it’s the Hindu religion.

Girls in uniform filing in a line. A man raises a saffron flag with Om on it. Shot of young girls taking a salute.

Aparna Ramteerthkar, social activist, addressing the camp (Marathi): Today...I must tell you your duties as women. Girls should be married by 18 because, by the time they’re 25, they’ll become so strong-willed you won’t be able to tame them. 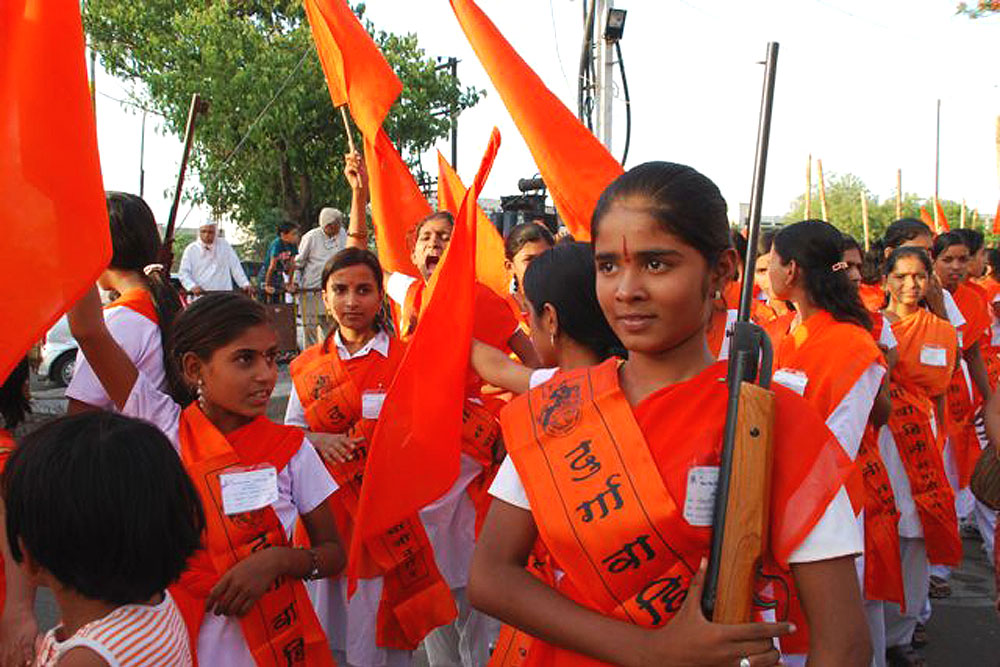 Chinmayee, a 14-year-old, at the Durga Vahini camp

Close-up of a girl blinking.

Aparna (continues): My mother didn’t give me permission to go to school. She said, “If you can read and write, that’s enough.” One evening, I looked at myself in the mirror and got slapped. I still remember her slap.

Aparna (continues): Today, girls are educated, but their heads are in the clouds. Is it really necessary for you to leave your homes, just for your ego, and go chasing a career? Is that really necessary? Have we become so westernised? Erase these thoughts from your minds.

Aparna (continues): We keep talking about equality of the sexes. It’s even written in the Constitution, but think about this. Can you really hide your natural weakness or character as a woman? Five thousand years ago a woman’s character was important. And that hasn’t changed. 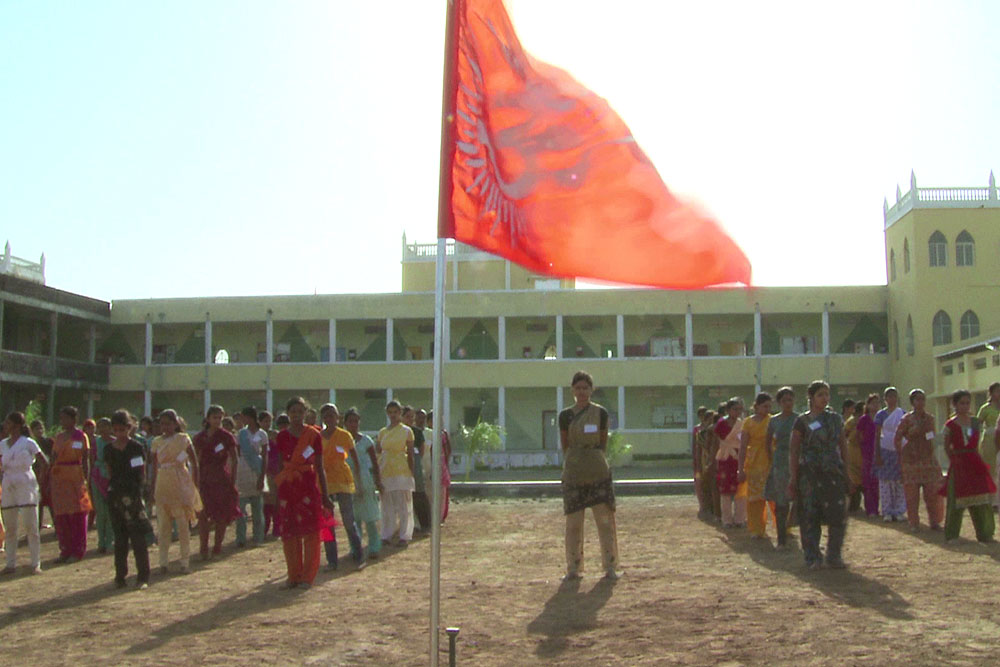 Archival footage of women being beaten in public.

Super: Hindu extremists are also called the ‘Indian Taliban’. They often accuse women of defiling Hindu culture. Women have been beaten for being seen with a man...or for going to a bar. In 2009, members of an extremist group attacked women for drinking alcohol. Two victims were hospitalised.

Trainer, male: You can break the arm, the elbow, the knee or even someone’s neck. So a girl weighing 100 pounds can break the arm of a 250-pound man in seconds. Times are changing, you must be prepared to deal with these times. First twist the hand. Then take his arm under yours, then a slight jerk. He’ll move his arm in a second and if you give him a real jolt you’ll hear the sound of bones breaking. One, release the shoulder, two, yes, three, four.

Hemant Trivedi (Hindi): Prachi has attended these camps since she was three. Now she’s 24.... She’s probably attended about 42 camps.... Because of this, she’s totally mature, grown up and trained.

Interviewer: Would you kill for Hindutva?

Prachi: Whoever goes against my religion. We’ll not go and try to kill anyone, but when they try to attack us, we are also not going to run away or hide. We are going to face them. And if needed, we have to kill. We won’t look here or there. We are going to kill them. Because that is not hinsa (violence)...that is self-defence, that’s what we are doing.

Prachi’s father (Hindi): Nothing would make me more proud than my daughter giving up her life for Mother India. We would be extremely fortunate. There would be no one who would be more happy. But that’s in God’s hands. This generation is getting destroyed. Values are going down the drain. And where will we get our values? We can’t buy them at a bazaar or a mall. We get our values and culture from our parents. I’ve given her good values. If you plant a seed, then you expect a good crop.

By Namrata Joshi with Prachi Pinglay-Plumber