State apathy makes Rajasthan the worst-hit by its third drought 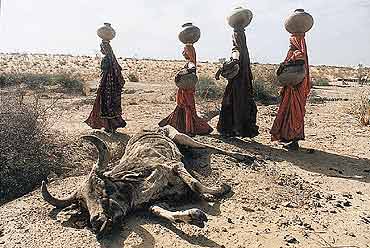 outlookindia.com
-0001-11-30T00:00:00+0553
It's hardly a distinction to be proud of, but Rajasthan is the worst-hit among the six drought-affected states. Every district in the state (except Dholpur) is reeling under chronic drought this year. As many as 30,583 villages, with a population of 330 lakh, have been affected.

Rajasthan, even in an ordinary year, is prone to hunger and undernutrition. But as the latest National Family Health Survey shows, more than half of all children below three years are undernourished and about half of all adult women suffer from anaemia.

For a large majority of these villages, this is a third consecutive drought. The cumulative effect of the suffering of previous years has only compounded the hardship. Failure to stem the slide or to set out basic relief measures has only exacerbated the situation.

There have already been starvation deaths in Banswara district, unemployment is on the rise, children are dropping out of school, cattle are dying or being abandoned due to lack of fodder and villagers are sinking deeper into debt. Worse, migration is taking place in large numbers.

But the irony of it all is that close to 50 million tonnes of grain is lying in public godowns across the country. "There is so much grain that the state government has run out of storage space," says an fci official. In Rajasthan, some of these godowns are located at barely 75-km distance from areas where starvation's rampant.

Official communiques acknowledge the gravity of the situation. Last year in September, state chief minister Ashok Gehlot noted: "Current monsoons have not been satisfactory and it is possible that we might have to face yet another drought. Being the third consecutive bad year, it would be quite a severe drought." Yet despite this bit of 'foresight', precious little has been done.

For one, there has been an unprecedented abdication of state responsibility for drought relief. The Famine Code clearly spells out the duties of the state, unequivocally stating: "Every person who comes for work on relief work shall be provided with work." While this principle has been observed in earlier droughts, stiff ceilings have been imposed this year on the number of persons to be employed. Relief works barely employed 3 per cent of the population, when employment generation in these drought-hit villages was up to 10 times the present level. Today, there are fierce fights over available jobs.

Again, the code requires the government to provide "gratutious relief" to those unable to work. This clause too is given a merry go-by. Families below the poverty line are entitled to 20 kg of wheat per month from the Public Distribution System at Rs 4.40 per kg. But neither this nor the Centre's grandiose welfare schemes like Antyodaya and Annapoorna are being implemented.

As Jean Dreze, professor at the Delhi School of Economics, comments: "As mountains of food stand in full view of drought-affected people, one finds oneself wishing the hungry masses would take the right to food into their own hands." If only.

Granaries Of The Despair State