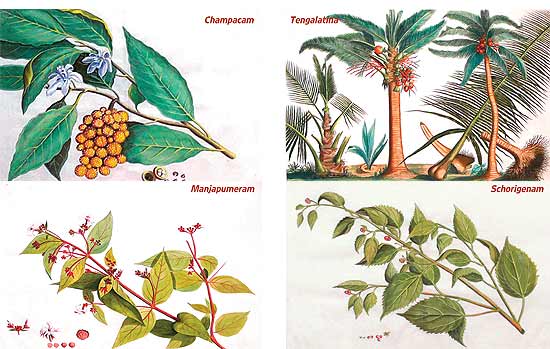 One would be forgiven for mistaking Hortus Malabaricus to be a treatise on exotic plants from the Garden of Eden instead of the Garden of Malabar. For author Hendrik Adriaan van Rheede tot Drakenstein’s (then governor of Dutch Malabar, 1670-77) prose on his many journeys into the dense forests of Malabar (in present day Kerala) is almost as lush as the vegetation. Indeed, in one section he describes that he saw such a marvellous variety of flora that it was difficult to find two trees of the same kind in the same forest.

In a flourish of similes, he likens a tree adorned with green creepers to a magnificent palace. (Hardly the stuff one expects in a preface to a plant encyclopedia.) What astonished him no less was how the natives would pick up a few leaves, crush them to use as a balm or eat them to relieve themselves of some ailment.

The secrets of the leaves, roots, berries etc and their effects on the human body were common knowledge in Malabar in the 17th century, passed down orally from one generation to the next. Rheede was intent on documenting this vast trove of traditional knowledge for his fellow Europeans and proceeded to oversee the scientific description and paintings of the medicinal uses of 742 species of flora of Malabar. It was a herculean task which took him 30 years to complete. As governor, he employed 25 experts for the project, including physicians, botanists, painters, engravers, translators and a legion of 200 supporting staff to gather the plants. The Raja of Cochin and the Zamorin of Calicut readily lent their support. The period was not without political intrigue and in between Rheede found himself posted to Batavia in the middle of the project. But he remained ardently faithful to it. The 12 volumes of Hortus were published in Amsterdam between 1678 and 1693.

For over 300 years the Hortus volumes remained in relative obscurity due to a linguistic barrier: it was written in Old Latin and there was none well versed both in Old Latin and the plant kingdom to decipher it. In 1968, K.S. Manilal, a botany scholar and taxonomist, finally undertook the arduous task of studying Latin for 12 years, collected over 400 species of the mentioned plants and decoded Hortus. The project took 35 years of his life, but an English translation was published in 2003 (published by Kerala University) with a Malayalam edition coming out in 2008.

A comprehensive analysis of the Hortus also throws up some uncomfortable questions, some of which have already got the state’s intelligentsia talking. Like the case of the Hortus’s main contributor, a hereditary Ezhava vaidyan (physician) named Itty Achuthan, who was at the time forbidden from using the official written form of Malayalam, vattezhuthu, because he was not from the upper caste. His certificate in kolezhuthu, published in the Hortus, is a testament to this though, ironically, he was the chief protagonist in the documentation. So Hortus, besides documenting the flora, is also a subverted commentary on the culture, linguistics and social structure of the period. The record shows that initially three Saraswat Brahmins—Ranga Bhatt, Vinayak Pandit and Appu Bhatt—gymnosophists well versed in the classic medical texts, were initially employed to assist in identifying the plants. But when Van Rheede found that the Brahmins relied on their servants for physical verification of the plants he found Itty Achuthan far more invaluable. (In a sense, through the encyclopaedia he created, for the first time, an unimaginable inter-caste collaboration.) Achuthan, a descendant of Kollatt vaidyans, had inherited certain ancient palm leaf manuscripts which set out in detail the medicinal use of various plants. During his time, he was considered the most knowledgeable man in the field.

Commemorating the 333rd year of the Hortus, historians now believe it is the only authentic source of the ancient ethno-medical knowledge of Kerala, pre-dating even Ayurveda. As Dr B. Ekbal, former Kerala University V-C, puts it, “It was a decentralised medical practice that was Dravidian and predated ayurveda. Almost like an internal colonisation, later Ayurvedic practitioners appropriated this knowledge.” Today’s Ayurveda doctors are not too sure about this theory, saying their system is codified and argue that the medicinal properties described in Hortus are based mostly on folklore. Dr K. Anilkumar, executive director of Kerala Ayurveda Ltd, says, “We need to study Hortus to ascertain its efficacy. Like it’s mentioned that the bark of the coconut tree can be used to cure liver diseases. We’ll need research to see if there’s any truth to it.”

Kerala’s traditional knowledge of the curative powers of plants has eroded over the years but with the translation of Hortus an intangible heritage has once again become accessible. Some of the plants mentioned have become extinct, others unidentifiable. Even the health of the forests has declined, with trees now reduced to pygmies: the biggest kokum or kodampuli tree of today would at most fill a man’s armspan today but the book has instances of a similar tree’s girth “filling the embrace of two men”. Hortus is a repository of medical treasures as well as insights: who knew the oil of the common brinjal taken with opium has the potent effect of poison?