Print is tied to a ruthess market. Literary magazines, light purses notwithstanding, are thriving on the internet. 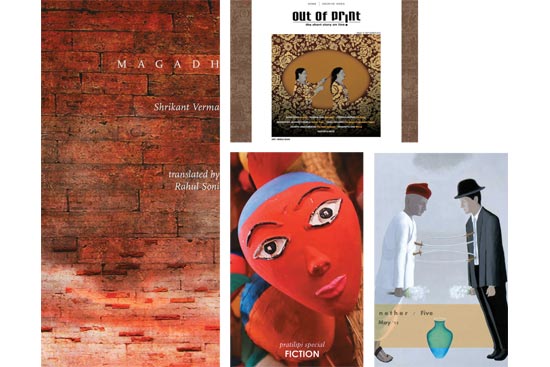 When Arun Kolatkar first wrote his poems in the 1970s, he found acceptance in the world of little literary magazines. These magazines seem to have disappea­red. Although not entirely; many of them have shifted homes to a growing online locality. “There has been a lot of activ­ity in the online literary space in the last couple of years. Countless magazines have come to occupy their own tiny corners, providing readers with distinct literary genres,” says Arup Chatterjee, fou­nder of Coldnoon, a quarterly of tra­vel poetics. For many, like Nether Magazine, the move into creating an online magazine came due lack of space elsewhere.

The pros of having an online literary mag­azine are plenty. “Low costs and great demand,” says Rahul Soni, founder of Pratilipi and associate editor at Almost Island. Acc­ording to him, the online medium gives freedom for experimental prose and poetry missing in mainstream publishing. “Print focuses on replicating success stories, like 5,000 copies of Chetan Bhagat or cam­pus novels that hit six-figure sales,” he says. “Easy accessibility is a great advantage for the online industry,” points out Indira Cha­ndrasekhar. She is the founder and principal editor at Out of Print, a rich short fiction collective. “And they are easier to dis­­­tri­bute,” she adds. For Ambika Ananth, editor of Muse India, the availability of unending space is another feature with which print cannot compete. For contributors too love the online platform. “Writing online provides you visibility and constructive feedback,” says Sakshi Chanana, who con­­tr­­ibutes to Muse India and Kritya.

Yet, online literary magazines are a disparate lot. Out of Print, Muse India, Nether, The Four Quarters and many more aim to publish quality literature— fiction, poetry, translations, with occasional theme-based issues, like in Granta. For others like Coldnoon and Kritya, theme is identity. Every three months, Cha­tterjee’s poetic Coldnoon offers to its readers a volume of travel poems. “Coldn­oon came to be because there was so much of the written word that was begging for space, and having studied extensively on travel, I couldn’t think of anything else,” says Chatterjee. Kri­­tya, a bilingual online magazine, is also a poetic endeavour. Out of Print looks for a mix of old and new voices, and have featured literary giants like U.R. Ana­nthamurthy as well as first-time writers.

The positives may be many, online’s biggest problem is the journalism’s oldest   grouse: Funds. “The foremost hitch in running an online literary journal is relying on grants, patrons and advertisement for long-term sustenance without a solid corpus fund backing,” says Ananth. For Soni, such magazines are a labour of love, run by editors out of their private funds, where content has to be free and contributors remain unpaid. A cash crunch stalled Soni’s first online venture, Pratilipi. Nether magazine editor Avinab Dutta says, “Most local literary journals have no specific revenue or marketing model, they are merely trying to go on.”

The grievous fault in their revenue model doesn’t deter newer online literary magazines from cropping up. “Muse India’s pub­­­­lication expenses are met with monet­ary contributions from well-wishers and we have a strong membership base from over 45 countries, attracting close to 20,000 unique visits every month,” says Ananth. Others, like Out of Print, are blessed with a loyal sponsor. For contributors like Cha­nana, with alternative careers, money is not alluring. “It is that more significant something that one writes for,” she says. Tara Laskowski, editor at Smokelong Quarterly, a flash fiction (fiction less than 1,000 words in length) portal, points to a global trend of such magazines dropping off in numbers. “Internationally, seven years ago, when I started writing, there were so many more magazines online,” she says. But the Indian experience shows otherwise. “The revenue mec­hanics may lead to the petering down of online literary magazines in a few years of their starting, but the coming of magazines in double the numbers is progressive in nature,” says Ananth. For Soni, online magazines are the order of the day. It is like Dutta puts it: “We are in love with and in the business of unsellable things, and there is no backing off”.

By Stuti Agarwal with inputs from Srishti Gupta