Palestinians reel under a rain of words and bullets, Malaysian strongman Mahathir Mohammad announces his retirement and Soviet era's last vestige voted out. 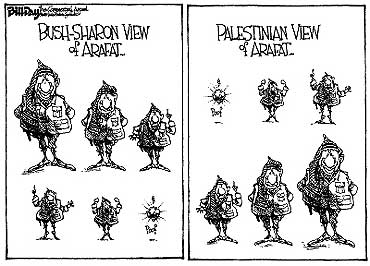 "I am a dictator, all right, because I am not elected. But I think my functioning is most democratic." President Pervez Musharraf, in response to Newsweek's question of returning the country to a more democratic system.

US President George Bush was expected to lay out his vision for West Asia, and provide the Palestinians in their interminable misery a glimpse of what they cherish—an independent state. Bush’s speech last week linking the formation of a provisional state to the removal of Yasser Arafat from the Palestinian Authority (PA) elicited howls of disappointment from West Bank towns which are once again reeling under the curfew imposed by Israeli forces. It seems Bush banked heavily on the anger in Palestine over the rampant corruption in the PA. But what he forgot is that Palestine is too politically savvy to accept directions from the US. The popular verdict is emphatic: the US will always favour Israel, and that Palestinians won’t depose Arafat to satisfy Bush. In fact people here are critical of Arafat for describing Bush’s humiliating speech as historic (because Bush accepted the idea of a Palestine state). Perhaps the Palestinian leader had no choice. It is also a setback to those intellectuals who had publicly spoken against suicide bombing, bolstering as it does tacitly the argument of Islamists—neither the US nor Europe would help Palestinians, who must rely on their efforts to gain independence. Expect more suicide bombing, the support for which has grown manifold in the recent months. Mohammed Daraghmeh

It’s official now: Malaysian PM Mahathir Mohammad will bow out of office in October 2003, after hosting a summit of the Organisation of Islamic Conference. Always a maverick, he broke the news in his inimitable style. Last week, at the annual meet of his United Malays National Organisation (UMNO), Mahathir declared he was resigning as party president—and, impliedly, as PM too. As observers tried to analyse the provocation, citing reasons ranging from sheer weariness and attempts to marginalise Islamist Opposition, an UMNO spokesman revealed on June 25 the blueprint of Mahathir’s retirement plan: he goes on leave two months prior to the OIC meet in October, handing over the command to his deputy Abdullah Ahmad Badawi. Post-summit the arrangement would be formalised.

RUSSIA
Purchasing Power
The last vestige of the Soviet era was voted out Wednesday: the State Duma voted in favour of allowing sale and purchase of land. The 1993 Russian Constitution did allow private ownership, and though many collective farms transferred land to their members, the change in ownership was only on paper. Since members couldn’t sell their share, collective farms controlled most of Russian land. The law is expected to sail through the Upper House.