"They were either asleep, or inept, or both." Senator Richard Shelby, on the FBI's inactivity after receiving warnings of possible terrorists enrolled in US flight schools. 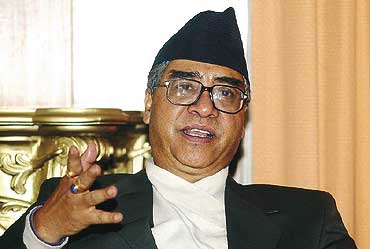 outlookindia.com
-0001-11-30T00:00:00+0553
NEPAL
Caretaker In Trouble
More than the Maoists, it’s the factious mainstream politics that’s thwarting consensus on contentious issues confronting Nepal. This malaise surfaced to compel Prime Minister Sher Bahadur Deuba to dissolve Parliament and call for a fresh election on November 13. Unable to secure the support of his own party, the Nepali Congress, to extend emergency for another six months, Deuba sought to evade defeat in Parliament through its dissolution. He remains the caretaker PM for another six months. Nepali Congress leaders are livid, and reportedly contemplating expelling him from the party.

East Timor
Millennium’s Child
As the clock struck the midnight hour on May 19-20, more than 1,00,000 people on the outskirts of Dili burst out into a tumultuous applause at the raising of East Timor’s flag—a white star on a red, yellow and black background. A new nation was born, the millennium’s first and the world’s 190th. Watched by scores of VIPs, veteran guerrilla leader Xanana Gusmao was sworn in as the island’s first president. East Timor’s past has been bloody. An impoverished outpost of the Portuguese empire for 400 years, the island had its first glimmer of hope in 1974. Then a cartel of Left-leaning generals overthrew Portuguese dictator Marcelo Caetano in Lisbon and promised to free the remnants of its colonial empire. But on December 7, 1975, 24 hours after US president Gerald Ford left Jakarta after a summit meeting, the Indonesian army swept through East Timor, occupying the country until 1999. Amnesty International estimates that around 2,00,000 (its total population today is 8,00,000) were killed during the period. On August 30, 1999, East Timor opted for independence under a UN-sponsored referendum.

US
Pre-Empting A Setback

It was earlier dismissed as just another e-mail exaggeration, of loonies floating bizarre theories on the Net about the US government possessing prior information on the 9/11 attacks. Last week it was disclosed that the CIA had briefed President Bush on August 6 last year about Al Qaeda militants’ plans to hijack civilian planes. An FBI agent from Phoenix, Arizona, even warned that West Asians connected to bin Laden might be training in American flight schools. These disclosures prompted Bush to depute National Security Advisor Condoleeza Rice to counter the criticism that a more efficient administration could have pre-empted the attacks. Rice said the briefing was vague, that the word hijacking was used only twice in the CIA reports. The Democrats are delighted to have stumbled upon a deadly ammunition to attack the President, on a veritable roll post-9/11.