"You cannot buy an Afghan, but you can certainly rent one." Zalmay Khalilzad, US special envoy on Afghanistan, at a recent press conference in New Delhi 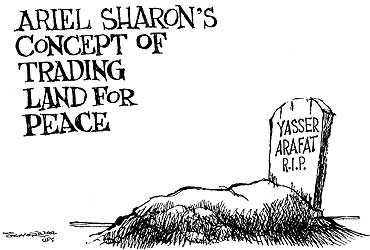 A three-day special session of the 53-member Organisation of Islamic Conference last week couldn’t agree on a common definition of what constituted a terrorist act. The suggestion by the host, Malaysian Prime Minister Mahathir Mohammed, that all attacks on civilians be considered terrorist acts didn’t find many takers. "Groups or governments which support attacks on civilians must be regarded as terrorists, irrespective of the justification of the operations carried out, irrespective of the nobility of the struggle," Mahathir told his guests who were surprised at his definition that echoed Washington’s. The OIC summit that was overshadowed by the spiralling conflict in West Asia, in the end, refused to brand Palestinian suicide bombers as "terrorists".

Afghanistan
Conclave Of The Wise

Last Sunday, a plan was unveiled for Afghanistan to convene a 1,450-member Loya Jirga, or Grand Council, on June 10 to decide who takes over from the interim administration of Hamid Karzai. Only seven days have been set aside for the Loya Jirga, including its inauguration and debates and to conclude the task of appointing an 18-month transitional authority. Seven days is a tough call: in a similar council in September 1964, the then ruler Amanullah Khan spent five days just describing a trip that he had made abroad. This time the situation is enormously more complicated. As per the time-frame agreed upon in Bonn, a transitional authority must be in place by June 22, six days after the Loya Jirga ends on June 16. A positive aspect is the first-time inclusion of women: 160 of them.

In his pre-Easter message, the Pope decided to focus on the rampant sexual scandals that continue to rock the Roman Catholic Church. Church leaders worldwide are facing mounting public ire for protecting priests accused of sexually abusing young boys and girls for decades without fear of punishment. The Pope declared that the Church "shows her concern for the victims and strives to respond in truth and justice to each of these painful situations." In the ongoing saga, more than a hundred priests have been imprisoned and scores more have been forced to resign, apologise and even pay damages. In one such instance, a California woman, Lori Capobianco, 37, who accused a priest, Rev John P. Lenihan, of having abused her sexually and then paying for an abortion when she got pregnant in 1980, won a suit against the Roman Catholic Church to the tune of $1.2 million.

Night Of The Long S-Word