The Shekhawat campaign implodes. And the consequences could be felt till 2009. Updates 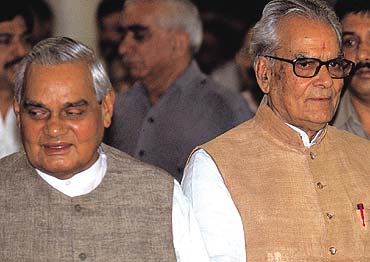 The BJP had hoped that a high-profile presidential poll would act as a tonic for jaded party workers in the run-up to the 2009 general elections. Instead, it appears to have done precisely the opposite. Today, the party's top leaders are hopelessly divided on the usefulness of running a dirty-tricks campaign to get its 'independent' candidate, Vice-President Bhairon Singh Shekhawat, elected. Worse, party legislators in even BJP-ruled states are not enthused enough to turn out in full strength at vote-management meetings.

Unlike those at the forefront of the anti-Pratibha Patil onslaught, like Sushma Swaraj, Ravi Shankar Prasad, Rajiv Pratap Rudy—all owing allegiance to veteran L.K. Advani—those opposing it are a disparate lot. There is the grand old figure of A.B. Vajpayee, party chief Rajnath Singh and senior functionaries Mukhtar Abbas Naqvi and Arun Jaitley. The last named has, of course, quietly walked across to the Advani group, which badly needed his services.

Sources close to Vajpayee, for instance, told Outlook he is disturbed by the BJP's personal attack against Pratibha, the UPA presidential candidate. Says one of them: "Vajpayee has always refrained from making personal attacks—it's part of his nature. He has always believed personal attacks don't help in politics, it is more useful to raise issues." In fact, at the BJP's recent national executive, Advani liberally used the word "tainted" to describe Pratibha, but Vajpayee kept it clean. Resorting to his patented verbal dexterity, Vajpayee criticised the UPA's choice, but with some elegance. He stressed the need to guard against any effort at installing a person who could resort to presidential activism. Of course, Vajpayee could not resist a double-edged retort the day the nomination was filed. Queried on Shekhawat's prospects, he said, "We have just jumped into the fray." For the rest, barring a statement on the day the NDA's candidate was announced, he has maintained a studied silence.

Rajnath has been equally uncomfortable: faced with a barrage of allegations against Shekhawat on Karan Thapar's TV show, he failed to match the sort of strident defence the NDA nominee's representative, Sushma, wearing her 'independent hat', mounts everyday at NDA leader George Fernandes' residence. When Outlook asked Rajnath about the allegations against Pratibha, he squirmed: "These are coming from the Congress, from Maharashtra—we are not pressing them. As an alert opposition, we just want a clarification so that the president's office is not denigrated, and people don't lose faith in the institution." The words subtly echo those being used by the anti-Pratibha campaign leaders, but the tone is distinctly apologetic.

As for Jaitley, he initially kept aloof from the BJP's offensive. But eventually, he appears to have been 'persuaded' to join the Advani team, perhaps to lend it some gravitas. On July 10, he launched a website which, he claimed, provides "extensive information with proper references", and a booklet containing all the negative media reports on Pratibha. Though he described it as a "campaign to provide an informed choice to the electorate", there isn't a word on Shekhawat. And, curiously, unlike the daily BJP briefing, the venue for this was not the party headquarters but the home of its former chief, M. Venkaiah Naidu, who was not present. But, "there is no dilemma within the BJP about this 'responsible campaign'," says Jaitley. "It's also morally correct, and what is morally correct has to be also politically correct."

But now, many in the BJP are beginning to feel that the offensive could be counter-productive. Admits a senior leader: "We'll lose this election, and we'll have alienated two constitutional authorities, whose goodwill we need in '09—the president, and the other Navin Chawla, who will be chief election commissioner by then." There is also concern that Shekhawat—who, like Vajpayee, is seen as representing the party's liberal face—will be tarnished beyond redemption. In fact, some party sources even allege that the Advani camp would be happy if Shekhawat's image is irreparably damaged, as that would leave their leader in the position of being the BJP's only prime ministerial candidate in '09.

If this is the sense at the central level, there seems to be very little enthusiasm in the states. For instance, Rajasthan chief minister Vasundhararaje has reportedly told the leadership she may not be able to deliver all the BJP votes in view of the differences between the Meenas and Gujjars in her state. This is being widely read as her way of expressing displeasure at reports that Shekhawat is working behind the scenes to replace her with state industries minister Narpat Singh Rajvi, who is also his son-in-law.

Then, on July 8, when Advani and Sushma visited Gujarat to meet BJP MPs and MLAs to ensure a full turnout for Shekhawat, Rajya Sabha MP and ex-CM Keshubhai Patel, Lok Sabha MP Kashiram Rana and around 10 MLAs of the dissident group were absent. In BJP-ruled Madhya Pradesh, too, some party legislators failed to show up at a meeting. Asked about this, Sushma responded, "It isn't necessary for all of them to come."

Now, even sources close to Shekhawat are saying they are unhappy at the turn the campaign has taken, especially as allegations against him have begun to surface in the media. Of course, Shekhawat will find it hard to dissociate himself from the campaign against Pratibha, as no one even in the party is willing to believe that he is unaware of it, as he is in daily touch with Sushma. Says a leader close to Shekhawat: "Shekhawat has a secular image like Vajpayee, he also has governance experience. More importantly, he has the capacity to mobilise the support of existing and potential allies. And we all know that the BJP is still not in a position to win an election on its own—so this ability would be useful. Obviously, Advani would not want Shekhawat to return to active politics."

The feeling right now in the party is that, just two years short of 2009, a second-generation leader may not be able to establish himself. Rajnath, the current president, may have RSS support, but he has a mixed record. Besides, the Advani camp—with help from its media followers—would like to tear him down. Gujarat CM Narendra Modi, described by many in the party as the "natural choice", is facing problems within the state BJP, from the c, and is unlikely to bring in supporters from outside the party. Against this backdrop, Shekhawat's supporters feel that he would be the ideal "interim" choice till the baton finally passes on to the next generation. But that ambition may never be fulfilled.