Attempts on Musharraf's life confirm the 'inside' role 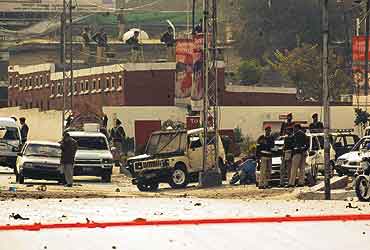 The ISI has arrested Muhammad Naeem (number 4202) of the Special Branch, Capital Police, Islamabad, for his possible links with the December 25 attempt on Musharraf. Inspector General of Police, Islamabad, Fiaz Ahmad Khan Toru told Outlook that Naeem had received a call on his cellphone a few minutes before the December 25 suicide attacks. "It makes him a suspect," Toru said. This call was tracked to the cellphone of Mohammad Jamil, one of the two suicide attackers and a Jaish-e-Mohammad activist from Azad Kashmir (PoK). The other suicide bomber has been identified as Hazir Sultan, a Harkat al-Jahad al-Islami operative from Afghanistan.

Naeem was deployed at the Convention Centre in Islamabad where Musharraf had gone to preside over a function. Investigators believe Naeem contacted Jamil on his cell and gave him the precise location of the presidential convoy.