Instant-Mix Imperial Democracy. Buy One, Get One Free

When a country ceases to be merely a country and becomes an empire, then the scale of operations changes dramatically. ... I speak as a subject of the American Empire. I speak as a slave who presumes to criticise her king. 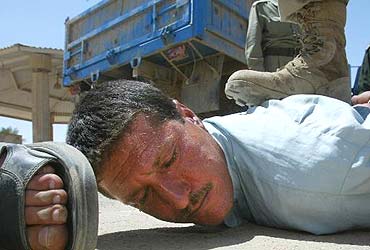 This is the full text of the Center for Economic and Social Rights (CESR)-sponsored lecture delivered by Arundhati Roy at the Riverside Church in Harlem, New York, on May 13. Historically known for its social activism, this is the church where Nelson Mandela spoke and where Martin Luther King Jr. first protested the Vietnam War.

Roy's talk was announced on CESR's website last month, and all 3,000 tickets -- priced inexpensively, at her request, to make them democratically accessible -- sold out within hours. In response to the huge demand, free "overflow" seating with closed circuit TV was arranged; when that was filled to capacity (audience included U.N. officials, well-known actors, activists and intellectuals), hundreds of fans were turned away.

Roy's speech, honored with long standing ovations, and the discussion that followed it, was broadcast on live radio in five major U.S. cities; C-Span, a TV channel that usually airs U.S. Senate hearings, will air the full address this weekend.

In these times when we have to race to keep abreast of the speed at which our freedoms are being snatched from us, and when few can afford the luxury of retreating from the streets for a while in order to return with an exquisite, fully formed political thesis replete with footnotes and references, what profound gift can I offer you tonight? As we lurch from crisis to crisis, beamed directly into our brains by satellite TV, we have to think on our feet. On the move. We enter histories through the rubble of war. Ruined cities, parched fields, shrinking forests and dying rivers are our archives. Craters left by daisy-cutters, our libraries. So what can I offer you tonight?...