This is the Hitchcockesque suspense movie of the year for which you have gotta keep your eyes open. 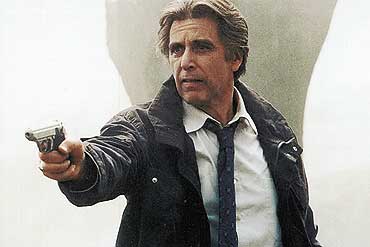 This is the Hitchcockesque suspense movie of the year for which you've gotta keep your eyes open. A thriller of tautly-strung violence and violins, Insomnia is all about the geography of guilt in Alaska, a state where the sun still shines after 10 pm in summer. It's a place where Al Pacino, playing detective on special duty from LA, doesn't get any sleep, because night doesn't fall, it hovers—leaving no escape from natural light. Troubled by bright nights and their criminal conscience, Pacino and Williams toss about restlessly in bed. A remake of a Norwegian film directed by Eric Skjoldbjaerg starring Stellan Skarsgard, Insomnia launches acclaimed indie flick director Christopher Nolan from the 5-million-dollar Memento into the 50-million-dollar league with Steve Soderbergh and George Clooney as producers.

Where do the extra bucks go? The cast, crowded with three Academy Award winners and cinematography that searches for shadows and darkness, in this film noir played out in a season of constant daylight. Bugged by the brightness, no one in Nightmute smiles beyond their molars. Even the lead character's name, Dormer, sounds like dormir, the French verb for sleep. Pitting Pacino, who's been playing cop since Serpico in the '70s, against Williams, Nolan has more dramatic gunpowder than any young director needs. Luckily, both rein in their performances. Pacino, with his early morning gravel voice, arrives in Nightmute with puffy eyes, looking as though he's travelled with his baggage checked under his eyes. Turns out it's an Internal Affairs matter that has been keeping him awake.

Here to solve the murder of a 17-year-old, things go wrong when Pacino unintentionally shoots his partner. Williams, the real murderer, witnesses the killing and is onto Pacino. And the subliminal story spools out the differences between guilt in essentially good and bad men. Hilary Swank steps in as rookie cop to complete the neurotic triangle and Nolan reverts to flashbacks, his favourite device. Kudos to the pugilistic-sounding director of photography, Wally Pfister, here for his visual sequences. Capturing the groggy grindings of Pacino's mind, fans blur, drawers slam like thunderclaps and things go in and out of focus. Even the wipers dragging across windshields belie Pacino's tired lids dying to droop over his sleep-starved eyes. Williams, though, doesn't get as much love and Hillary Swank gets almost none from either the camera or the director. For an actor who went from her muscle-flexing in Karate Kid to a gender-bending performance in Boys Don't Cry, here Swank only gets to look and act like Nancy Drew. Watch out for Nolan, Insomnia shows him rising to latitudes way above Hollywood, as a director who is going to keep audiences awake with his pyscho-suspense cinema.