Inside The Pakistani Mind

Welcome notes on the eve of the Pakistani general's visit 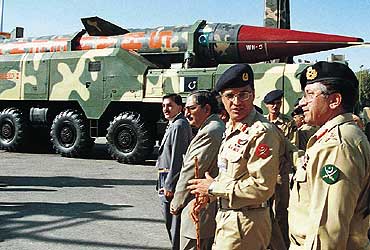 How do Pakistanis organise their defence and security? As India prepares to host the ruler of Pakistan, General Pervez Musharraf, this is a vital question. Clearly, Messrs Atal Behari Vajpayee, Jaswant Singh and Brajesh Mishra would love to get inside the mindset of the Pakistani establishment as they prepare to negotiate with its leader. Ayesha Siddiqa-Agha’s book on Pakistani defence procurement may well come in handy.

In recent years, political scientists have tried to explain how countries make defence and security policy by recourse to notions of “strategic culture”—the shared myths, symbols, ideas and ideals that circulate amongst those who are mandated to protect us from organised violence. Strategic culture is a hard-to-define notion: it seemingly must exist, but it is also very hard to pin down.

Here is a study of Pakistan that avoids the elusive strategic culture idea and tells us a much more prosaic, nuts-and-bolts, institutional story, but one filled with interesting revelations and analyses. Siddiqa-Agha, a former Pakistani civil servant, who once worked in the Pakistan navy, has written an intriguing study of Pakistan’s defence and security which focuses on how the country buys and produces its arms and why. In doing so, she also tells us a lot about Pakistani threat perceptions (mostly India), its response to India (mostly militaristic), its relations with key allies and weapons suppliers (mostly the US and China), and the determinant of all of these things (mostly the Pakistan army).

A large part of the book is fodder for dour military and defence professionals. It describes the various players in the arms procurement process, the institutional settings and sites within which decisions are made, the kinds of security as well as bureaucratic interests that influence the shape and...