Inside The Multimedia Goldmine 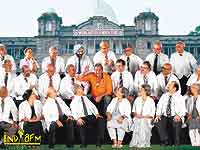 The World Wide Web is well on its way to becoming Bollywood’s global box-office. We’d soon be downloading entire movies from the internet using Kazaa, a file-sharing application owned by Sydney-based Sharman Networks (SN). Mumbai-based IndiaFM.com, a leading Bollywood portal with over 8 million unique visitors, 70 million monthly page views, and customers like Mukta Arts and Tata Infomedia, recently firmed up a distribution deal to this effect with SN’s California-based partner Altnet. Some 35 producers have now joined hands with IndiaFM to vend their movies on Kazaa.com. In November ’03, the gangster flick Supari became the world’s first full-length feature film to be sold online for $2.99.

Once downloaded from Kazaa.com, Kazaa enables users to search and download content shared by content providers or other Kazaa users and share their own files over the internet. The users themselves are responsible for copyright compliance. In conventional web distribution, bandwidth consumption becomes cumbersome when several users simultaneously download heavy media files. But with the decentralised peer-to-peer technology of Kazaa, as Nikki Hemming, CEO, SN, told Outlook from Australia, bandwidth gets shared across its 60 million users, clipping distribution costs by 90 per cent.

Kazaa is targeted at the wired world. Experts maintain that despite a measly 1 per cent internet penetration, tardy dial-up connectivity and 45th ranking among 102 countries in ict readiness and usage, broadband’s inflection point is only 16-18 months away in India. Net-over-cable is on a visible roll and the broadband revolution, asserts Kunal Dasgupta, co-chairman, ficci, entertainment committee, looks poised to swamp the entertainment industry.

So, there’s no dearth of big-ticket takers for the idea in Bollywood. The best of 2003—from Devdas to Chalte Chalte and Munnabhai MBBS—have all been signed up and many more producers have evinced interest.

Valley Of The Jinx