Inside The Kalinga Cabal 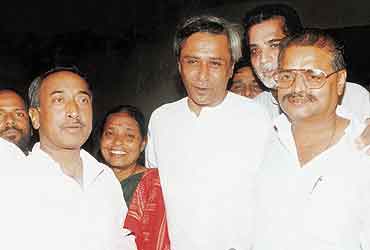 outlookindia.com
-0001-11-30T00:00:00+0553
When Orissa strongman Biju Patnaik breathed his last, it was not his son and present chief minister Naveen Patnaik who was at his bedside. Biju babu spent the last two years of his life at the home of his protege Dilip Ray. And it's Ray and his friends in the Biju Janata Dal (BJD) who have now become the staunchest critics of Naveen and vowed to upset his plans in the forthcoming assembly and Lok Sabha polls in the state. In fact, if there is one factor that could work against the chief minister, and to the advantage of the Congress, it is Ray and the BJD rebels.

In Naveen's four years as the BJD chief, each one of Biju babu's faithfuls—Dilip Ray, Bijoy Mohapatra, Nalinikant Mohanty, Ram Krushna Patnaik—have been thrown out of the party. With simultaneous elections around the corner, many of these BJD founder-members are joining hands with the Congress—a party they had worked all their lives to defeat.

The finer details of their alliance with the Congress are yet to be worked out. But given that most of them—Rajya Sabha MP Ray, Nalinikant, Ram Krushna, Aska MP Kumudini Patnaik and many mlas owing allegiance to them—met Sonia Gandhi this week, Biju's old followers have clearly aligned with his fiercest enemy to fight his own son in the 'battle for Kalinga'. Says Ray, the fulcrum of the Naveen-baiters, "There is no time to waste. If Naveen is to be defeated, we have to align with the Congress. They have shown us due respect. We may have some unresolved issues but right now the prime aim is to get Naveen Patnaik and the BJP out. They have destroyed Orissa in the last four years."

To chalk out strategy and discuss the parameters of the talks with the Congress president, the rebels gathered at Ray's residence in Delhi on January 29. They met Sonia in the afternoon and later revealed that they could formally merge with the Congress only after the dissolution of the Orissa assembly that is likely to happen in February. "We have met Soniaji. The final plan will be announced on February 6. There is no going back now. We are with the Congress," Ray told Outlook.

It's all the beleaguered Congress can ask for, given that it won merely two of the 21 Lok Sabha seats from Orissa in the last elections. For the Pradesh Congress Committee (PCC) chief J.B. Patnaik, who lost his Athgarh seat by a huge margin of about 40,000 votes in the last polls, this is a chance to recover from the humiliation. He also faces the infamy of being allegedly involved in the Anjana Mishra rape case of January '99. J.B. was removed as CM by the Congress high command after Anjana Mishra dragged his name in the fir, alleging that she was raped by his cronies. Now, perhaps, is his chance to clear his name.

In fact, J.B.'s Machiavellian presence in the Orissa Congress is the prime cause of discomfort for the BJD rebels. While seen as the only one to enthuse the party cadres enough to take on the BJP-BJD combine, the rebels feel his past notoriety will work against the Congress. "Genetically, we have no problems with the Congress, only a pathological irritation with J.B. Patnaik. You see, the Congress and us are the same breed. Biju babu was a Congress CM. But dealing with J.B. is different, the worst being the fact that he is so unpopular. The Congress has to think about whether he should be projected as the chief ministerial candidate," says a BJD rebel.

The PCC chief handicap is not lost on the BJP-BJD alliance. In fact, the BJP's election supervisor Pramod Mahajan was quick to highlight this at a meeting he addressed in Bhubaneshwar last week. "The Congress has made our task easy by fielding J.B. Patnaik. We don't have to do anything now except print posters with Naveen and J.B.'s pictures and let people decide who's the better candidate.I have no doubt who the people will choose," Mahajan said.

J.B. himself seems unruffled by such comparisons. "The BJD government is totally discredited in Orissa. We're talking with all the rebels and they agree that they have to merge with the Congress. Our party will fight the election with everyone in the Opposition and defeat the alliance. There is a strong anti-incumbency wave here. You just wait and see, we will form the government here and win a majority of the Lok Sabha seats. Naveen Patnaik has given a corrupt and inefficient government to Orissa," J.B. told Outlook.

But J.B.'s posturing as a "clean" alternative to Naveen does not fool the electorate. "Chhalni kou chhi chhunnchi lo, to dahre gota e kona (a typical case of the pot calling the kettle black). J.B. may be a good organiser and a sound politician but he is very unpopular and has a corrupt image. The Congress has no chance if he is pitted against Naveen," says a Bhubaneshwar-based political analyst.

According to Shrikant Jena, a former Janata Dal MP who joined the Congress much before Naveen Patnaik started eliminating the stalwarts in the BJD, the Congress can win this election only if the BJD-BJP vote share is divided. Together, the alliance has a formidable 57 per cent votes in Orissa while the Congress share is restricted to 30-35 per cent. "We stand a chance only when their votes get divided. It is heartening to see that senior leaders in the BJD have finally seen the light. But I can't say how effective they'd be if they merge with the Congress. If they fought on a separate platform, it would have definitely divided the BJD votes," says Jena.

Jena's former associate and another BJD founder-member, Bijoy Mohapatra, is the sole rebel who too feels they should fight from a separate platform without merging with the Congress. Mohapatra floated his own outfit, the Orissa Gana Parishad, after he was shown the door by Naveen in the wake of the BJD sweeping the assembly polls in Orissa in March 2000. He was working hard to get the rebels together on one platform and even held a public meeting with the rest—Ram Krushna, Nalinikant and others—in Rourkela. But J.B. seems to have outwitted Mohapatra. After this week's meeting with Sonia Gandhi, it is only a matter of a few days before Mohapatra's comrades announce their formal merger with the Congress.

Despite this setback to his plans, Mohapatra is still chipping in with his bit to oust Naveen. "All of us are working with the common purpose of defeating Naveen. He has to go for the larger good of the state. Fact also is, there is a lot of disenchantment among the party cadres. The buzz is that over 30 sitting legislators would be denied tickets this time. It should not be difficult for the Opposition to make use of this opportunity," says he.

Meanwhile, Congress prospects have begun looking up in the coastal state. They're still far from being bright enough to outshine the BJD-BJP. But at least they'll help the party put up a fight.