What is it that makes the Indian middle class treat their domestic help with such derision and abuse? 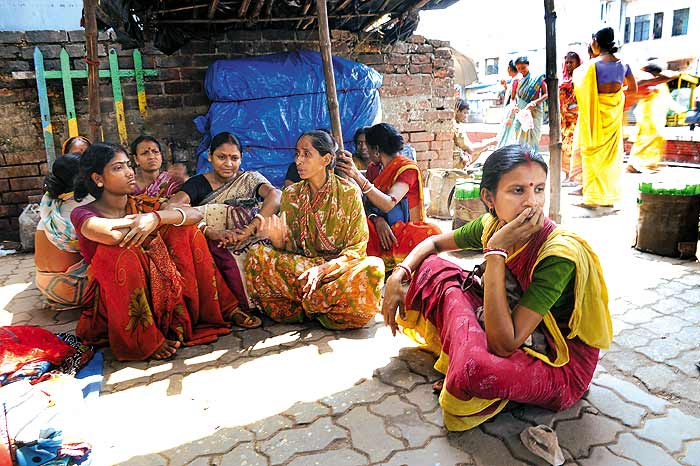 In her nine years as a nurse working with rescued domestic workers in Delhi, Mariamma K. thought she had seen the worst. That was until 2010, when she and her colleagues went to rescue a 17-year-old girl from a home in west Delhi. Sangeeta was found with bite marks all over her body. “We were completely shocked. We didn’t know if we were looking at an animal or a human,” recollects Mariamma, who works with Nirmala Niketan, a group fighting for the rights of house-helps.

Her employers initially claimed, quite incredulously, that she was biting herself but that didn’t explain the marks on her neck. They then changed tack—the lady of the house was deemed unstable. “But we didn’t buy that either. Why did she bite only her help and not her children?” argues Mariamma. The matter was later “settled” out of court. The girl’s family got Rs 50,000, after which she was sent back home to Assam.

Mariamma may still be able to recount the worst case of abuse she’s ever seen, but it’s not that easy for volunteers at Delhi’s Domestic Workers’ Forum. For it could be Veena from February last year, whose employer literally chose to dig in her heels—rather, her stilettos—into her back. Or what about Shobha, a 15-year-old from Jharkhand, whose employer, a nurse, branded her chest with a hot iron? Or Hasina from West Bengal, a minor salvaged from a bureaucrat’s house in November last year, whose private parts had been repeatedly prodded with a rolling pin?

90 million is the estimated official number of domestic workers in India; only 269 of the approx 2,300 placement agencies in New Delhi are registered.

Now the picture may look particularly grim in the national capital (the latest case, from last month, is of a tortured 13-year-old Jharkhand girl, locked in by a vacationing doctor couple with frugal rations) but the truth is, across the country, particularly in north India (see list), abuse of domestic helps is on the rise. What has brought about this pattern of deliberate brutality? Is it because the affluent in cities find a deluge of workers in a market that has no checks against their exploitation? Is it the poor, rather negligible conviction rate, the money-conquers-all attitude which has emboldened this cruel streak in city-dwellers? (The latter perhaps is a valid thought; even as they were being charged, the aforementioned doctor couple had the audacity to publicly offer Rs 75,000 to settle the case.)

This is especially true of a nouveau riche middle class who seem to have no empathy with the poor. In fact “most think that by employing a maid, they are doing some service...feeding the poor. There is a lot of aggression, anger among these people”, says social worker Rishi Kant who has helped rescue many such girls. “At some houses, the employers actually ask us why we are taking them away when they are at least being fed there....” Another activist, Rakesh Senger, adds “They think they are doing these kids a favour if they pay them Rs 1,000 a month, give them second-hand clothes and feed them scraps.” 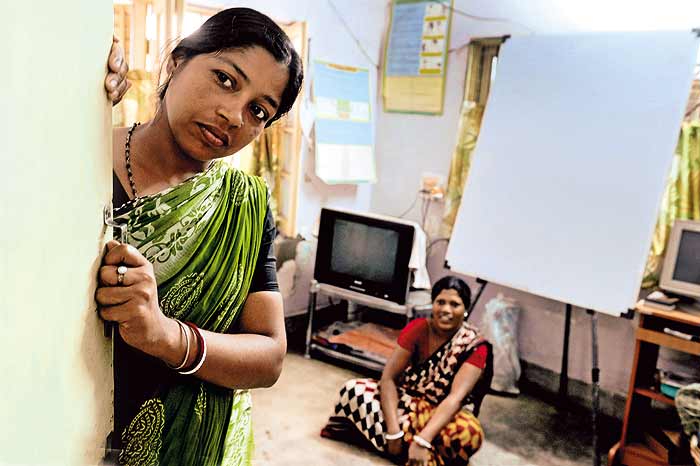 Namita Haldar What does it say about India’s rising middle class that in the dozen-odd houses that Namita works in, she is not allowed to use the bathroom in even one? Still, she must count herself lucky—the indignities others suffer extend to physical abuse. (Photograph by Sandipan Chatterjee)

Given the recent flare-ups and the outrage (at least in the media), it is a relationship that many now openly characterise as that between a modern master and slave. These are reflected even in minute dealings with the help. Take, for example, the case of Namita Haldar in Calcutta, who works in several homes but is not allowed to use the toilet facilities in any of them. “It doesn’t occur to us to treat them like humans because it is deep-rooted in our psyche to somehow consider them less than human. Just because we are paying them, people think they should get their money’s worth, right down to the last penny,” says Kakuli Deb of Parichiti, a city-based rights group.

Most of this subjugated workforce, of an estimated 90 million domestic workers in the country, comes from impoverished regions in states like Jharkhand, Bengal and Chhattisgarh. It’s no surprise that a substantial number of them are trafficked into big cities to spruce up urban homes, smoothen out the harried lives of city-dwellers. West Bengal alone reported as many as 8,000 missing girls in 2010 and 2011. Hapless girls from the tribal regions are especially in demand, says Sanjay K. Mishra, who helps rehabilitate rescued domestic workers. “They are simple and innocent and, crucially, without a support structure. So abuse is rarely reported.” Often the parents have no idea where the girls have been taken by agencies and, being illiterate, they are open to all sorts of exploitation.

Feeding on this vast market are the numerous, obscure ‘placement agencies’ (some 2,300 in Delhi alone). Employers pay these agencies to hire a help and, in most cases, pay the monthly salary also to the agency instead of the worker.

And while child labour may have a stigma attached, even today most people tend to look the other way. In Calcutta, Mukul Das, who runs a small business in busy Gariahat, says “maid children” are more “obedient”. His last one, 8-year-old Shefali, would clean, sweep, cook and then sleep on the floor. It was apparently a great bargain. Last year, 116 ‘workers’ were rescued from middle-class homes in Delhi; only four of them were over 18. A survey in Mumbai two years back found nearly 60,000 girls between 5-14 employed as domestic workers. 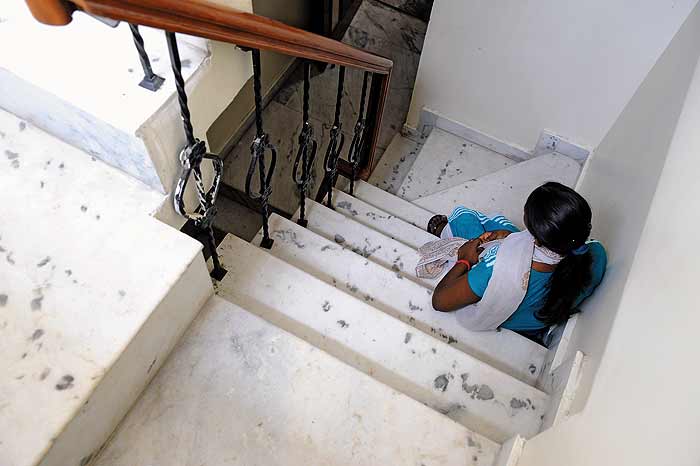 Chandni Still only 18 years old, she was raped repeatedly by her employer’s father-in-law in Amritsar. To add to her woes, she was raped again in Delhi by a man who had promised to help her. And for her years of work, she didn’t get paid a paisa. (Photograph by Jitender Gupta)

12.6 mn children work as domestic helps, 86% are girls and 25% of them under 14—the minimum age prescribed in anti-child labour laws.

Now there’s a common rationalisation, more so among this very same middle class, that at least these kids are being fed and clothed, that they are lucky to not find themselves in a brothel. But that’s no guarantee that they won’t end up being sexually abused by their employers. Like Chandni, now 18, who says she was raped in Amritsar by her employer’s father-in-law and then raped again by a man in Delhi who promised to help. Recalling her woes, she says she couldn’t even call people back home. “The landline would be locked away when they went out. They would hit me with shoes and I never got a rupee for all my work,” she says. Madhuri Singh, a Delhi journalist who came to report on her case, now employs her. Madhuri explains that the middle class exploits these young girls because they are “voiceless”. “The employers know that it is their voice that is heard among the decision-makers, not the worker’s.”

Ironically, even those in positions to make the lives of workers better are not above inflicting abuse. Recounting one such case, the head of the Andhra chapter of the National Domestic Workers Movement describes how two children were tortured at a retired dig’s home in Hyderabad. The girls, aged 14 and 15, were employed to look after the retired cop’s grandchild. Once when the child was found wandering close to the swimming pool, the dig punished the maids by making them stand neck-deep in the pool an entire night. “When the children managed to escape from the house, the officer filed a case accusing the girls of stealing jewellery. Investigations instead revealed that the girls were physically tortured.” 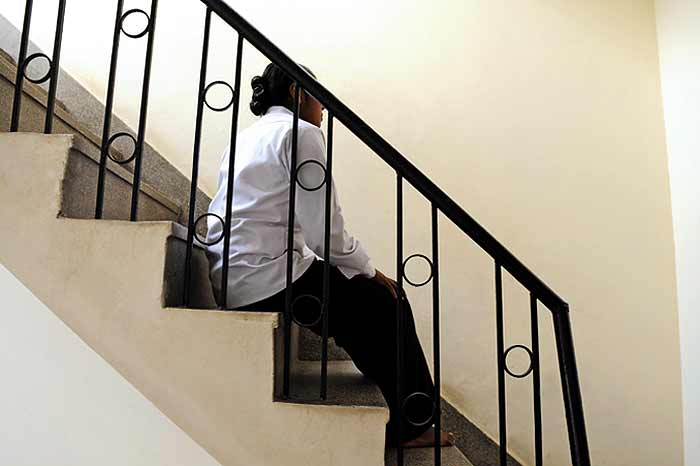 Maniroopa A minor from Tanger village near Ranchi, she suffered much abuse in Delhi. Later, rescued and trained by an NGO. (Photograph by Jitender Gupta)

A major problem with the domestic worker market is the scarce information agencies provide of workers that makes exploitation easier. “Every agency should give a full record of the help they provide. Is she a goat or a showpiece that you can just buy and keep in your home? And if you do employ one, why should it not be recorded somewhere?” asks Subhash Bhatnagar, coordinator of the National Campaign Committee for Unorganised Sector Workers.

While a draft bill to protect the rights of domestic workers was ready as far back as 2008, it’s still lying with the National Commission for Women (NCW). “It’s going to take a long time before it gets enacted into law...many of the decision-makers themselves depend on domestic workers. I won’t be surprised if some of them even employ child workers,” says Bharti Sharma, ex-chairperson of the Delhi Child Welfare Committee.

Similarly, legislation in states too has been stuck. Clara, coordinator of the Tamil Nadu Domestic Workers’ Union, says she had lobbied with a DMK minister in 2007 to fix Rs 30 per hour as minimum wages, but the decision was postponed. “Early last year, the minister told me the decision was further delayed since elections were approaching and the government did not want to antagonise the employers.” Union representatives who met the labour secretary in March were informed that the “issue is under process”. Everyone knows that legislation can take its time but that hardly permits middle-class homes from being zones of inequity and oppression in a free and independent India.

(Names have been changed in most cases to protect privacy)