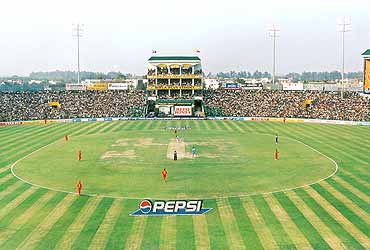 outlookindia.com
-0001-11-30T00:00:00+0553
Picture Sachin Tendulkar and Brian Lara in the same team facing Shoaib Akhtar and Brett Lee operating with the new ball from the two ends. Or, even Mohd Azharuddin and Ajay Jadeja coming in from the cold, and hitting sixes and fours. This is what Jagmohan Dalmiya's brainchild, the Corporate Cup, promises if its gets off the ground. The flamboyant Board of Control for Cricket in India (BCCI) president is planning a brand-new all-star day-night tournament, beginning next summer, where some six participating teams will be allowed to field a maximum of four overseas players. Corporates have to fork out Rs 25 lakh each to field their teams and take a shot at the Rs 1 crore-prize money. The corporates can freely sign up Indian and foreign cricketers. To help them feel more secure, Dalmiya makes it mandatory for domestic players to participate. "They (the teams) will be allowed to sign any player for the event. So you might see players from different cities and states fighting for the cause of one team," he says.

BCCI has enough reasons to launch such a starry tourney. Says its joint secretary Jyoti Bajpai: "Nine of our 27 stadia are equipped with flood-lights. Most of them are incurring heavy interest on the Rs 5-crore loan taken for installing the facilities. They get one international match in three years and it's not financially viable to have them out of operation for months on end." Adds BCCI media manager Amrit Mathur: "We are unable to do much with cricket in the summer. The Corporate Cup creates facilities, explores new markets and helps domestic players financially."

But the board might have over-reached itself on this project. Reason: a number of major sponsors don't share the enthusiasm. They find the cost prohibitive and are not sure if the BCCI, with its infrastructure, can pull off such a tournament. Says Ganesh Mahalingam of LG Electronics: "I don't think I will be interested. There is passion in cricket matches when it is country vs country. For me, it (Corporate Cup) will be nothing more than an exhibition match."

Most corporates reckon the expenses would not stop at the Rs 25-lakh entry fee—they say the figure could touch Rs 3 crore each which includes payments to stars and even first-class cricketers. The BCCI also has to be careful about the TV rights issue. It plans to host the Cup next summer when the five-year deal with Doordarshan would have come to an end. (DD paid a hefty Rs 224 crore for exclusive domestic rights.) But the Board is already lagging behind in fulfilling the all-important clause of letting DD cover at least 27 days of international cricket involving India at home every season. DD also has the exclusive rights to telecast domestic cricket. "The international series scheduled in India this year do not quite add up to the number of days we need every season from the BCCI because Pakistan's scheduled trip to India didn't materialise," says K.S. Sarma, ceo, Prasar Bharati.

Clearly, the Cup could act as one sop. What could create problems is that the Abdur Rehman Bukhatir-promoted Ten Sports is reportedly keen for the Cup's rights. And when you can't rule out Zee TV and Sony bidding, it has all the makings of an unsavoury controversy.

Even the board's binding terms for players in the Corporate Cup hasn't gone down well with them. Arun Lal, VP of the newly-formed Indian Cricket Players' Association, is not pulling his punches. "How can the Board make it binding on players. After all, they are not donning India colours. You can't force an international cricketer to play for, say, Hero Honda XI," says Lal.

But the biggest problem for BCCI will be organisational. For a body which doesn't believe in delegating responsibility, the board will have to tackle issues like media management, security, and ground and marquee planning which should be fool-proof, befitting a project like Corporate Cup.Even Mathur admits: "The biggest issue will be the administrative handling of the event." Though Dalmiya is upbeat and busy hammering out a financial plan for the event, chances are the Corporate Cup could remain a still-born tournament. Watch this space.