Indy Is The Pendant

Tata Motors has taken the corner, now it sells even in England. But hey, watch the rearview mirror. 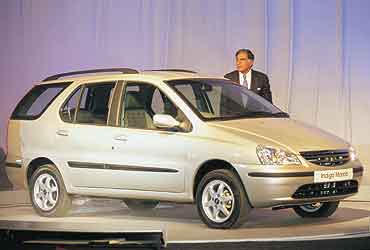 Each time, Ratan Tata has silenced the sceptics, most resoundingly now in passenger cars. In 1996, when he unveiled his dream project to build India's first indigenous four-wheel passenger car, most experts scoffed at the idea. But five years since its launch in January 1999, Indica has become India's second-largest selling model in the B segment, which includes Zen, Santro and Alto. Indigo, the three-box saloon from the Tata stable, has gone a step further, outselling every C segment model (like Ikon, Esteem and Opel Corsa) in eight of the 13 months since its debut in January last year.

Although Tata Motors, makers of the two models, doesn't give a segment-wise break-up of its turnover, car revenues are expected to cross the $1 billion mark this year. More than that, Indica has just made an appearance on British roads. Rechristened City Rover and sold under a tie-up with Birmingham-based MG Rover, its UK sales may be around 100,000 over the next five years. "You will soon see or hear of Indian cars in England," says the Tata Group chief, who retains the right to sell the car separately as Indica in the UK and other markets.