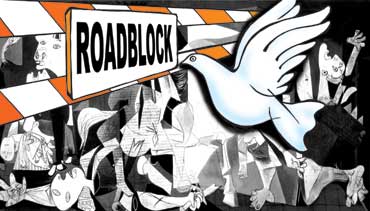 In the hysteria triggered last Monday when 60,000 Kashmiris began to march towards the Line of Control (LoC) with the intention of crossing it, most commentators have traced the origins of the current agitation to the dispute that was ignited by the transfer of land to the Shri Amarnath Shrine Board (SASB). This has allowed everyone in New Delhi to put the blame for the present conflagration upon 'Kashmiri separatists' who have seized upon the issue to revive their political fortunes. According to this interpretation of events, N.N. Vohra, the new—and by implication, inexperienced—governor of Jammu & Kashmir, made a mistake when he hastily annulled the land transfer. Had he not done so, Hindu bigots in Jammu would not have gained an opportunity to go on the warpath, and the BJP would not have been tempted to fish in troubled waters. The reasoning along this line goes that Vohra should therefore be replaced.

But this version of events is factually incorrect. And far from being a culprit, Vohra could be India's best hope for preventing the resumption of another bloodbath in Kashmir. The Amarnath shrine board affair was an agitation waiting to happen. Eighteen years of militancy, followed by incessant attacks on yatris by a new breed of jehadis after the Kargil war, made it necessary to provide yatris with heavy security. This forced the state to play a major role in the organisation of the yatra. Instead of coming in small groups spread over the entire summer, yatris were asked to come within a 15-day period, later extended to a month. That changed the nature of the yatra.