Geographical Indication Or Global Irritation? Nothing Official About GI Tags

From the ubiquitous rosogolla to the Basmati rice, from Mysore silk to Kolhapuri chappals, how India's GI law is completely messed up 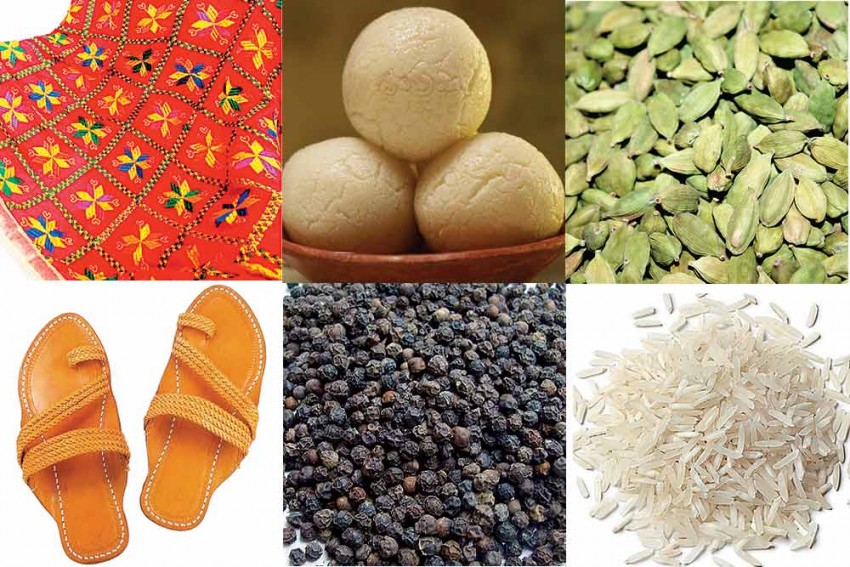 A book’s cover indicates little about the merits of what lies bey­ond it, and we are exhorted, ever anon, about the utter vac­uity inherent in a name. Yet, look at the alchemy triggered in our minds at the merest mention of the words ‘Champagne’, ‘Tequila’, ‘Cognac’, ‘Scotch’ and ‘Napa Valley’ wine. Enormous prestige accrued through centuries of experience and craftsmanship has earned these liquors—the real thing, brewed in situ—the cachet they command globally.

This traditional renown that products of unimpeachable quality enjoy has been bolstered by formal Geographical Indi­cation (GI) tags—a form of intellectual property (IP) protection based on geography and tradition key to preserving a country’s natural resources and cultural heritage, as expressed in products with unique means of production. GI was a European idea, meant to give recognition and ensure monetary benefits for artisans and craftsmen, along with farmers and traditional manufacturers.

Instituted by the World Trade Organi­sation (WTO), GI identifies a product as originating from a particular place and whose quality, reputation or other cha­racteristics are attributable to its geography. The tag was developed to protect consumers from fake products and producers from resorting to lower prices, as it provides producers/manufacturers control over production and sale of these original products.

Indian producers are still learning to explore these ideas in their fullest and are battling to reap the benefits of our art, heritage and food that could bring us on the international trade canvas. Even with our GI regime being over 15 years, with GIs for 330 Indian products like rosogolla (the sweet that triggered a bitter tussle between West Bengal and Odisha, and both states were awarded GI tags a year apart), Basmati rice, Navara rice, Kol­hapuri chappal, Mysore silk, Phul­kari,  and Odisha ikkat, the gains, for all stakeholders, are still modest. The meagre takings are due to lack of clarity, failure of product custodians to understand their value, liberally doling out GIs and the failure of government departments. The result is friction among communities with similar, competing products.

A case in point is Kerala’s famous Navara rice, known for its medicinal properties. The granting of a GI for this rice variety in 2007 to Navara Rice Farmers’ Society has incensed other growers of the crop in Kerala and Tamil Nadu. However, only farmers associated with the Society can sell their produce as ‘Navara rice’.

Sridhar, from Kerala-based NGO Thanal, which works with farmers on sustainable agriculture, says, “Nobody has evidence on the historical origin of Navara rice. Besides, you cannot grant GI on seeds, because with migration, seeds also migrate and adapt to local ecology with genetic changes.” He calls for more clarity in GI laws.

As if to obviate this, GIs for phulkari, the exquisite style of embroidery, has been given to three states—Punjab, Haryana and Rajasthan—in 2005. The Punjab Industrial Export Corporation, backed by Punjab State Council for Science and Technology (which helps in apply for the tag), was the recipient. PSCIST executive director J.K. Arora explains: “The reason we allowed GI for three states is because artisans, mainly women, have migrated to areas like Ambala (Haryana) and Ganganagar (Rajasthan) after marriage and we didn’t want to de-recognise them about art passed on to them by mothers, grandmothers and great-grandmothers.”

India’s GI law creates tension between groups and stops many from calling produce by age-old names.

Such sagacious judgement is an aberration: India’s GI regime is riven with inner conflicts. Legal and IP expert Prashant Reddy says, “India’s GI law is messed-up. Iro­nically, instead of creating value for these products, the law is creating tension between communities. Besides, it is also stripping entire communities of artisans of the right to call their products by their traditional names.” He questions the rationale behind giving GIs to institutions that are neither producers, cultivators or custodians of the products or the manufacturing process.

Geographical Indication Registry deputy registrar C.G. Naidu defends the decisions. “Indian states were divided linguistically, not geographically. So when we are processing a GI application we try to find facts and after experts vet them, decisions are taken,” he says. The process, he adds, is transparent and protocol is followed asking for objections.

Yet, such objections and applications are restricted to GI-specific, English-language journals—the man on his loom, if you like, will never know about them. Sridhar says rival producers came to know of the Navara rice GI grant after it was too late to protest.

In a GI-related litigation in 2012, the judge suggested framing a law requiring mandatory declaration akin to the publication of notice under Section 4 of the Land Acquisition Act 1894. As few artisans know English, GI-related news must be published in a local language.

In India, GIs are provided for 10 years and need to be renewed. Glaringly, many GIs being provided in India are to government organisations and departments, not to communities that are custodians of those products.

For example: Nagpur oranges are characterised by a unique sweet-sour gradient of flavour and has a matchless aroma—the result of a unique acid-­sugar blend not found in any other ora­nge. The GI for Nagpur oranges has been given to Dr Panjabrao Deshmukh Krishi Vidyapeeth. Its vice-chancellor V.M. Bhale says, “The university applied for the GI because we acted as a custodian, helping farmers as they don’t have the skills and money to get into the nitty-gritty of GIs.” He adds that anybody from Vidarbha who wanted a GI should appr­oach the university; which would make a decision based on their assessment.
Naidu defends the practice of giving GIs to government institutions: “It’s because they have finance, manpower and legal expertise to understand intricac­­ies.” When GIs are countered overseas, he stresses, only such institutions can protect Indian interests, not farmers.

In a cut-throat world of GI claims and counter-claims, Naidu has a powerful case. But have we failed our traditional communities—who have kept the heritage alive, after all—by failing to emp­ower them to a level where they control the destiny of their products? If farmers in the EU and the US can get a premium for their GI products, why not Indians?

Actually, government bodies could easily have empowered local communities by backing them to apply as applicants, thus making them better informed. The vast agricultural universities network across India could have been played an important role. Such communities, to reiterate, are the act­ual and rightful inheritors of traditions. Also, India has no data to assess how GIs have helped Indian communities after years of the GI regime, in terms of prosperity and growth of exports.

Legal and IP expert Shalini Bhutani says, “The National IPR Policy (2016) makes the generation of IPRs (including GIs) an end in itself. Yet the issues in the implementation of India’s GI regime need to be addressed to make it meaningful for local communities, though the GI act was not originally about them. Secondly, GIs can create intra-community rifts because natural and agricultural goods do not know political boundaries. The vetting process has to accommodate that, while making consultation with local communities part of the procedure. The GI Act was legislated as per a WTO prescription. And India needs to have a clear strategy on how to carry on the imposed legacy of GIs at an international level.”

India’s GI legacy started with Darjeeling tea. A tea estate owner says, “The GI tag was a good step for the Darjeeling tea industry as it helps check authenticity. However, the GI tag didn’t impact business much, because the government didn’t make strong efforts, like EU and the US do for their premium products.” Over 80 per cent of French champagne and cognac, he offers by way of example, have GI tags, with the government’s active promotion. Our Centre and state governments fail to learn from these examples, he laments.

Indeed, most of India’s unique products, prized around the world, are not backed by financial resources and legal astuteness that only big corporates can muster. Only with the state’s help can our oranges be stamped by the unquestioned imprimatur of a GI tag.