Donald Trump has once again offered to mediate the Kashmir issue. The challenge before India is to deal with Trump’s renewed offer to negotiate while trying to avoid diplomatic unpleasantness. 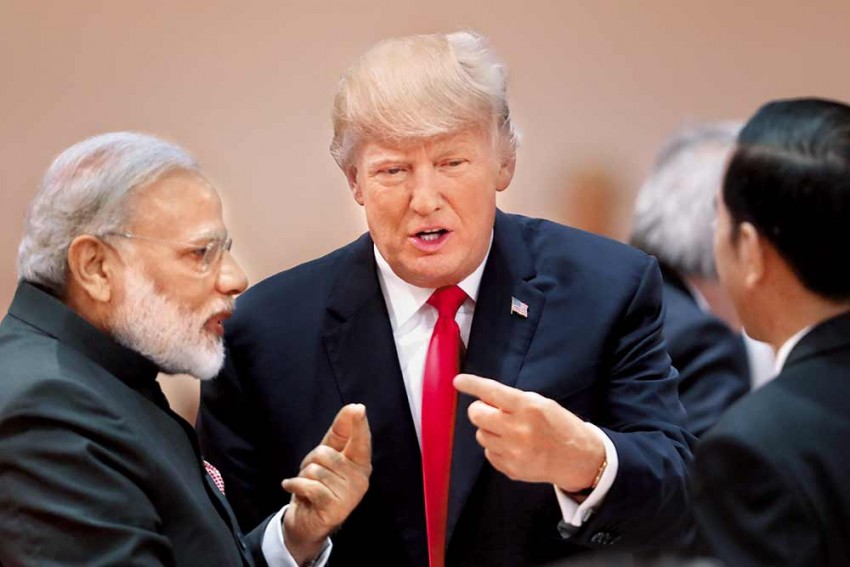 Big Talk
Prime Minister Modi and President Trump are to meet at the G7 summit in France on August 24-25
Photograph by Getty Images
Pranay Sharma August 22, 2019 00:00 IST India's Fresh Challenge On Kashmir: Engage With Donald Trump But Without Opening Another Front 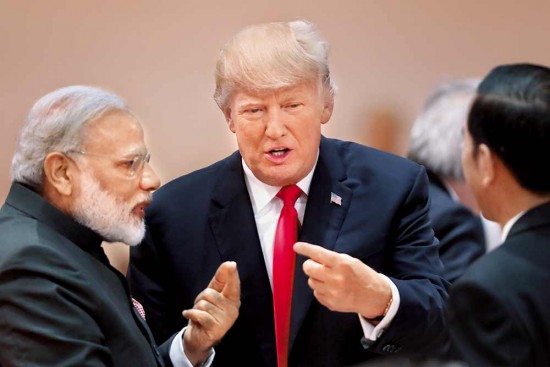 It was an artillery barrage from a sector that had quietened down. At a time when India was busy fighting a diplomatic battle against China and Pakistan’s joint effort to ‘internationalise’ Kashmir after the abrogation of Article 370 and bifurcation of Jammu and Kashmir, the lik­e­lihood of a fresh diplomatic salvo com­ing its way from the United States was perh­aps not anticipated by policy planners.

The projectile is in the shape of a controversial description of the Kashmir dispute by President Donald Trump and with his renewed offer to mediate in India-Pakistan relations. Over the coming weeks, South Block mandarins will rack their brains over how to continue New Delhi’s engagement with Wash­ington without opening another front.

On August 21, the perennially unpredictable Trump stoked South Asia’s roiling volatility while speaking to newsmen in Washington, describing India-Paki­stan hostilities and their dispute over Kashmir as a “Hindu-Muslim” religious issue that has created an “explosive” situation in the region—a description no US administration since the 1990s has used. Trump also renewed his offer of mediation between India and Pakistan, totally ignoring the fact that India had categorically rejected a similar offer of his only weeks back. India had clarified that there was no scope for any “third-party” role to resolve its outstanding issues with Islamabad and that New Delhi preferred the bilateral track as enshrined in the Shimla Agreement of 1972 and reiterated in the Lahore Agreement in 1999.

Trump certainly has other ideas. Des­cribing Kashmir as a “very complicated place”, he said, “You have the Hindus and the Muslims and I wouldn’t say they get along so great and that’s what you have right now.” According to his folksy analysis, there are millions that want to be ruled by others and maybe on both sides and you have two countries that “haven’t gotten along well for a long time and frankly it’s a very explosive situation”.

Acknowledging his confabulation with both PMs, he said, “Kashmir is a very tough situation.” Trump said that while Imran Khan was recently in the US, he would meet Narendra Modi in France this weekend at the G-7 Summit. “So, I think we are helping the situation but there is tremendous problem between those two countries…I will do the best I can to mediate or do something.” Stre­ssing the “great relationship” he enj­oys with both Imran and Modi, Trump added, “A lot has to do with religion, religion is a complicated subject.” 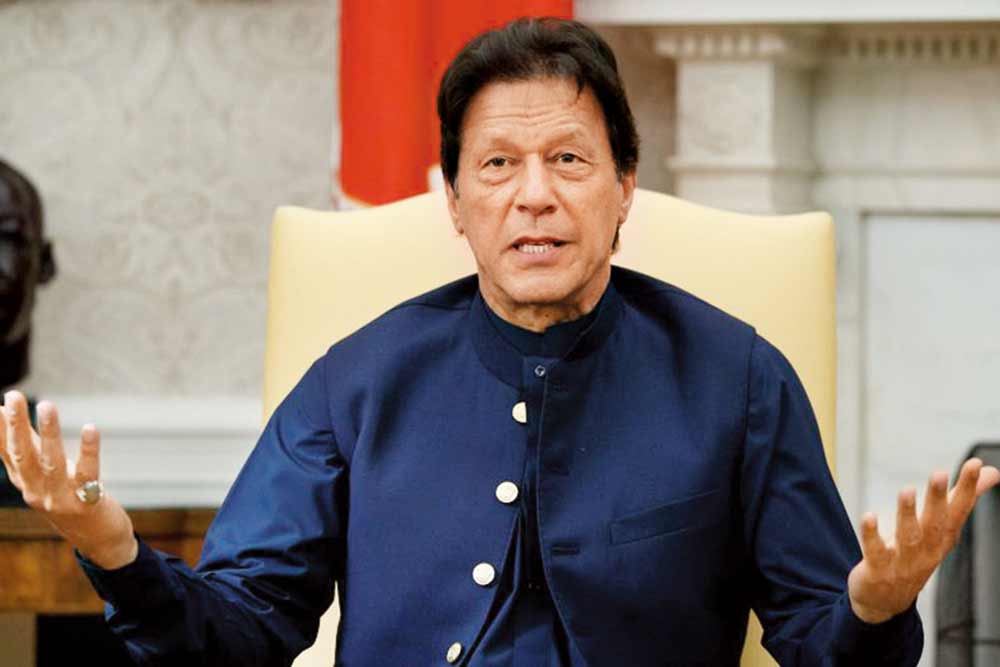 Behind Trump’s newest offer is Imran using the Afghan peace talks, hence US troop withdrawal, as a bargaining chip, feel many analysts.

Barely two days ago, on August 19, Trump had spoken with Modi and Imran over the phone in quick succession. “Spoke to my two good friends, Prime Minister Modi of India and Prime Min­ister Khan of Pakistan, regarding trade, strategic part­­n­er­­ships and, impo­rt­antly for India and Pakistan, to work towards red­ucing tension in Kashmir. A tough situation but good conversations#” he twee­ted.

How then should one analyse Trump’s solicitousness to red­uce India-Pakistan tensions? On the face of it, the pronouncements by the US Presi­dent look a little out of script. Trump, since coming to power in 2017, had single-handedly taken the lead to create tension in different parts of the world—from Iran to Venezuela. What to make of this keenness to douse the fire over Kashmir?

One possible reason could be the reset in Pakistan-US relations, the key to which is Islamabad’s ability to deliver the Taliban for a political settlement in Afghanistan, to be overseen by the US, which would then enable a smooth withdrawal of US troops from the war-torn country. With a presidential election knocking on his door, Trump is desperate to make good on this key promise he had made as president.

The second reason could stem from Trump’s self-image as a great deal-maker. He has so far made unsuccessful attempts to resolve disputes between Israel and Palestine; his attempt to find peace in the Korean peninsula has also proved elusive. If he could get India-Pakistan to restart their stalled dialogue until, at least, American troops are safely back home from Afghanistan, it serves his purpose. To the electorate back home, he could then sell himself as an effective deal maker and a leader who keeps his promise.

The challenge before India is to deal with Trump’s renewed offer to negotiate while trying to avoid diplomatic unpleasantness.

“India should stick to its core interests and tell Trump there was no scope for mediation in its dispute with Pakistan,” says former foreign secretary Kanwal Sibal. According to him, the US Presi­dent’s vigorous, renewed intent on mediation must have come after the Pakistani government convinced him that because of tension over Kashmir Pakistan was forced to deploy troops along its eastern border with India; as a result, it was unable to concentrate on its western front—Afghanistan. “Therefore, much of what Trump is trying to do is coming from a narrow, selfish interest,” argues Sibal.

But, despite his unpredictability, as president of the United States, Trump occupies prime position at the global diplomatic stage and cannot therefore be ignored. Moreover, India must look at ties with the US beyond Trump. Since 2000, bipartisan support for India in the US Congress has been established among both Republican and Demo­cratic legislators, resulting in deeper relations. Such understanding has now survived successive governments in both the US and India. Added to this is the support India enjoys from Silicon Valley entrepreneurs and the influential American corporate world.

This history of closer India-US relations over the past few decades—with a promise of its thickening even further—is the backdrop when PM Modi meets Presi­dent Trump on the G-7 Summit sidelines in France on August 24-25. Indications suggest that the usual cordiality between the two leaders would be in display, even though India will, perforce, politely turn down the US president’s offer yet again.

At one level, there is no pressure on PM Modi even if he were to agree to some form of mediation by the US President, as there are no major elections on the horizon where this could be exploited by the Opp­osition. But it is unlikely that Modi, who enjoys the image of a tough and decisive leader, would break with India’s sta­ted position and agree to “third-party mediation” to deal with Pakistan.

India has steadfastly mainta­ined—most recently in the UN after the Security Council’s clo­­sed-door deliberation on Kashmir—that while it is committed to build good relations with all its neighbours for collective peace and pro­s­perity in South Asia, it cannot be forced to the talks table with a country like Pakistan that continues to rely on cross-border-terrorism to push its agenda.

New Delhi, which had been a victim of Pakistan-based terrorism for decades, had taken a pro-active role to ensure Pakistan was put on the Financial Action Task Force’s (FATF) ‘grey list’ unless it showed visible, verifiable and irreversible steps it had taken against terror outfits based on its soil. This could well be the basis of PM Modi’s argument, Indian diplomats say, when he meets President Trump to discuss the Kashmir situation and debate the merits, if any, of a third-party mediation in India-Pakistan ties.

However, given the eagerness Trump has shown for a piece of action in India-Pakistan relations, it will be interesting to see how the world’s most powerful prima donna can be satisfied with watching fast-paced developments in South Asia from the sidelines.