Elections 2019: The Men Behind Akhilesh Yadav's Journey In Samajwadi Party

The Samajwadi Party chief Akhilesh Yadav is flanked by two veteran wellwishers as well as a talented, young team. 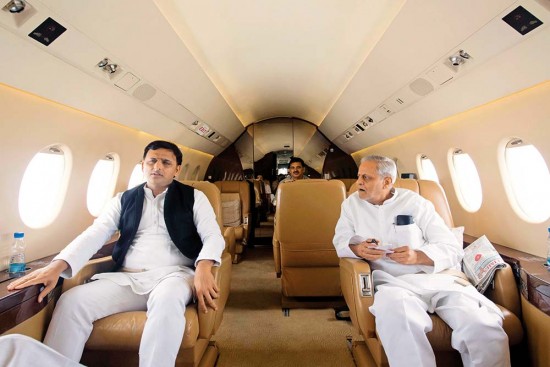 When “UP Ke Ladke” Akhilesh Yadav and Rahul Gandhi failed to stop the Narendra Modi juggernaut in the 2017 assembly elections, it is 65-year-old Rajendra Chaudhary (in pic above with Akhilesh) who advised the Samajwadi Party (SP) chief to focus on the caste maths. “Idealism is good but if it doesn’t get you in a position where you can practice it, what’s the point,” Chaudhary is believed to have told the young leader. This is how the seeds of SP’s formidable alliance with its arch-rival, the Bahujan Samaj Party, were sown. The SP-BSP mahagathbandhan has now become an example for other opposition parties to emulate. Elections: The Number Game

Soft-spoken Chaudhary is modest and credits Akhilesh for the alliance. “It was completely Akhilesh’s idea. He was willing to start afresh with Behenji (Mayawati). A united front was necessary to fight the BJP,” he tells Outlook.