People of Indian origin have collected quite a few of the award that honours out-of-the-box and weird inventions. Here’s a quick look at desi award winners over the ages. 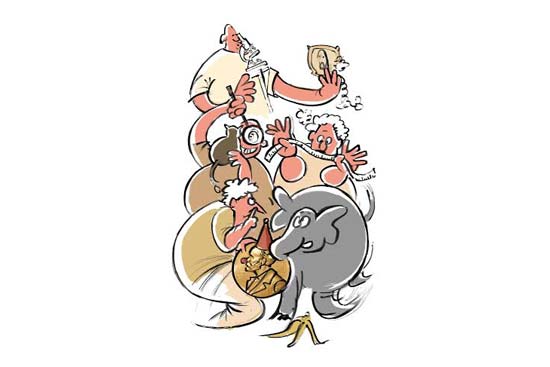 Atal Bihari Vajpayee and Nawaz Sharif, 1998: The then Prime Minister of India and the then Pakistan Prime Minister won the Ig Nobel for Peace for their aggressively peaceful detonations of atomic bombs.

Deepak Chopra, 1998: The guru from the Chopra Centre of Well Being, California, wins in the field of Physics for interpreting the subject of Quantum Physics in such a manner that it applied to increasing life span, curing life threatening diseases and pursuit of economic happiness.

Chittaranjan Andrade and B.S. Srihari, 2001: The Ig Nobel award in Public Health was presented to the duo from the National Institute of Mental Health and Neurosciences in Bangalore for their probing medical discovery that nose picking is a common activity among adolescents.

K.P. Sreekumar and G. Nirmalan, 2002: The duo from Kerala Agricultural University won in mathematics for publishing an analytical report finding out the total surface area of an Indian elephant.

Lal Bihari, 2003: This gentleman from Uttar Pradesh won the Ig Nobel in Peace for three reasons. One, for leading an active, fully functional life despite being declared legally dead. Second, for waging a posthumous campaign against greedy relatives and bureaucrats. Finally, for successfully creating the association of dead people. Lal Bihari overcame the handicap of being dead, and managed to obtain a passport from the Indian government so that he could travel to Harvard to accept his prize. However, the US government refused to allow him into the country. His friend therefore came to the Ig Nobel Ceremony and accepted the Prize on his behalf. Several weeks later, the Prize was presented to Lal Bihari himself in a special ceremony in India.

The Vatican, 2004: The Vatican was presented the Ig Nobel award for peace for outsourcing its prayers to India.

Lakshminarayanan Mahadevan and Enrique Cerda Villablanca, 2007: Won the Ig Nobel in Physics for their theoretical study of how sheets become wrinkled.

Sonal Saraiya along with Walter Belenky, Ian Humphreys and James Dworkin, 2014: Were awarded the Ig Nobel in Medicine for coming up with the method of nasal-packing with strips of cured pork for treating uncontrollable nose bleeds.

Shubham Bose along with Jie Tian, Kang Lee and a few others, 2014: Won the award in neuroscience for conducting studies to try to understand what happens in the brains of people who see the face of Jesus in a piece of toast.

Naren Ramakrishnan along with Jaroslav Flegr, Jan Havlí?ek and Jitka Hanušova-Lindova, and David Hanauer, 2014: Won the award in public health for investigating whether it is mentally hazardous for human beings to own a cat.

The Road To Reformation