'Indian Generals Don't Step Out Of Their Domain' 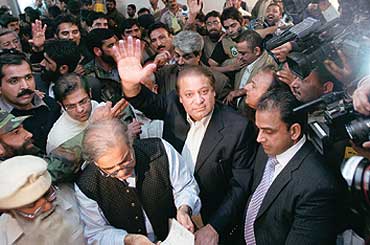 outlookindia.com
-0001-11-30T00:00:00+0553
Surrounded by two rings of security guards, former prime minister Nawaz Sharif rode the lion—his party’s election symbol—to maul chief rival, the King’s Party, with panache. Even though he barred himself from fighting this time around, Sharif has emerged as a key player because he read the people’s mood right. Excerpts from an interview with Seema Sirohi in Lahore.

Will you avenge your humiliation by President Musharraf?

How will you energise the Indo-Pak peace process?

We are the architects of the peace process. If it has slowed down, we will speed it up. But I always stand for good relations with India, the peace process—resolving our issues through negotiations. This is my agenda. You are witness that I quoted the example of India when I was talking to journalists earlier that, "Look at India, their generals don’t step out of their domain. It is only Pakistani generals who do that." I have said that openly.

How serious is Gen Kiyani in trying to distance the army from politics?

Let him do his work. Let us concentrate on ours. I don’t want to make any comments. His statements seem to be good. They appear to be according to the spirit of the Constitution. I think it’s a good thing, a positive development.

Do you think the civil society movement has reached critical mass?

Yes. It will only go forward. And it will bring true democracy. It will. It is picking up momentum.

Democracy Is A Big Deal