'India Will Have To Fight Its Own Battle'

His comments tinged with realism about the lack of formal guarantees to India of a 'Phase II' in the international war against terrorism that would strike at Pak-sponsored terrorism, a combative Union home minister L.K. Advani spoke to Ishan Joshi. E 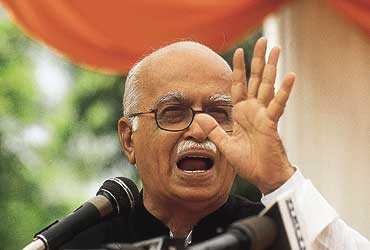 But it has remained theoretical…
Yes, it's theoretical.... But in actual practice, they've been reluctant even to take positions. We don't expect them to do anything; it's our problem and we have to surmount it. But our emphasis has been that the problem is state-sponsored terrorism. And so, any state that promotes, sponsors or harbours terrorism should be declared a terrorist state. Countries like America, if they declare any country as a terrorist state, consequences follow. This is not true about, say, the UK; that is the logic of a unipolar world. But they've been reluctant to do so.

Has this changed after September 11?
Let's see, let's see. Because the problem is, for them the Taliban regime had not been recognised but bin Laden's organisation, Al Qaeda, has been proscribed, unlike Lashkar-e-Toiba or Jaish-e-Mohammed.

Has this perception changed? Whither 'Phase II' of the war against terrorism? Is there going to be one?
I think that the dynamics of the situation would lead the world towards that position.

But no assurances as yet?
We have not asked for any assurances.

Let me clarify this: you say this is your assessment and analysis based on the events which are unfolding rather than anybody having told the government something concrete?
Also on the basis of what they have been conveying to us privately. They say 'We cannot, when we want to have Pakistan as a front-ranking ally in this situation, be saying things about Pakistan we do believe in'. So I have told whosoever I have met, like the US ambassador and the British PM, that people are disappointed. When Tony Blair asked me, 'Tell me candidly what the people in India feel about us', I said the people of India are unhappy with your attitude. I said we in government can understand strategy dictates you have Pakistan on your side but for the common Indian, terrorism is Pak-inspired terrorism. And he is not able to digest how a terrorist state, which has given us trouble for over a decade, has become the front-rank US ally in this war against terrorism. He is not able to digest that. And so, they are unhappy but that at the same time we can understand. We can understand, provided it is really a war against international terrorism and not merely an operation to avenge September 11.

What do they say to this?
They keep saying yes, it is...

Does 'Enduring Freedom' have a Phase II? Will the US also target terrorist camps in PoK subsequently?
They say so.

But they don't say so officially...
It's understandable (given their priority).

America, Israel and India: that's said to be the targets for Islamic extremists. There is a growing feeling India may be attacked as it is seen as the softest target of the three. Is 'hot pursuit' an option?
Firstly, after coming into government I have never used the phrase hot pursuit. I've used the word proactive constantly and which I use even today (vis-a-vis fighting terrorism in Kashmir). But there are some words which need not be used though internationally they are accepted; that in certain situations it is legitimate for a country for its own defence to resort to that. I can only say that the statement made by the prime minister after October 1 is significant. It was not just strong words when he said that there is a limit to our patience.

In the end, it is going to be an Indian fight...
Yes, yes. I've always maintained that it's our problem and we have to solve it. But if world opinion is of a nature which takes cognisance of the menace that is a terrorist-promoting state, it would be of help to us in our fight. And I visualise this present phase (of the war against terrorism) as assisting us. Not physically but at least in terms of the climate created, in terms of the constraints imposed on Pakistan.

So you expect the direct fallout of this Phase I, once it is over, to be that the Americans will actually put pressure on Pakistan to stop sending people across the LoC?
I think so. Because, see the language and attitude of the leader of Pakistan himself. I don't call it a change. I think these are the constraints imposed upon him by the situation itself.

But will Musharraf last?
That's the big question. If there are heavy casualties in Afghanistan, what would be the impact on Pakistan? There are demonstrations and just this morning there has been a fire in the army HQ at Rawalpindi. I have said from the day this crisis began that Gen Musharraf's position is unenviable.

Will India's 'proactive' policy in Kashmir continue?
Post-Kargil, terrorist activity increased considerably. Since then, it has been the same conventional (military) approach which is bound to yield results though the cost we are having to pay is heavy.

Exactly. You have already tried a 'proactive' policy...
(Interrupts) But there have been phases in between. For different reasons—because we initiated a dialogue with certain sections and because we felt that since the people of J&K have had to go through a lot of anguish, we will give them relief—certain steps were taken which did not pay because the terrorists took advantage of them. There is no question of letting that happen again.

Is the threat of terrorists using 'biological, chemical and even nuclear weapons' real or just theoretical?
No, it is not a theoretical one. All inputs indicate the Taliban has access to biological and chemical weapons and depending on how the situation develops in Pakistan, I believe even the US is apprehensive lest any wayward group gets hold of nuclear weaponry. I'd not like to create panic but this reference was made on substantive inputs.