Mainstream America's getting a dose of Indian dazzle. There's a buzz in Manhattan. Now it could spread. 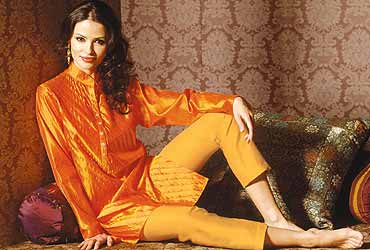 outlookindia.com
-0001-11-30T00:00:00+0553
A year ago it seemed like a fantasy—Indian designers showcased in a major department store in Manhattan. After all, breaking into the upper reaches of the American fashion market isn’t easy. We are not talking cheap "garment export" stuff manufactured by the tonnes in India and shipped for retail in overseas markets for mass consumption. This is different. And last week, the fantasy came alive, complete with luxurious clothes, arched doorways, decorative lamps and tassels as hundreds of seen-that-done-it New Yorkers gaped at the windows—all 28 of them. Lord & Taylor’s flagship store on 5th Avenue was "Into India" and so were the eager, chattering buyers.

Four of India’s top designers had captured a definite spot in the more exclusive floor space of the store with their silk jackets, quilted kaftaans and funky mirrorwork dresses for the celebration. Within hours of the full-page ads in the New York Times hitting the stands, a woman had called from California and booked all the four dresses featured in the double spread. Full-page ads in InStyle, New York and W—all glossies—created more buzz. Within four days, 39 per cent of the featured merchandise was sold. The four designers bursting into black-is-always-right Manhattan with considerable colour and panache were Rina Dhaka, Vivek Narang, Manish Arora and Tarun Tahiliani. Narang said he already has "re-orders"—a sure sign that something had clicked in the American woman’s mind as she surveyed the clean lines and rich fabrics. Thankfully, the clothes were non-fussy.

Actually, a lot of things clicked before that. Jacqueline Lundquist, wife of former US ambassador Richard Celeste and Indian designers’ tireless advocate, decided it was time mainstream America got a bit of Indian dazzle—something she thrives on herself. She had met Marvin Traub, the long-time chairman of Bloomingdale’s, during his 30th trip to India, and showed him her collection. Traub’s wife was inspired to buy several outfits herself which she wore to many oohs and aahs at New York’s black-tie events. High society was interested. When Lundquist returned to the US, Traub introduced her to Jane Elfer, the newly-appointed president of Lord & Taylor. Elfer, an energetic ideas woman eager to change her store’s somewhat staid image, decided to go for a costume change. Young and adventurous, she took the plunge on Indian designers, committed big bucks on advertising ($3,50,000), promotion, cocktail parties and of course, the clothes.

The time was right, her instincts on the mark—mainstream America was very interested in India in general—Madonna’s henna having made it down the chain via Moulin Rouge, Monsoon Wedding, bindis, Bend It Like Beckham and assorted India-ana. If the response stays hot, Indian designers will spread to many of the 90 L&T stores across the country. Lundquist is "thrilled" that her effort is paying dividends. It has been a hard journey from doing "trunk shows" in the US two years ago, lugging suitcases full of clothes, ironing and sending e-mails to gather a crowd to finally having the luxury of a formal launch at a store with a limousine to pick them up. "The reason the whole thing was so lavish and on the scale it was is because it came from the top management. We didn’t have to go to buyers and then to store managers to get them interested," she said.

The order, reportedly worth $5,00,000, was placed in March and Elfer wanted delivery in April. "Usually there is three months’ lead time but they wanted this event to lead into Mother’s Day (on May 11). " The fact that all four designers managed to deliver at such short notice was another remarkable thing. How they did it is another matter and no one wanted to talk about it. They are already planning their next delivery—L&T wants to do a Diwali show. Given New York and New Jersey’s large South Asian population, it could be a major draw. Cleverly, it would "pre-empt" the "Holiday Season" of December when the whole country goes mad shopping for Christmas in a din of advertising.

Could this then be the beginning of a beautiful relationship with India? Like, are we talking big league? Narang, whose simple designs were a sellout, says it is too early to tell. "We have a long way to go" before declaring conquest in America. But if they catch on eventually, it’s a gold mine because everyone knows, no one shops as much as the Americans.