Zero Instead Of 99! Marksheet Blunder Drives Students To Commit Suicide In Telangana

A blacklisted IT firm made a mess of the evaluation system of the Telangana State Board of Intermediate Education's examinations. Out of 9.74 lakh students, a whopping 3.28 lakh failed! 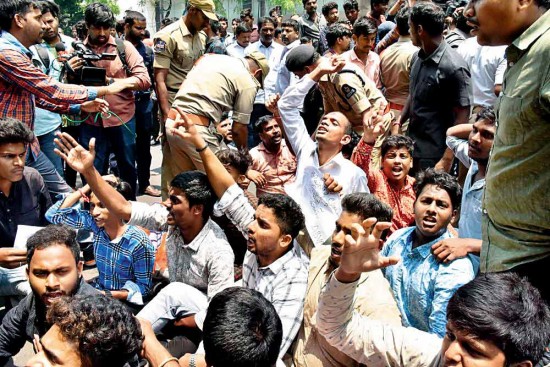 “Never in my wildest dreams did I feel that one day I have to suffer the trauma of my daughter’s suicide, who was an above-average student with 80 per cent marks thr­o­ughout school. She scored 90 per cent in the first intermediate, but failed in the second,” cries Sirisha’s father Lakshamaiah, from Warangal.  Such were the heartrending laments of other parents whose wards ended their lives due to the botched up evaluation process in the Telangana State Board of Intermediate Education’s (TSBIE) examinations.

A total of 9.74 lakh students wrote the Intermediate examinations held in Feb­ruary-March, out of which an astou­nding 3.28 lakh failed to secure pass marks. The marksheets of many verged on the biz­arre—abnormally low marks  scarcely possible to fetch. A girl from Mancherial district got ‘00’ in Telugu, instead of the 99 she actually scored. Till now, 25 students have taken their own lives.