Winners And Losers In Naveen’s Blitzkrieg

Odisha sarkar’s ad spend is drawing more flak than ever 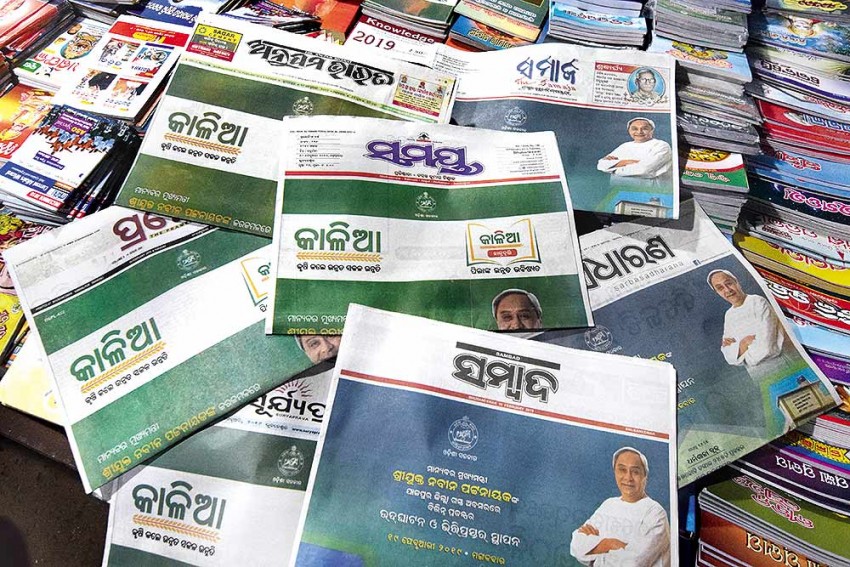 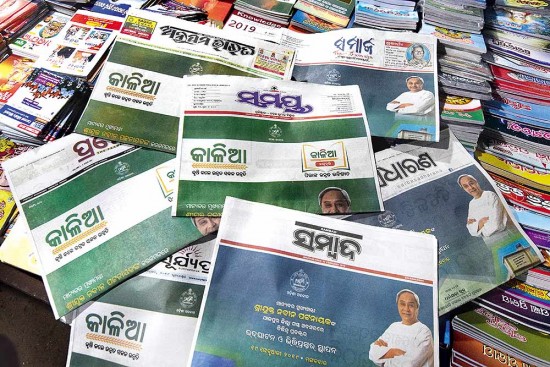 The media in Odisha never had it so good, especially the newspapers. In the past six months, hardly a day has gone by without full-page colour advertisements ann­ouncing the launch or extolling the achievements of some government scheme or the other on the front pages of leading dailies—invariably with CM Naveen Patnaik’s smiling visage towering over all else. There was no let up in the blitzkrieg even on the morning after the Pulwama attack on February 14, inviting widespread outrage on social media.

Answering a question from BJD MLAs Mahesh Sahu and Debashish Nayak dur­ing the recent session of Odisha’s 16th assembly on February 7, Information and Public Relations (I & PR) minister Pratap Jena revealed that a cumulative amount of Rs 92.44 crore had been spent on ads to various media outlets in the state since June 1 last year, with newspapers predictably cornering the lion’s share (Rs 82.51 crore). Comparing this eight-month expenditure with the ad spend in the 2016-17 fiscal—Rs 40.47 crore, as per the I & PR department’s res­ponse to an RTI query by activist Biswajit Mohanty (figures for 2017-18, for reasons not clear, have not been given)—shows a big jump in this election year.

The sizeable ad cake has been used to reward media houses toeing the BJD’s line and to ­punish others.

The sizeable ad cake has also been used to reward media houses that toe the government line and punish those who don’t. For example, Sambad, the largest circulated Odia daily, whose owner-­editor Soumya Ranjan Patnaik joined the ruling BJD last March and became a Rajya Sabha MP, has cornered over Rs 10 crore of this Rs 82.51 crore, while Odisha Television (OTV)­—No. 1 new channel in the state, owned by the family of Baijayant ‘Jay’ Panda, who has been at loggerheads with Naveen­—has not got a paisa in ad revenue from the government in 2018-19. Kalinga TV and News World Odisha, among the channels with the lowest viewership as per BARC rating, have received Rs 1.03 crore each.

Among the others who lost out in the ad revenue sweepstakes are Sanchar, owned and edited by veteran Biju Patnaik-era leader and former minister Dr Damodar Rout, who was expelled from the BJD a few months ago after a bitter fallout with the party supremo, and Nirvay, which has been consistently critical of the Naveen government.

In reply to a question by Kailash Chandra Kulesika of the Congress earlier, the minister had said an amount of Rs 226.85 crore had been earmarked for all government publicity, including ads, in the 2018-19 budget. A senior official in the I & PR department, however, dismisses any suggestion that the increased ad spend has anything to do with the general elections. “Firstly, the number of schemes has increased exponentially necessitating greater expenditure to spread the word,” joint secretary Niranjan Sethi tells Outlook. “Secondly, there has been a huge increase in the number of TV channels and web portals, which account for a larger outlay. Then there is field publicity through hoardings, which was not there earlier.”

As per the minister’s reply, the ad spends on TV/radio and web portals since last June were Rs 9.49 crore and Rs 43.30 lakh, respectively. Something does not add up.

While the minister’s reply in the assembly said Rs 82.51 crore had been spent on newspaper ads between June 1, 2018, and January 31, 2019, the reply to Mohanty’s query put the expenditure at no more than Rs 1.28 crore between April 1, 2017 and October 31, 2018. Asked about this discrepancy, Sethi says, “Though newspapers are supposed to submit their bills within a week of the publication of the ad, they often take six months or more to comply, resulting in delayed payment. The amount quoted by the minister in the assembly takes into account the payment actually released since the RTI reply. Thus, there is no discrepancy.”

Mohanty suggests the actual publicity budget is much larger because the figures given out by the minister and the RTI reply only cover expenditure incurred by the I & PR department and doesn’t inc­lude ads released by PSUs owned by the state government. “I am filing another RTI query to get those figures,” he says.

But will this ad overkill help Naveen sail though the elections? Nirbhay editor Navin Das, for one, believes otherwise. “Past experience suggests that a misma­tch between publicity and gro­und realities actually backfires on the government,” he says.