Winner Is Coming: The Game Of Numbers

A look at the constituencies which registered highest and lowest voter turnouts, breaking past records. 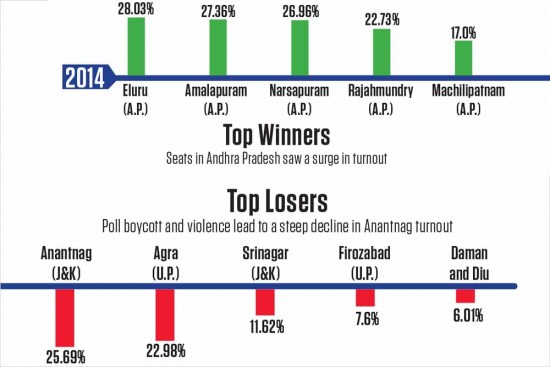 Questions that the voter turnouts raise:

• Andhra Pradesh is among four states which have hit record highs in voter turnout since the 1962 Lok Sabha elections. Five constituencies, namely Eluru, Amalapuram, Narsapuram, Rajahmundry and Machilipatnam have all voted above 80% with the former four gaining more than 20% turnout compared to 2014. While TDP chief Chandrababu Naidu says the bump favours his party and falls in line with the Assembly election trends, YSRCP has taken the other line- that anti-incumbency is taking a toll. Whose line is it, anyway?