Inadequate compensation, fast exhausting relief material and discrepancy in assessing damage to property is making villagers in Bhoisahi in Satapada district gasping for their future 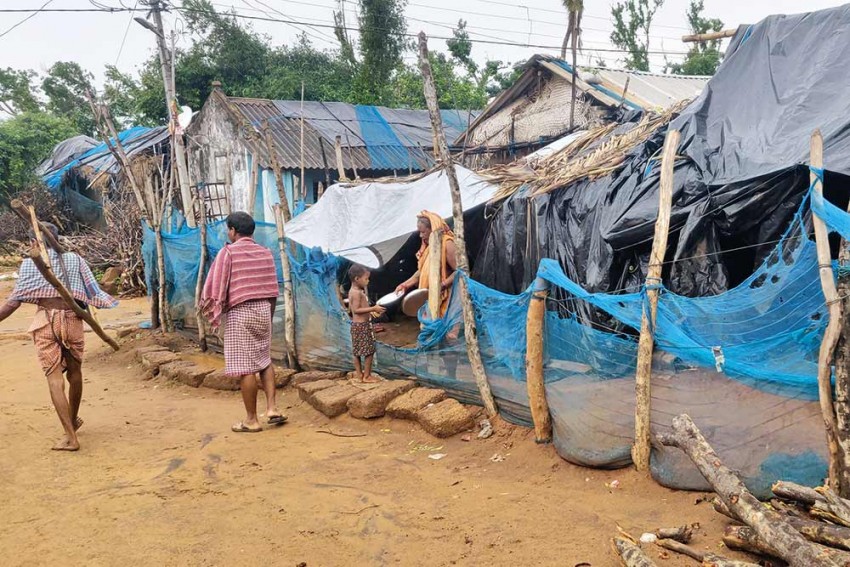 Stormed
Bhoisahi villagers have been living in these temporary ‘homes’
Photograph by Sandeep Sahu
Sandeep Sahu July 17, 2019 00:00 IST Why This Fishing Village In Chilika Lake Is Struggling To Stay Afloat After Fani Nightmare 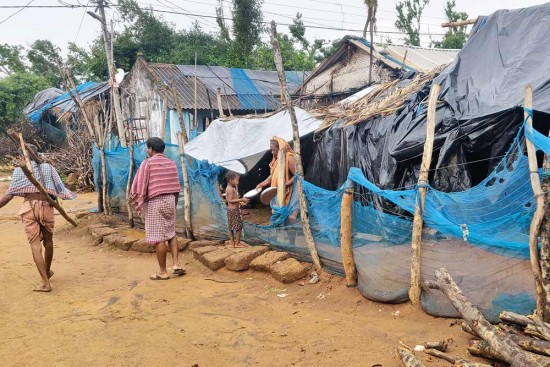 Polythene sheets have been made into makeshift roofs. A little distance away, the mud houses people once lived in lie in heaps of rubble. Shabby-­looking children loiter on the village road; the elderly while away their time in the temporary bamboo structure built by Save the Children outside the village to serve as the community dining place. Take a stroll around the village and it bec­o­mes clear that more than two-and-a-half months after Cyclone Fani ­devastated the Odisha coast, life is yet to become normal in the worst-hit Satapada area of Puri district.

Welcome to Bhoisahi, a village of 85 families under Satapada block predominantly inhabited by Bhois (a scheduled caste). With no land—not even homestead land—of their own, the majority of people in the village used to earn their livelihood by fishing in the Chilika, the largest brackish water lake in Asia. But that was before the cyclone. With their boats and fishing equipment wrecked by Fani, there is little they can do to feed their families.

“U Mumba, a Mumbai-based NGO, has already announced that the free kitchen they have been running since the ­cyclone won’t be there after the end of this month,” says villager Golam Mohammed, sitting in the makeshift community dining hall. “We shudder to think what we will do after that.” Ano­ther villager, Bharat Chandra Nayak, adds: “The 50 kg rice we ­received from the government in the immediate aftermath of the cyclone was exhausted long back. Once the free kitchen stops, we will have little option but to beg to feed our families.” At least 20 young men have left the village in search of work after the cyclone, vill­agers tell Outlook.

At least 20 young men have left Bhoisahi, a ­village of 85 families in the worst-hit Satapada area, in search of work after the cyclone.

A little enquiry reveals that none of the villagers, almost all of them ill­iterates or semi-literates, had licences for their boats or insured their fishing equipment, which is costing them dear now. Almost everyone in the village says 50 kg rice, Rs 2,000 and a polythene sheet they got immediately after the cyclone is all they have received by way of government help so far. “People in nearby villages have alr­eady got compensation for their damaged boats. But the government has forgotten us, maybe because we are Harijans,” rues Nayak.

Ajay Kumar Bhoi, a Hindi teacher in the local school and a social worker, says there have been serious discrepancies in the survey conducted by the government to assess the damage to houses caused by Fani. “Houses completely ruined have been shown as ‘partially damaged’,” he tells Outlook, pointing to Artatrana Bhoi’s house as proof. Artatrana nods in affirmation. For the record, those who had their houses ‘fully damaged’ are entitled to a compensation of Rs 95,000, while those left with ‘partially damaged’ houses would get Rs 45,000. But that is in the distant future. Most beneficiaries have received just Rs 3,200 as the first instalment so far.

Except for around seven families, ­including Golam Mohammed’s, most people in the village don’t have pattas for their homestead land. And none of them has heard of the ‘Vasundhara’ scheme under which the government is duty-bound to provide four decimals of homestead land to every landless ­family in the state. Sanjulata Bhoi, a widow, says in the absence of a patta, she can’t get a caste certificate, which would have allowed her to admit her teenaged daughter in the local school. Some people received the first instalment of Rs 20,000 under the erstwhile Indira Awas Yojana in 2016, but nothing since then. “After paying the manda­tory Rs 5,000 PC (percentage commission, a bribe) to the sarpanch, we were left with just Rs 15,000. Instead of giving us the next instalment, offici­als are asking us why we haven’t built our houses,” says a visibly angry Nayak.

It is understandable that houses damaged by the cyclone would take time to rebuild. But here people have to sleep on an empty stomach well over two months after Fani.

By Sandeep Sahu in Puri