Why So Upset, Kunal Kamra?

A 21st c stand-up comic and a 19th c Bengali bhadralok editor meet to compare notes on the augustness of our courts…. 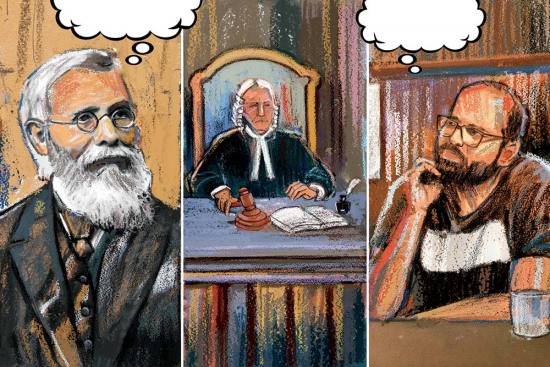 On January 28, 2021, Kunal Kamra filed an affidavit in the Supreme Court of India stating that no judicial office in India was above jokes and satire. He had earlier tweeted a saffron-tinged image of the Supreme Court with the Indian national flag on its rampart replaced with the flag of the Bharatiya Janata Party. He had also described a Supreme Court judge, who had given a decision in favour of a rich litigant as “a flight attendant serving champagne to first class passengers after they’re fast tracked through, while commoners don’t know if they’ll ever be boarded or seated, let alone served”. Both of these tweets, Kamra implied, were satirical, meant to “afflict the comfortable”. They could not be contempt of court since neither were intended to insult the court nor could the court’s reputation be diminished by “a few jokes on Twitter”, he contended.

On May 4, 1883, Surendranath Banerjea filed an affidavit in the Calcutta High Court stating that no contempt could lie from his writings which were intended to promote the public good. In the Bengalee magazine that Banerjea owned and edited, he had written a sharp piece criticising Justice John Norris of the Calcutta High Court. Banerjea had described Norris as “unworthy of holding a high judicial off­ice” and asked the authorities to “put a quietus to the wild eccentricities of this young and raw dispenser of justice”. In the affidavit, while he maintained that his actions were bona fide he unreservedly apologised for basing the article on a report in The Brahmo Public Opinion, which was later found to be inaccurate. He also expressed his regret for “having unwittingly endeavoured to cast an undeserved slur upon the said Hon’ble John Freeman Norris”.